I’ve had it up to here with digital light processing (DLP) 3D printers! These days, there’s a new one being released every week! So what’s the big idea? Well, they’re capable of creating high resolution prints rather quickly by reflecting light from a projector onto UV-curable resin. Now, if only they could bring the price, usually much more than $2k for desktop machines, down to something more affordable… 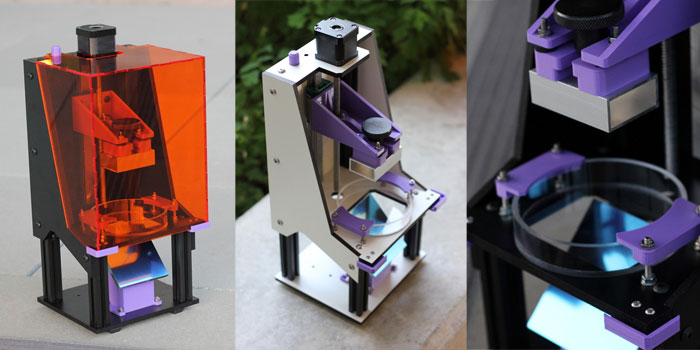 “Hey, Mike!” you’re saying, “Did you hear about the LittleDLPer?” Of course, I have! What do you think this post is about? See, the LittleDLPer is a DLP 3D printer that has a super low (projected) price tag of $500. The machine’s creator, Brad Hill, is currently in the process of launching his Kickstarter campaign (should be coming out around June 28), at which point he’ll be selling the printer at various reward levels in order to obtain bulk pricing on the parts to build it.

The LittleDLPer is open source, so you’ll have the opportunity to build your own from scratch. Hill has said that he originally used a $95 projector from eBay, but upgraded to a $310 unit, so, if you build your own, you may be able to do so for a couple hundred less than the $500 kit price he’ll be offering on Kickstarter. If you’re psyched about owning your own DLP 3D printer, but lack the technical skill or free time to build your own, Hill will also be offering the printer at $1000 in preassembled form.

Hill’s DLP machine is pretty little, with a build volume of 60mm(X) x 40mm(Y) x 100mm(Z) (2.3” x 1.6” x 3.9”). According to the project’s site, it takes about 2 minutes to print 1mm with a layer height of .05mm. So, “a 40mm tall object would take approximately 80 minutes to complete.” Though the site doesn’t explicitly state what layer height resolutions the printer is capable of, it sounds as though it can print heights of .05 mm and the images of prints made from the LittleDLPer are quite impressive.

Due to the controversy over 3D printer manufacturers using unlicensed 3D designs for promotional purposes, Hill has included a warning about the 3D printed models displayed on his site: “Click on image for Thingiverse source information, if you are the owner of one of the models and would like us to remove the print from our gallery please just let us know on our contact form.”

Because there are new DLP and SLA 3D printers being announced every week, I can always honestly say that I’m considering purchasing each one. This time, I’m particularly excited about assembling my own and definitely give props to Brad Hill for keeping his project open source.