We received an enigmatic email that read “Just figured I’d pass this info along about a new printer that’s about to start its crowdfunding campaign”, followed by a link and nothing more.  The link was to a new desktop DLP 3D printer called the M-One. The translucent orange paneling, characteristic of DLP machines, lets you know immediately that the M-One uses light from a projector to cure photoreactive resin.  As DLP 3D printers have the potential to create highly detailed prints, it’s possible that the M-One will offer a new alternative to FDM/FFF desktop machines when it launches its Kickstarter campaign. 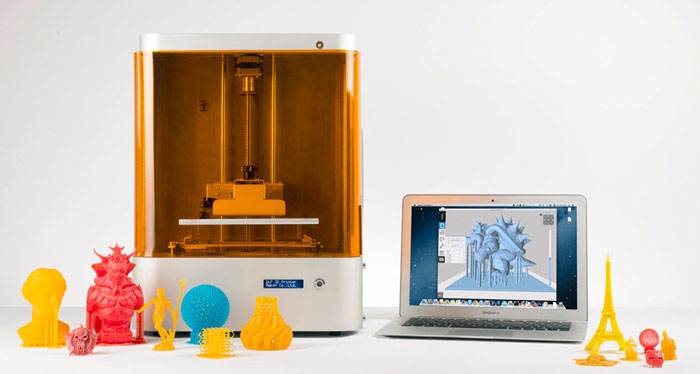 The M-One is the product of a Chinese company called MAKEX. On the product’s site, we’re told that the machine has a build volume of 150 x 110 x 160 mm (5.9” x 4.3” x 6.3”), can create features up to 150 microns in resolution and layers up to 20 microns in thickness.  The compact machine uses only 100 mL of resin to produce a print and any material not cured to create your object can be recycled for subsequent print jobs.  EnvisionTEC, the leading manufacturer of DLP 3D printers, often bills their machines for use in the fields of jewellery and dentistry. With fine detail and the ability to cast metal objects from DLP prints, it’s likely that the M-One may be used for such purposes, as well.

No word on the price yet. So far, their FAQ page simply reads: “We are preparing for the kickstater now, M-ONE will be available soon, and the price is compatible.” If it’s low enough, it may be able to compete with desktop stereolithography machines such as the Form1 and the Pegasus Touch.  I’m starting to think that the next printer I get might not be an FDM/FFF machine and, for the right price, it could be the M-One.  We’ll definitely let you know when their crowdfunding campaign starts! Until then, you can watch a video of their M-One prototype printer below: