Students from Iran and Australia have joined forces to take part in the Maker Empire’s first ever Global Design Challenge.

Year 5 students from the Nima School in Tehran and Year 6 children from St Michael’s College, Adelaide, weren’t competing in the traditional sense. Instead they used their growing design skills to help demonstrate their own country to the foreign students.

Both schools began with the simple premise, finding the buildings and structures that mark their countries apart. They found iconic landmarks that their country is famous for.

The Australian children settled on:

The Iranian contingent settled on the following:

The students were then given the Maker Empire’s 3D design app to create models of some of their respective nations’ most famous landmarks. This simple concept meant the children learned far more about their own history in a bid to teach children half way around the world about their culture. 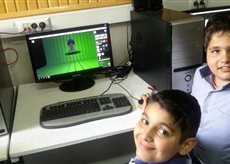 The classes were encouraged to make their models as accurate as possible in the architectural and spatial sense, so they worked hard to study monuments that they may have taken for granted and not really paid attention to in the past. It made them look at their own country’s national treasures through fresh eyes.

After the designs were finished, the other class printed the models, thousands of miles from home. So the Sydney Harbour Bridge soon took pride of place in a Tehran classroom, while the Tomb of Cyrus made its presence felt in Adelaide.

The kids ‘meet’ in the debrief

The two countries then get together on a video call to discuss their models and answer any questions that the other school had for them. It was the first time the students had a chance to actually ‘meet’ and they were all excited by a project that brought two very disparate cultures into such close contact. The ancient tomb was a novelty for the Australian contingent, too, and Luna Park certainly made an impact on the Iranian children.

Now the schools are turning this social experiment into an exhibition in both schools. Once again they’re certain to bring their own cultural flavour to their respective events and it will be interesting to see how the two exhibitions differ.

Whatever happens, it’s a great initiative from Maker Empire. 3D printing is slowly becoming the norm in classrooms around the world and this is a perfect example of how a little imagination and some modelling prowess can bring kids into contact with cultures and landmarks that even their parents have never heard of.

A scale model sparks a child’s imagination and can spur them into learning about the subject. So whether it’s a tomb in Iran, a Civil War rifle or an accurate model of a T-Rex, a 3D printer can be a powerful tool in a bid to educate the next generation.

We haven’t even begun to scratch the surface of what is possible. But initiatives like this one are a huge step in the right direction. If 3D printing can bring together Iranian and Australian students, then perhaps it can help unite kids around the world.