LOHAN to Get High Enough to See Stars: 3D Printed Spaceplane from The Register 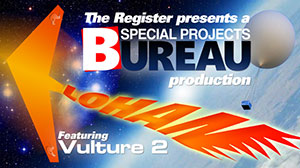 Not since Lance Bass was going to shoot himself into oblivion has a celebrity made space-related headlines like The Register’s PARIS and LOHAN projects. In 2010, the Special Projects Bureau of UK tech blog The Register created the Vulture 1 spaceplane as a part of Project PARIS. PARIS, which stands for Paper Airplane Released into Space[1], saw a paper airplane carried up to the edge of the Earth’s atmosphere via a helium weather balloon and released, earning El Reg“the record for the highest launch of a paper plane in the history of aviation” and garnering a good deal of media attention.  The Special Projects Bureau is kicking it up a notch with project LOHAN and their rocket-powered Vulture 2 spaceplane. This time, the Vulture is 3D printed. 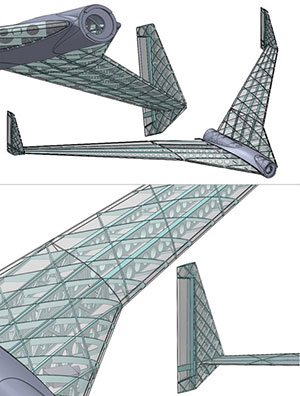 LOHAN, or Low Orbit Helium Assisted Navigator (LOHAN), will feature a spaceplane that is far superior to its predecessor.  After being lifted to the edge of the Earth’s atmosphere by a weather balloon, the Vulture 2, with a rocket motor and an autopilot system, will be released and its GPS will guide it to a designated landing point.  In order to house the onboard electronics, camera, and motors, the Vulture 2 will need a much sturdier body.  Thus, the Special Projects Bureau turned to 3D printing.

Postgraduate students from the University of Southampton and Professor Jim Scanlan have teamed up with the Bureau to design the spaceplane, using their previously crafted Southampton University Laser Sintered Aircraft (Sulsa) as the basis for the Vulture 2.  And UK 3D Printing service firm 3T RPD is in the process of printing the plane as I write.  Then, on September 14, the team will get LOHAN as high as possible (as is her preference) and, based on a preset release altitude, let the Vulture 2 go to, hopefully, glide gently back to this Earth.  Here’s a video of The Register team discussing the 3D printing of their spaceplane:

Will LOHAN’s climb result in a devastating crash? Or will the Vulture be gingerly guided to a safe landing? The world waits and watches with bated breath for the celebrity to be brought down to planet Earth.  For the full story, visit The Register’s LOHAN-dedicated channel, filled with double entendres like “LOHAN lifts skirt on 3D printed parts” and “LOHAN’s fantastical flying truss menaces kiddies”, here.

[1] According to Wikipedia, “The use of the word ‘space’ in the project’s name refers to ‘near space,’ not ‘outer space,’ since it was not planned for the vehicle to ascend to an altitude above the Kármán line (the ‘boundary’ of outer space, defined by the Fédération Aéronautique Internationale as 100 km (62 mi) above the Earth’s surface[4]); it is nevertheless a project that is closely related to the concept of private spaceflight.”