Until now, several different groups of researchers have developed small masses of tissue as implants, but now they are trying to create a clear path to their actual use.  In Japan, scientists have made progress towards using a 3D printer to fabricate custom-made skin, bones, and joints.

“A next generation bio 3D printer” is in the works, according to Tsuyoshi Takato, a professor at the University of Tokyo Hospital.  The printer is being designed to print thin layers of biomaterials to form custom-made parts for various uses.

His team combines stem cells and proteins in order to trigger growth, as well as a synthetic substance with comparable properties to human collagen. Takato said that the goal is to print materials that closely imitate the structure of organs. For example, one challenge is to print a hard surface with a spongy inside to mimic bones.

Apparently, in only a few hours, the printer can transform CT scan data into a printed implant.  He continued to say that these implants can quickly be accepted by real tissue and other organs in the patient.Takato described the process, saying, “We usually take cartilage or bone from the patient’s own body (for regular implants), but these custom-made implants will mean not having to remove source material.”

A group of potential benefactors includes children born with bone or cartilage problems.As typical synthetic implantsdo not work with these children, due their body’s rate of growth, they may be the best suited to the researchers’ process.

One of the biggest technical issues with conventional 3D printers is the amount of heat they generate, which would damage the living cells and protein.  Takato wants to tackle this problem, saying, “We haven’t fully worked out how to avoid heat denaturation but we already have some models and are exploring which offers the most efficient method.”

Developed by Fujifilm, the protein that Takato and his team have been studying was first used as collagen inphotographic film.  Thisfilm collagen does is not derived from animals, reducing the risk of dangerous infections, and the human body does not reject it as a foreign body. 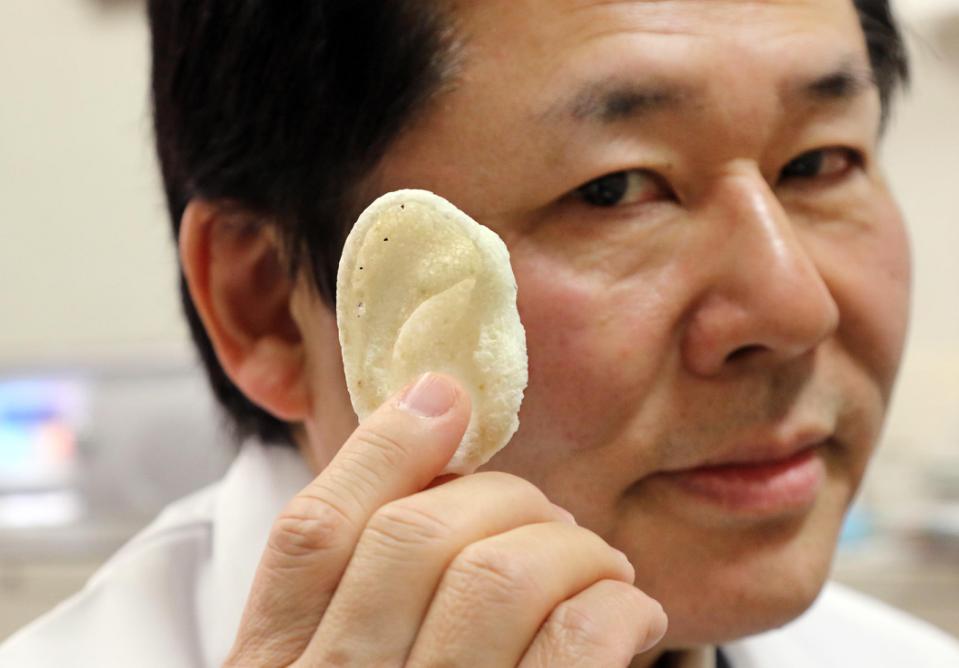 The researchers say that their current research is built upon a previous project called “CT-Bone“, developed in tandemwith governmental institutions and Tokyo-based firm Next 21. The substance used for CT-Bone was calcium phosphate, as seen in real bones, but without the stem cells currently being used by Takato and his team.  The way it works is that the CT-Bone implants are first inserted places where bones might be missing or are broken.  The implants act as scaffolding to aid in bone growth.  After two years, the growth from the CT-Bone will encapsulate the implant in new bone grown from the body.

Tests done on animals suggest that this type of regeneration could go even faster when collagens, stem cells, and growth stimulus are all applied. CT-Bone could be used on patients soon, as Japanese medical authorities are expected to grant approval of CT-Bone by the end of this year.

As for their new research, this is a medical application of 3D printing, and as such, it is subject to lengthy tests and strict regulations.  It will take about three years until Takato and his team can start clinical tests of 3D-printed skin.  After that, they will proceed to testing bones, cartilage, and joints.