An Interview with Joe DeSimone, Carbon founder and CEO

Prof. Joe DeSimone co-founded Carbon in 2013. In this interview with 3D Printing Industry he gives insights into the adidas project, how Carbon are currently working with metamaterials and why he believes powder based 3D printing will struggle.

Carbon made headlines earlier this month when the Silicon Valley based company announced plans to take production of 3D printing parts to unheard of levels.

While the build volume specifications of the adidas machine are still under wraps for now, DeSimone says Carbon has achieved a 3D printing speed on the z axis of, “over 2500 millimeters an hour. That’s not what we do the shoes at. But we have the capability of going very fast.”

He adds, “we’ve been able to crack the code of how to get into production with high quality and fast printing that is literally just tens of minutes now.”

In addition to adidas, Carbon has announced partnerships with companies including BMW and GE. I asked the CEO about his vision for the industrialisation of additive manufacturing,

What we started to realize was where customers really won on economics and throughput was this recognition that if you design a product on a fabrication tool that doesn’t allow you to scale it up – we call that prototyping.

It’s one of those ‘aha’ moments, you can’t even let engineers and designers get too creative on their designs and their prototyping because they absolutely know they cannot scale it up. what is happening with our customers is that if you design a product on the means of production, then it’s fundamentally different.

DeSimone explains for the adidas project they went through 50 different versions of the running shoe. “These were functional shoes, and they were been designed on the means of production,” he says. Typically for new product adidas, “might do 4 or 5 versions in an 18 month cycle,” he adds, “and we just started talking to adidas a year ago.”

This is a crucial point for DeSimone, “customers who design on the means of production can really rapidly introduce new products more quickly.”

3D printing: the means of production

DeSimone explains that by enabling a rapid product development cycle,

DeSimone is understandably proud of Carbon’s accomplishments. The decentralization of manufacturing, the digitalization of the supply chain are things that, “everybody has been talking about and reading about for decades. The problem is that the technology has not kept up with the potential.”

When you step in with a technology that has the quality and the speed, and opens up the scale – then all those aspirational visions that people that been writing about and knowing about for a decade all of a sudden get unlocked.

The secret behind the speed

For DeSimone the adidas project is not only about materials and speed. But, “really this is a story about software,” he says. Specifically, “software control of chemical reactions to grow these parts.”

A few weeks ago we were at 90 minutes for a print and now we’re under 30, and we’re going to be at 15 minutes pretty soon, this was all done with process optimization and so that’s software.

After some initial smaller batches, adidas will begin to scale the 3D printing of their shoes until production volumes in the tens of millions are reached.

As a materials scientist I struggle to see how people who are sintering powders, or just using SLA resins with just light, are ever going to get to the the kind of properties that one needs in an end use application.

You’re never going to get the surface finish or the full density or the mechanical properties that one needs.

DeSimone continues, “Liquids are scaleable. For liquid chemistry the cost of goods is a really strong function of volume.”

The ability to set the shape of an object using light, and then using heat to set the properties? Really only reactive chemistries that are able to chain extend to get the high molar mass polymers after the part is already shaped is what we do. And our ability to mix and match and fine tune components in a reactive system allows us to be really successful to get the properties that one needs. 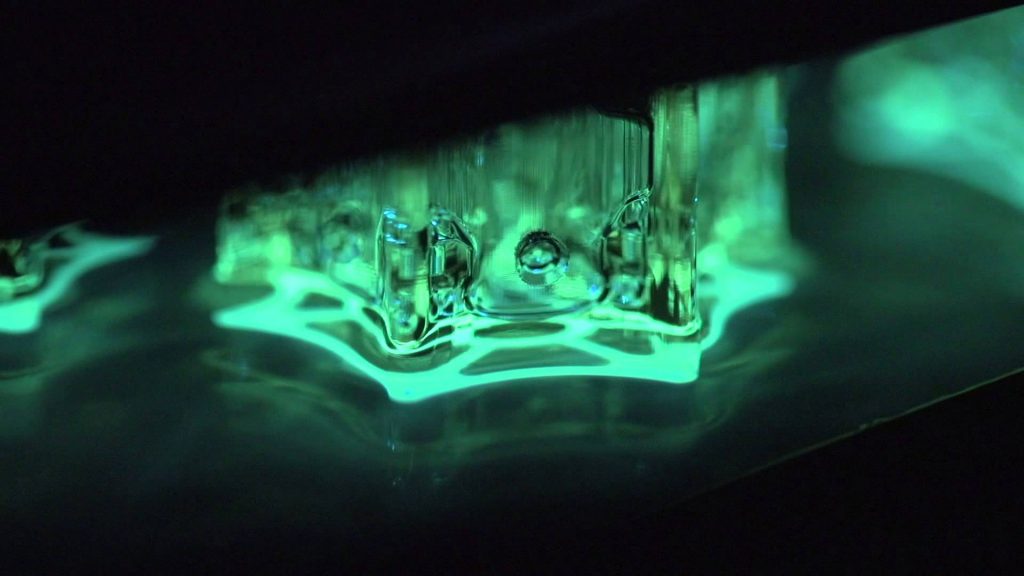 The Carbon CEO explains how for the past 17 years, adidas have been collecting data on individuals and athletes. Working with Carbon and their Finite Element Analysis (FEA) tool, the sporting company will “take individual data and develop an algorithm using our FEA tool that can develop a lattice design for an individual’s gait and personal performance characteristics.”

This gives a critical insight into how 3D printing technology will be applied by manufacturers such as adidas, and also as part of the smart factories of the future.

The process Carbon is developing means manufacturers have “an end use traceable part.” DeSimone explains that, “one thing is having that information but the other one is how do you design a factory where you can actually build products for customers. So traceability throughout every step of the process, from printing to washing, to baking to fullfillment.”

With this Carbon plan, “to change the way people design, engineer, make and deliver the product to the customer. We’re building all the tools that really help our customers get to production.”

We have built texture tools where you just go, even at the .stl file level, and pick your texture, pick the size of your features and your texture and just paint whatever surface you want and push a button and it’s done.

A texture tool might be for a relatively simple, but functional purpose, such as aesthetics. For example, automotive interior components, and putting a texture on a car dashboard. “We’re able to put those kind of finishes on automotive interior parts,” says DeSimone.

However the tools can also be used in a more advanced manner,

We’re able to put complex textures on the inside of airfoils or air ducts and things that control the fluid dynamics with textures. We’re able to put textures related to medical devices that foster applying torque and other things like in dental or so on, there’s quite a few places where textures can play a role.

“If you’re going to try and do mass customisation at scale, the digital traceability of the parts through the factory, all the way to customer fulfilment is critical,” says DeSimone. He adds, “and that’s what we do.”

The challenges around developing reliable, repeatable industrial 3D printing solutions stem in part from the complex interactions between the trifecta of hardware, software and materials. I ask DeSimone about overcoming these challenges. “With my academic background I have been living at the intersection of science, engineering and medicine for the last 30 years,” he says.

His experience means that he understands, “the role of convergence and how does one actually work collaboratively, collectively.” Carbon want people who are, “really interested in tackling important problems, revolutionising manufacturing, revolutionising medicine, revolutionising sports and human endurance.” DeSimone says, “that’s who we attract at Carbon.”

Metamaterials and the future of additive manufacturing

Having discussed the present at Carbon – and in the wider 3D printing industry – our conversation turns to the future of additive manufacturing.

Metamaterials are amazing, and one of the key things you need for a metamaterial is a great elastomer. And we are absolutely making amazing metamaterials and they are going into all sorts of comfort, headgear and protective systems and crush panels on automotive, so there’s quite a bit going on.

DeSimone says that this activity includes looking at, “lattice structure made out of materials that have a high mechanical modulus, to high elasticity, to tunable structures with amazing designs, we’ve spent a lot of time in that space.”

Mechanical engineers have been taunting the world on the value of a lattice for making meta structures. But lattices have been basically limited to bridges and buildings or wherever you stress an individual part.

But now to make these amazingly complex lattices, often biomimicry has not been possible. There have been a lot of theoretical papers, for making one one-offs, but been able to make them at scale and at quality is what we do. We do a lot in that space.

This work involves in-house expertise, but also given his academic background and network, “some folks from Cambridge and Tufts University and others” have stopped by.

This combination of applied science and a determination to “stop prototyping” is the reason why Carbon continue to make headlines.

“Carbon is really focused on production, and I think we’re uniquely positioned in that regard,” says DeSimone. With his company attracting a sizeable number of votes in the 3D Printing Industry Awards this is something our readers seem to agree with.

For all the latest 3D Printing Industry news and and insights from additive manufacturing leaders, subscribe to our free newsletter and follow our active social media channels.