Inspiring Real Kids in the Real World with 3D Printing

On Tuesday I tweeted a link to some press coverage about the opening of a new advanced technology centre — at a high school. Well I attended said opening yesterday, having been invited to cover the event — with lots of hats on (not literally) — and I have to say, it was one of the best events I have ever attended. As you read this, please bear in mind that this is a local event to me and I do apologise for the personal overtones, but the issues covered are representative of a global issue. 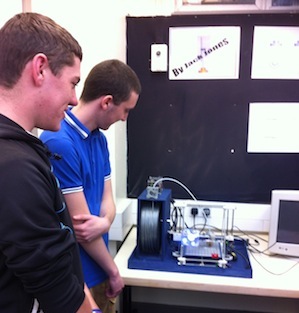 Inspiring is often an overused word, but here it could not be more appropriate. The opening of this facility brought together an eclectic mix of people with one thing in common — they were all excited about 3D printing technology being made available to the students of Holywell High School in Flintshire, North Wales. The kids were, unsurprisingly, reticent about chatting — they’re teenagers! I have one myself, so I know how that goes. But I did spend some time watching them around the working tech and interacting with it — they were inspired, enthusiastic within their peer groups and they lit up! It was brilliant.

The facility has been purpose-built within the school to house a range of 3D technologies donated to the school by an ex-pupil, who is also a parent of current students and a local business owner that has been working in the 3D printing industry for 20+ years. With his wealth of experience, Andy Allshorn set up his own company, AT 3D-SQUARED, in 2007 and is fully committed to putting the tech into the hands of the younger generation. Having known Andy for many years I can vouch for this personally, he is both passionate and vocal about this issue, and has more than proved it by putting his money where his mouth is, which all came to fruition yesterday. Andy has donated a range of equipment to the school — as well as the entry-level 3D printer there is also a 3d laser scanner and a design suite that incorporates haptics — all supplied by A1 Technologies, specialist suppliers of 3D technology for education. Beyond this, Andy has also placed a stereolithography (SLA) machine in the school — on loan — which is a first in a UK high school, as far as I am aware. Yesterday, Andy also pledged to continue to add to the equipment range each year, an announcement that delighted everyone there.

The sad fact is that without external partnerships with parents or local companies, most schools can only dream of acquiring this sort of technology portfolio for their students to experience. Talking to Mr Hoosen, head of faculty for the design & engineering department, I was taken aback, to say the least, to learn that the department’s budget for the year is £1200!! I knew education budgets were an issue, but that is truly disgraceful. How on earth are schools supposed to produce employable designers, engineers and technicians that are so desperately needed across industry now, with the skills gap set to grow further over the next 20 years in our rapidly expanding manufacturing sector? No I’m not deluded, more on that later!

Mr Hoosen also woke me up to the fact that for D&T in particular the national curriculum itself is a limitation that prevents true innovation. “Success in this subject is not about an exam result,” Mr Hoosen told me, “you learn more about D&T from a failed project than you do from a successful one.”

I know a few industrial designers, and at least one Editor that will concur with this – [Comment below gents!]

While delighted with the ‘shot-in-the-arm’ that yesterday’s event provided for the department and the school, it was gratifying to learn that Mr Hoosen’s ultimate goal with this technology suite is to produce employable youngsters and provide them with a future in one of the most exciting sectors within Wales — design and engineering.

And according to Professor Bill O’Neill of the Institute of Manufacturing at Cambridge University, the VIP that opened the centre yesterday, Wales, and more broadly, the UK is a burgeoning manufacturing nation! Bill cited many facts and figures to support this claim — I didn’t get them all down, but one indicator was that Rolls-Royce, Jaguar Land Rover and others will need to more than double their work forces in the next 20 years because, despite mainstream coverage, the message coming out of these companies is that production is increasing dramatically. Bill was delighted with the resources he saw at Holywell yesterday saying it was exactly what modern manufacturing was all about and would contribute to developing the skill sets that industry requires.

His most striking comment, to me, was his insistence that “this technology makes a real difference.” As far as I am concerned he was preaching to the converted, but I just hope and pray that that comment penetrates through to the local politicians, teachers from other schools and members of the press that were also in attendance.

To sum up, Holywell High School is a beacon in the morass of bureaucracy that afflicts educational systems and politics around the world, enabled by the vision and generosity of a parent and technology insider. But it is not the only one — fortunately — there are more and we will share others with you here soon. Here on 3D Printing Industry we will also be encouraging members of the younger generation to share their experiences and opinions of 3D printing too — after all, they will drive the future of this technology further than any of us dinosaurs.