It’d been awhile since I caught up with Gaël Langevin and his awesome InMoov robot, but when I did, I found that Gaël was still able to impress. The robot, designed by a prop sculptor based in Paris, was a side project that quickly turned into a front project.  With no prior robotics experience and with the help of strangers he met online, the sculptor created a 3D-printed robot with all parts available for download free of charge.  When l last left him, he had gotten the head, arms, and torso designed and built and had the robot partially responding to voice commands. In addition, users the world over were downloading the parts to build the robot themselves.  Gaël’s success since then has been remarkable.

First off, Gaël’s robot hand, which led him down the robot hole in the first place, made it onto the cover of The Atlantic magazine for use in an article on the future of medicine.  The project was later covered on CNN’s blog and also became the main feature in an issue of the French magazine Science & Vie Junior that will be totally devoted to robots.  So, InMoov is reaching its way into the mainstream 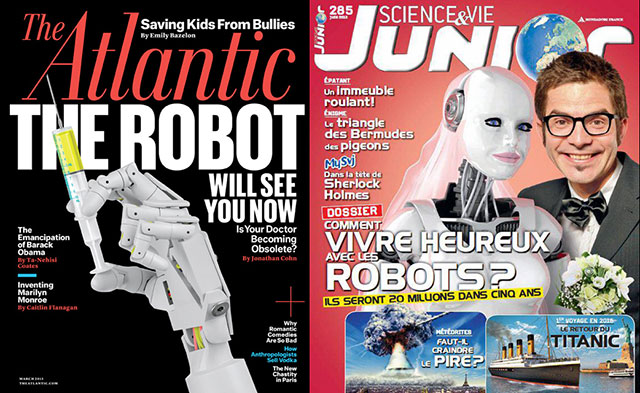 More importantly than InMoov’s press, though, is its actual technical development. While the humanoid looks very similar to how it did six months ago, it’s made some significant progress. Not only has he made a space in its torso where he will install a Microsoft Kinect, but Gaël is also in the process of creating legs and feet that will both look human and support the weight of the servo motor-filled, plastic robot. 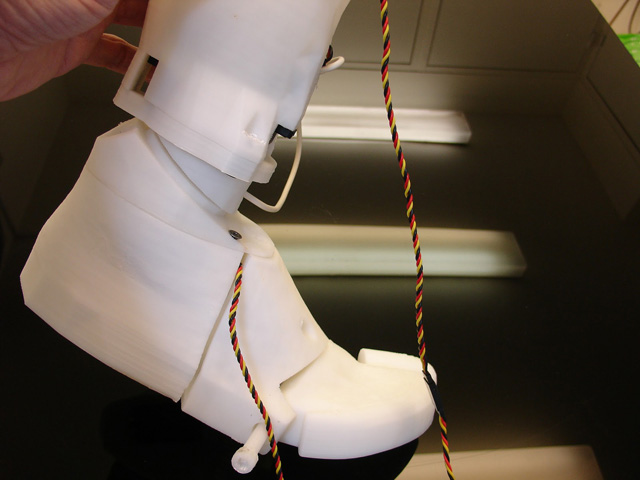 InMoov now has a neck motor that allows its head to tilt and GroG, the programmer, has been working on InMoov’s vision tracking and its memory. He wants InMoov to be able to learn tasks! Most of that brain work is still happening behind the scenes, but what Gaël has shown us is that the robot can be controlled with an iPhone. Before the iPhone control was explored by Gaël himself, it had already been developed by another user online. The user, Brancante, used an iphone app called TouchOSC, to move the fingers of his own copy of the InMoov hand. Gaël then applied the same process to the entire arm.

I don’t think I realized when I last wrote about the project just how much of it was being developed by people other than Gaël. The project has become so open source that there are users who have begun printing their own working parts without even acknowledging the source. This has caused Gaël to be reluctant in the sharing of important files, like InMoov’s face, but even the violation of his polite attribution copyright hasn’t stopped him from eventually posting such items, with Gaël saying, as he released the robot’s face, “Giving is the best gift you can get.” Part of the enthusiasm for the project is that every user seems to feel like part of a team, sharing information over the InMoov forum, responsible for the humanoid’s development. So, if Gaël wants a solution to the robot’s hearing problem – the microphones in its ears have difficulty picking up voice commands over the sound of the robot’s motors working- for instance, he’ll have to keep the designs open source and hope that someone on the other side of the planet will have the answer.

And by maintaining his open source policy, Gaël receives the benefit of users germinating InMoov even further across the Earth’s surface, as evidenced in an extremely interesting event to take place in Utrecht, Netherlands on May 25. Nothing could be a better symbol of the InMoov project than this: 50 3D printers run by a team of hackers and makers from ProtoSpace are going to print, build, and program InMoov in a single day – a world record, Gael suggests.

I know I’m not quite ready yet, but someday soon, I think I’ll try to build my own InMoov.  Perhaps everyone will.  In fact, Gaël, GroG and another builder, Chris, have made it even easier for beginners to get started.  They’ve constructed a simpler robot that one can build utilizing an Arduino, a motor, and a single InMoov finger, allowing users to program and command an InMoov with an ease that will encourage them to go further.  This tiny design, called the InMoov Starter, will allow almost anyone to make a little piece of InMoov in their own home. 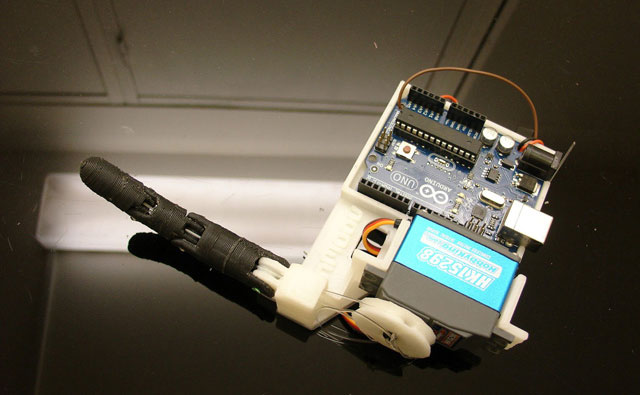