Fact: 100% of people building their first 3D printer have never built a 3D printer before. So, for about 60 teachers at O’Maley Innovation Middle School in Gloucester, Massachusetts to put together 27 3D printer kits with no previous experience isn’t completely nuts. After all, someone from the school would need to construct them for the school’s new tech lab. So, O’Maley’s School Technology Specialist Dave Brown and Science teacher Amy Donnelly put out a call for volunteers.

At GoodMorningGloucester, Jim Dowd relays the tale of the O’Maley 3D Printer Make-a-Thon, in which 60 locals help assemble the 27 MakerFarm Prusa i3 kits purchased with a donation from the Gloucester Education Foundation with nothing but the parts themselves and a series of videos by a young Maker named Colin, which Dowd describes as “like your college roommate on Saturday night after you’ve been studying all day and he’s been ‘hanging out’ and now he’s trying to explain Kirkegaard to you. Colin is a genius to be sure and you love the guy, but you and he are on different planes of reality right now.”

Brown and Donnelly acted as the supervisors of the enormous community build and, though they have their own technical backgrounds, neither had experience with assembling 3D printers. The reason for the unassembled kits was the price difference: with their GEF grant, the school could have bought fewer machines and provided 3D printing access to a small group of students or they could have bought 30 kits and opened them up to a far larger number of students. 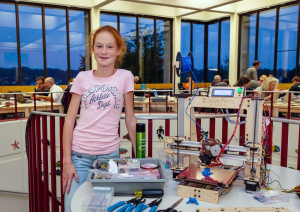 A few kits were first put together by students at the beginning of the summer as part of a project where they had to 3D print their own utensils for a Mexican fiesta, so the group had a few models on which to examine. In fact, one of those students was one of the few people with experience at the build. Of course, after assembling them, they had to get them running. After 16 hours of work one Saturday, no one had been able to extrude any plastic. It wasn’t until Sunday night that the group had finally completed 22 of them and had them running. Then, over the course of the rest of the week, the final five were to be finished. 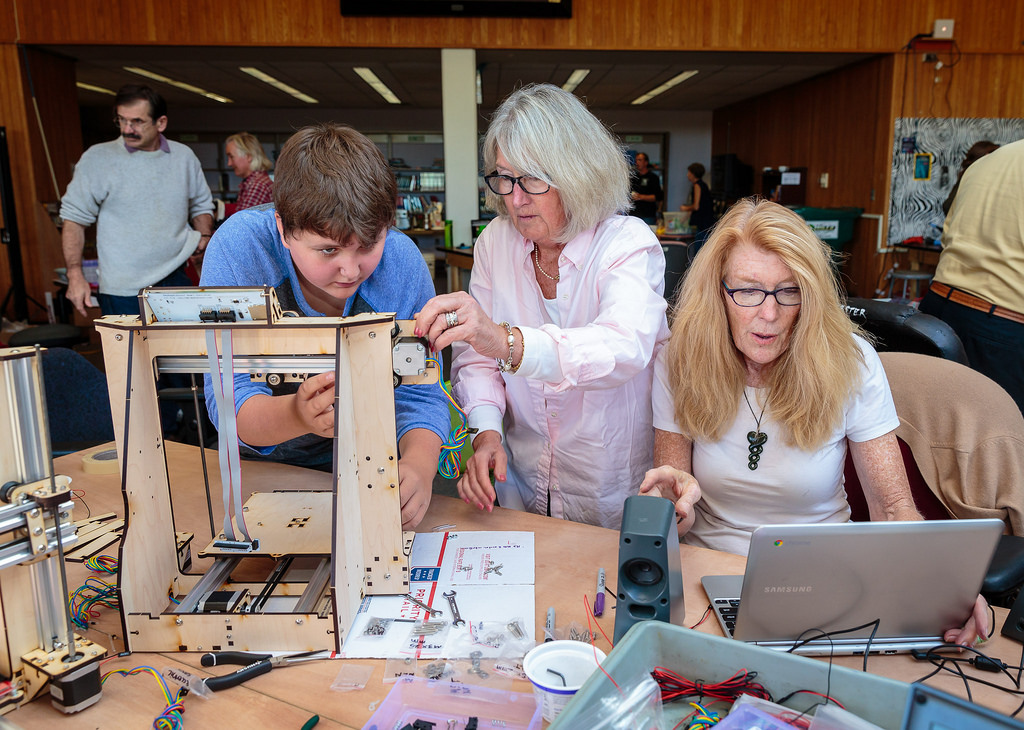 Dowd says of the whole experience, “It really was a community event like no other I’ve ever been a part of. People were deep in this project, way deep. We’re still coming back to reality. I want to say that I don’t think there a lot of places that could have done this. Where else do you find 600+ hours of competent volunteer time from people who will give up a whole weekend, and who have the DIY chops to throw together a complicated piece of hardware like this? To me it speaks of the best of Gloucester, the stuff that makes it impossible to consider ever living anywhere else. Fanatical devotion to each other, the unrepentant love of a crazy plan, dedicated visionaries to make it all work and a railtanker full of coffee.”

Though Gloucester might be the perfect community to do such a group build, it’s also indicative of the community formed in response to Maker projects. “You mean we can build a sweet piece of technology all by ourselves? But because we need to rely on collective know-how we’ll have to work together? I’m in!” That sorta thing. So, as technology gets more affordable and DIY friendly, further enabled by local manufacturing/3D printing and the Internet, maybe more builds like this one will take place. And, in the near future, maybe these 21st century barn-raisings won’t just be for school labs, but for local wind farms and low-income housing blocks. Soon, the world will be made up of tiny villages again, all connected by the World Wide Web!