From Clicks to Bricks – a New Era of 3D Printing Retail

The year to date has already brought us several new companies and their take on 3D printers – with some receiving more publicity than others. However, while practically all of the respective companies’ address the consumer market,  sales and marketing efforts have typically consisted of e-commerce alone. For any potential customer wanted to actually see what a 3D printer looks like with his/her own eyes, the opportunity to do so outside of tech fairs, non-commercial fabbing community gatherings or university (fab) labs have been practically nonexistant.

The introduction of this groundbreaking technology and its implications have also been understandably difficult to grasp and understand for some – especially with the much of the buzz surrounding the 3D hive being about declamatory topics such as nanoscale technology or printing organs – it is therefore no wonder that the term 3D Printing itself does not yet grab people’s attention as much as it deserves to. In order for 3D printing to truly become a household term, literally, it needs to be seen and evaluated more easily in the physical world of ours, not just on a website. As potential users are given greater opportunities to see first hand the possibilities with these (consumer grade) machines, the hype is destined to turn into sales – for the companies that seize the day. 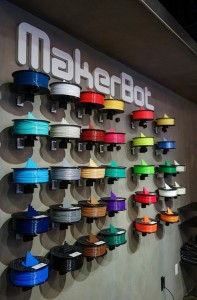 As for the innovative companies wishing to differentiate from the mass 3D printing battlefront, the concept of bricks and clicks is now slowly being introduced to the market. The first two physical stores to be opened in the US are MakerBot’s store in Manhattan and Deezmaker’s take on the subject in Los Angeles. Even though they launched around the same time, the approach of these two companies appears to be somewhat different.

MakerBot’s store is a flagship store designed to emphasize and showcase the possibilities of the company’s new Replicator 2 and other in-house 3D printers, targeting a hip, urban NY crowd. All items shown in the store are for sale and naturally made by MakerBot Inc. The Replicator 2 itself is given a pedestal, as the company wishes to push both the aesthetics and the performance of this new machine to early adopters.

The Deezmaker store, from the makers of budget-friendly Bukobot, on the other hand, is more about the technology  itself – clearly directed to a more tech-savvy audience. They also carry other manufacturer’s printers such as MakerBot and ORDBot. As the man behind Bukobot, Diego Porqueras believes that at this evolutionary stage of 3D printing each machine has its own unique features making it more suitable for some purposes than others. The store also offers classes for the people interested in learning more about the technology and its applications as well as networking opportunities with other like-minded people.

The success of these two pioneering stores could determine the appearance of other bricks and mortar 3D printing stores popping up in the near future. We hope so anyway, and we will keep a close eye on both MakerBot and Deezmaker and their audiences and naturally, we will report on them in the future.