Bre Pettis is CEO of Makerbot, the Brooklyn based 3D printer manufacturer that brought the world the Cupcake, Thing-o-matic and more recently the Replicator2 3D printers. He is also, quite possibly, THE poster boy of the 3D printing industry. With an easy manner and natural exuberance — particularly when it comes to bringing 3D printing to the masses — Bre has lead Makerbot through its start-up period and into the realms of corporate success. Bre is a champion of the Makerbot brand specifically and 3D printing more widely and has contributed greatly to the ever growing awareness and uptake of 3D printing and its applications.

Rachel Park met up with Bre at the recent 3D Printshow in London, and the result is the second in 3DPI’s Executive Interview Series. 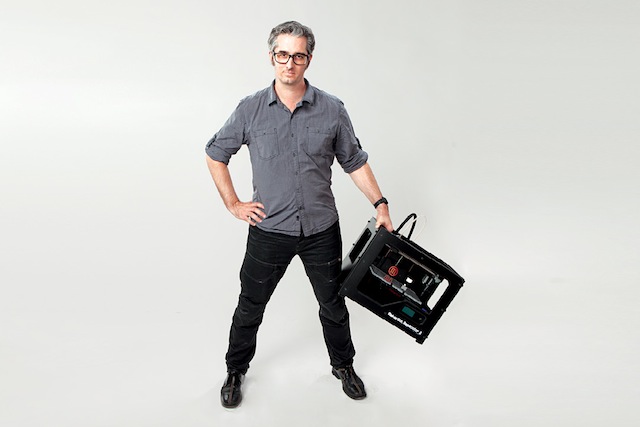 3D Printing Industry: The 3D Printshow generated great excitement about the tech and what it is capable of – you seemed to be in your element. Has is been a good show for you? What is your most memorable moment?

Bre Pettis: I was blown away by the 3D Printshow and the buzz that it’s created. We had quite a few members of our team on site and we were all inundated by people wanting to know more and see what 3D printing can do. The Makerbot room was constantly full of people and I had a blast. For me personally – it was an honour to be involved in the presentations for the 3D4D challenge, but my highlight has to be Cosmo Wenman’s mind-blowing sculptures – I love them! And not just because they are printed on a Makerbot. A lot of other people were impressed too. We put up a blog post about the sculptures on the Saturday of the show and in just two days, it became the most viewed blog post in MakerBot history!

3D Printing Industry: Replicator 2 was a great PR accomplishment that got lots of people talking around the 3DP industry and community — from your perspective what was the reaction like from MakerBot users? Have you had any specific feedback since the machines started shipping?

Bre Pettis: It is so rewarding to keep hearing back from people that love their new Replicator 2 Desktop 3D Printers. One customer reported, “From unboxing to setting up my first print it only took 15 minutes whoo!” Our customers are a passionate and creative bunch and with the Replicator 2 I believe that they have a much wider scope for creativity. The fact that it is a plug and play system also means that more people can get creative now as well.

3D Printing Industry: With regards to Replicator 2: PLA — no ABS — why is that?

Bre Pettis: This just makes so much sense to me. We have put a lot of R&D into this and the new MakerBot PLA Filament is the perfect source material for making detailed, beautiful, professional-quality models and final products. In real terms, our materials research department has put countless hours into developing a reliable filament that sticks to the platform without peeling, cracking or curling. And even better, the MakerBot PLA Filament is highly reliable even without a heated platform, which saves our users around 32% in energy costs. We supply it in a range of colours and effects, including translucent, fluorescent; not to mention glittery and metallic (I hear you quite like glittery?? )

On top of that, we have not got rid of ABS altogether because the MakerBot Replicator 2X Experimental 3D Printer operates with both PLA and ABS filament.

3D Printing Industry: The Replicator 2 brings a dramatic change in aesthetic to MakerBot 3D printers. How important was that in the development process and why?

Bre Pettis: Yes, it does. Real design is what makes companies great and I’m not talking about just the design of the product’s functionality. Customers expect good products to just work, and so they should, but what really counts is the passion behind the vision that is revealed in the product’s look and feel, its cool aesthetics and how the customer feels when they see it. I think the Replicator 2 shows something of the real vision — and passion — that MakerBot has for 3D printing and what it can do. And even more importantly, our customers are saying the same thing. 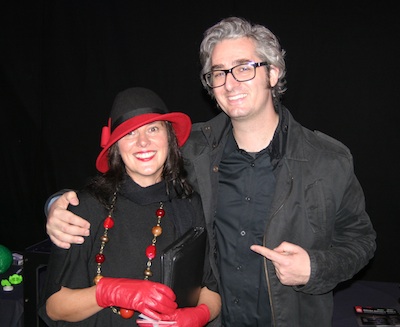 3D Printing Industry: Can you tell me, specifically about the improvements “under-the-hood” of the Replicator 2, and why this is now a “Prosumer” machine?

Bre Pettis: It was important to us to take the MakerBot Replicator 2 to the next level and I think we have done that and done it well. I totally believe that it is the easiest, fastest, and most affordable tool for making professional quality models. I know, I would say that but just look at what people are doing with it! The Replicator 2 is setting new standards in resolution (100µm layer) and accuracy for true-to-life models and the increased build volume (28.4 x 15.5 x 15.2 cm or 6691 cm3) is a big improvement in line with what people were telling us they wanted. The Replicator 2 is also now constructed with an industrial strength pressed steel frame, which, apart from making it look better, makes it perform better too, because it is durable enough to withstand high 3D printing speeds. All in all, these improvements make the Replicator 2 a reliable tool — one that professional designers can take seriously and use in their workflow.

Since we started selling the new MakerBot Replicator 2 (launched September 19, for anyone unaware of the date) we’ve seen purchases from hundreds of companies with huge staffs of engineers and product designers. This is exactly who we designed this new machine for. Everyone from auto part manufacturers to toy designers (and every kind of designer in between) are realizing the power of a more affordable machine like the MakerBot Replicator 2 to streamline the product development process, while reducing time to market, improving product quality, and reducing costs.

3D Printing Industry: Talking of ‘Prosumer’, can you tell me how you define Prosumer at MakerBot?

Bre Pettis: The Replicator 2 is a “Prosumer” 3D printer. To me this means that it bridges the gap between professional engineers, designers and creative professionals as well as being accessible to anyone who loves to make things and feels comfortable with technology.

3D Printing Industry: What advantages does the new MakerWare software bring to the MakerBot offering?

Bre Pettis: This is one area where we have been working really hard. To most people it’s not as exciting as the printer itself, because it is not visible, but this is one of the most important elements in improving the whole 3D printing experience — it makes it flow so much smoother! MakerBot’s new slicing engine is up to 20 times faster, it’s smarter and it’s more efficient than the previously available technology. What that means is that you can print faster AND get more consistent models. On top of that, it also means that you can make multiple models at the same time – and still print faster. We’re really very proud of this and we’re always working to keep making it better! 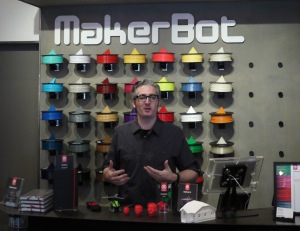 3D Printing Industry: What was behind the physical retail store strategy? It is not a particularly economically friendly thing to do these days, is it as much about evangelizing as it is sales?

Bre Pettis: I have dreamed of opening this store ever since we started MakerBot. Technology, and particularly 3D printers, have to be seen to be believed. The MakerBot Store is a utopia for creative explorers, and it’s full of MakerBot-made things that make perfect gifts.

We’ve not been open that long but I can honestly say that it has been an unbelievable success and totally exceeded our expectations. People are flying in from all over the country to see the new MakerBot Replicator 2 — and then buying them on the spot. Truly, seeing is believing!

3D Printing Industry: On a day-to-day basis, do you think you have to fight the hype surrounding 3D printing? How do you counter inflated expectations from people you meet that are new to the tech and believe 3D printers can print anything?

Bre Pettis: When people come to the MakerBot store and see the Replicator 2 in action, they are astounded; their mouths drop. They are blown away. This is not hype; this is true excitement. I would equate this to the beginning of the PC revolution when people first saw an Apple II+.

3D Printing Industry: What is your personal take on the “3D print a gun” stories doing the rounds?

Bre Pettis: I’m going to duck this one and refer you to the terms and conditions on MakerBot’s Thingiverse website:

Users agree not to use the Site to collect, upload, transmit, display, or distribute any User Content (i) that violates any third-party right, including any copyright, trademark, patent, trade secret, moral right, privacy right, right of publicity, or any other intellectual property or proprietary right; (ii) that is unlawful, harassing, abusive, tortuous, threatening, harmful, invasive of another’s privacy, vulgar, defamatory, false, intentionally misleading, trade libelous, pornographic, sexually explicit, obscene, patently offensive, promotes racism, bigotry, hatred, or physical harm of any kind against any group or individual, promotes illegal activities or contributes to the creation of weapons, illegal materials or is otherwise objectionable; (iii) that is harmful to minors in any way; or (iv) that is in violation of any law, regulation, or obligations or restrictions imposed by any third party.

Bre Pettis: Every morning it’s my favorite activity to look at Thingiverse.com and see what new things people have shared and what can be made on a MakerBot that I never thought of. We are just scratching the surface of what 3D printing can bring to the world. More than 25,000 things, and that number is growing every day, have been uploaded to the site and are available to share with others. I could go on about my favourites all day, but if you’re going to pin me down, I would have to say that some of the most impressive projects that get me really excited are in the medical field. A few that stand out for me are:

Jordan Miller, a researcher at the University of Pennsylvania in Philadelphia used MakerBot technology to make vascular human tissue. His paper was published in the journal Nature Materials

Seth Horowitz, Assistant Professor in the Department of Ecology at Brown University, uses a MakerBot desktop 3D printer to make models of a human inner ear.

Dr. Nicholas Giovinco, a foot and ankle surgeon in Atlanta, uses a MakerBot desktop 3D printer in his workflow for making anatomically correct models of his patient’s pre-operative foot and the post-operative foot to save time during surgery. His paper was published in The Journal of Foot & Ankle Surgery.

3D Printing Industry: What is your vision for the next 5 years for 3D printing and for MakerBot?

Bre Pettis: That is actually easy!! MakerBot’s Replicator 2 Desktop 3D Printers will change the world — in the home, schools, universities, research institutions and in corporations.

In Star Trek, Captains Kirk and Jean-Luc Picard would tell the Enterprise Replicator to make everything from tea to spare parts. We’re not sure about the tea, but we’re confident that in a few years, MakerBot 3D printers will be able to make spare parts virtually on demand. 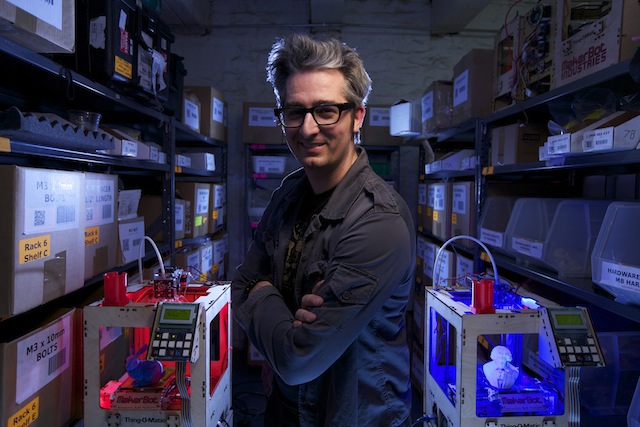