3D printers are becoming larger and larger. I was lucky enough to see the new Objet1000 3D printer the day it was announced and attend the press launch at Euromold — I called it a beast, which I later learned is also the nickname that some key Objet personnel have applied to it. It is indeed a large 3D printing machine, which of course is nothing new for OEMs when it comes to the factory floor. But for producing precision prototype parts using additive technology and multiple materials it IS new and it is very exciting. 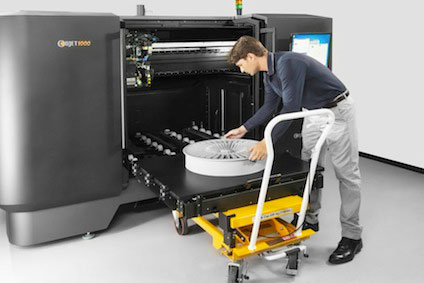 As mentioned in the overall review of Euromold this is a scaled up Connex platform and the 1000 refers to the length, in millimeters, of the X axis within the build chamber, with the Y axis offering 800 millimetres and the Z axis offering 500 millimetres. As the subsequent 3D printer to the Connex500 you might expect that this doubles up the capacity. Not so. The volume of the build chamber is actually 10x that of the Connex500 and it will build some very large, very precise parts in line with what Objet’s customers want and need. Big, complex parts that are reliable and precise — built in one piece, which eliminates the significant time and cost associated with clay modelling (the traditional 1:1 modelling technique) or fixing and gluing multiple 3D printed parts together to get a 1:1 scale model. Talking to a user he verified this, quoting an average sized 1:1 model for them in clay would take 2 people about 2 weeks and 1/3 ton of clay, with an overall cost in the region of £4,500. The same size model on the Objet1000 would take 3 days and cost about £1,500. He barely blinked at the capital cost of the equipment — £500k — because the ROI would be quick and justifiable.

One of the really interesting things about this 3D printing system is that whether you fill the build chamber with a single part or you require a part that fills a fraction of the chamber, depending on requirements, the quality of the parts will be the same. And as David Reis pointed out — there is no other 3D printing process that can scale up or scale down and maintain quality in the way that the inkjet process can. A company that only needs small parts will never invest in this system of course, however, those companies that consistently need big parts and sometimes small parts can, and most likely will. The first two Objet1000 3D printer machines are on order and due for delivery in Germany in Q1 2013. After the launch there will be more and they will roll off production during the second half of next year.

The other specifications for the Objet1000 are all recognizable for anyone familiar with the first and second generation of the Connex 3D printing platforms — layer thickness down to 16 microns; supports the full range of Objet materials (Vero, Tango and Digital), FullCure support materials; and Objet Studio software.

One other notable trait that came across was during the relaying of information about material loading. The cartridges — the Objet1000 accommodates six of them, which is typical for a Connex — but they were often referred to as canisters due to the increase in size, and they each hold 18kg of material. 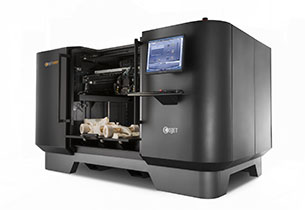 The Objet1000 3D printer is the latest result of Objet’s continued heavy investment into R&D with its proprietary inkjet 3D printing technology. During the press conference there was deliberate over-emphasis on this being fully focused on prototyping applications in the same way that it was stressed a couple of times that it is a step forward on a long journey, the implication being that there is still a lot more to come. Nothing was said directly — just the twinkly eyes and the hint of a nod — when I asked about manufacturing applications and CMYK colour down the line. Personally, I have no doubt that it is coming, but I can’t give you any idea when, they’re still being tight-lipped about that.

And finally there was also reference to the fact that Objet’s trajectory is closely aligned to the billions of dollars of investment that is currently being poured into 2D inkjet R&D. Objet holds a huge amount of IP on inkjet tech for anything that involves a 3rd dimension but has very close links with the 2D companies — I found this particularly fascinating.