Day 3 of Euromold 2013, as anticipated, had a slightly slower pace than the mania of the previous two, as it saw the 15th annual edition of the Wohlers Conference on 3D Printing and Manufacturing, organized jointly by Wohlers Associates and Demat, the company responsible for the whole Euromold event, who were celebrating their 20th anniversary.

This year the title and theme for the Wohlers conference was: “Business and Investment Opportunities in Additive Manufacturing  and 3D Printing.” As ever, Terry has his finger on the pulse of what’s hot around the industry and investment is a key issue. Indeed Terry revealed that Wohlers Associates has provided consultation services on 56 investment projects through the course of this year. 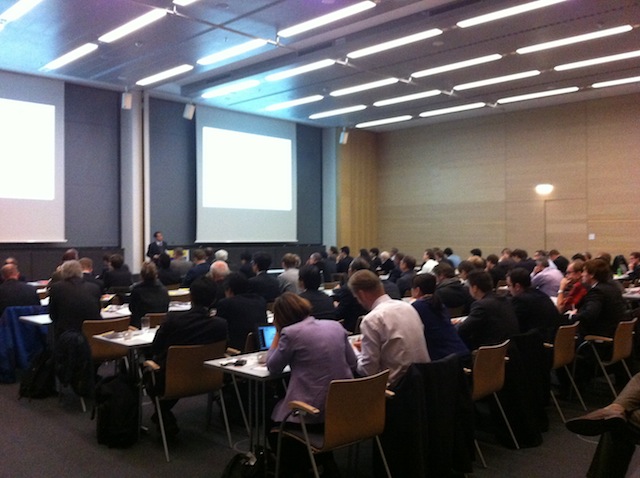 I’m jumping ahead of myself a little there, however. The conference got underway with a brief welcome and introduction from Dr Doring, Demat’s CEO, and subsequently the Keynote presentation was delivered by Olaf Diegel. Olaf’s presentation was called “AM: Tales from the Antipodes”, as he is currently based in New Zealand and as his international renown for working with and intelligently applying 3D printing is growing his workload is increasing. It transpires that Olaf is now working with Wohlers Associates and early next year he will be crossing continents and moving to Sweden. His presentation was both informative and wise with some interesting applications not all of which had reached European shores previously. An implanted jawbone for a very poorly dog, the Cortex 3D printed cast by Jake Evill (of course) and a component of a UAV that when made using traditional manufacturing methods, consisted of 32 parts — after design optimization for 3D printing this was reduced to two. There was also a nearly contentious part — a titanium rifle suppressor that contained some really complex internal geometry that meant when used it reduced decibel levels below that required for ear protection. That’s a big deal apparently. I say nearly contentious, because you mention “gun” in the 3D printing industry these days and there’s generally a sharp intake of breath, closely followed by a long heavy sigh. In this case, it’s being produced by a licensed manufacturing company, which is making them anyway, legitimately, but has now found a better and more efficient way of doing it. (That “gun” was barely mentioned this week actually! Which was nice.) Olaf also reported ‘good spending on AM in New Zealand this year.’ Including for the formation of Idea 2 Product Labs with a range of technologies. For the entry-level machines, anyone can come in off the street to learn and/or engage with the six printers and they are managed by Year 4 university students, with no limits put on materials usage. The mid-range machines also available have slightly tighter controls, but are just as available to anyone. This is a wonderful concept, and it is heavily used. A similar set up was also mentioned by Deon de Beer from South Africa later on.

When I caught up with Olaf later, things are going well indeed, and while he describes the move to Scandinavia as “an adventure” largely for his wife’s professional interests, in terms of everything he is doing it will be business as usual. He was deservedly pleased with the 3D printed drums and the keyboard and the reception they were getting on the show floor alongside his beloved guitars. His next piece for the growing 3D printed orchestra is a Saxophone, believe it or not!! Avi Reichental has challenged him to have it ready for CES in January for its debut!

Terry himself gave a global round up of AM – very similar to the one he gave in Singapore at Inside 3D Printing. Unsurprisingly though, given the current pace of change across the 3D printing landscape there were new slides. An interesting addition was news of the new machine coming from DMG Mori USA. A blown powder system that also incorporates a milling head. It is designed to bring greater efficiency with the capacity to build bigger parts, faster. Another project in development, is that being undertaken between the CSIR and Aerosud in South Africa. Again, Deon covered this in more detail in his presentation, which first gave a flavour of the growth and uptake of 3D printing in South Africa. This year has seen an almost vertical growth curve at the entry level (<$5k) of 3D printers, with steady growth for industrial uptake. Also, he provided news of retail and leasing options available in the region, which I will be looking at more closely. The mega-machine mentioned above looks incredible. It’s a powder bed system that is being developed with a capability of producing titanium parts up to 2 metres in the X axis. The Y and Z dimensions are 600 x 600 cm respectively. Not unexpectedly, huge R&D has gone into the lasers that will permit this.

Deon also shared his vision for the development park that is taking shape at the TTI over 272 acres focused on AM excellence. The idea, echoing Olaf’s presentation, is for it to be open to anyone. It will be a research centre, for tech transfer but also a technology demonstrator — where anyone can come in. The over all drive and Deon’s vision though is to reduce imports to South Africa and manufacture locally. One industry they are homing in on in this regard is the South African shoe industry.  Deon also highlighted a quite wonderful initiative involving South African kids and education. One of the first groups they had in to the Idea 2 Product lab had never even switched on a computer before they arrived, let alone used one. By day three of the programme they were designing in 3D. Wonderful.

China was also covered, by James Yu. There has been lots and lots of news about the big investments by the Chinese government into AM and 3D printing, all brought together by James. Also interesting to get some of the nitty-gritty figures actually. For example, he highlighted that there are 17 publicly listed companies in China directly involved with 3D printing. I haven’t counted recently, but I’m pretty sure that’s more than in the US. There are also 100+ more companies (not public) working in and around the 3D printing industry.

The afternoon session was kicked off by Fried van Craen, Materialise’s much esteemed leader. As ever his presentation was delivered in a powerfully understated way with such dignity and absolute command of his subject.

An early opener was: “I believe the success of Materialise in becoming one of the larger companies in 3D printing is by following ‘laws’.”

He went on to outline them:

• No successful technology/company can exist without real value creation

• Economic systems are hard to change and based on human nature

• The laws of physics do not change

An interesting point he made about the current state of affairs with 3D printing is that the increased awareness and uptake is a good thing, but, we need to be careful that we don’t start making tons of worse products than before (I think he was referring to an increase in plastic landfill, without actually saying it!). Rather, the real potential for this tech is to make better products. Essentially, this should always be our focus — as a global village.

He then went on to highlight a couple of projects that Materialise has been working on in this vein — robot hands and the Replace the Shoelace projects were enlightening — in terms of characteristics and potential economics. I will be looking to expand on these in future posts. Really interesting stuff. 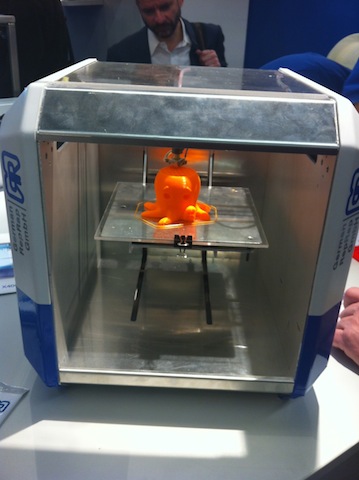 Unfortunately, I then had to leave the conference ahead of presentations by Andy Christensen of Medical Modelling, William Cass of Centor Colburn LLC, Sylvia Monsheimer and Tim Caffrey to make a final quick sweep of Hall 11 before leaving for the airport.

I finally caught up with Florian at German RepRap, as the stand had been inundated whenever I tried previously. I got to see the new NEO machine — a downsized, aesthetically pleasing 3D printer from the company. Also got to Ulf Linde of netfabb — another true gent — and he told me that the continuous upgrades they are coming out with are working well and being well received. I was also very interested to hear that the netfabb team were contributing to the developments with Microsoft 8.1 for 3D printing.

Raphael Gorge, Prodways’ President also caught me just after lunch. He has been unavailable when I was talking with Arnaud on Day 1 of Euromold and he was keen to chat. They have some other interesting things in development, including ceramics.

Must just tell you about lunch as I was privileged to spend some time with good friends: Kerry Stevenson, Vanessa Palsenberg, Nele Motmans and Bertier Luyt. Food was ok, but the chat and the laughs were marvelous. Perhaps the most notable take-away — apart from a 3D printed gnome made out of seaweed — was some of the high end French companies on Bertier’s client list as a 3D printer reseller in France. Have to stay tight lipped for a little while longer — buy, oh my!!!

I also shared a cab back to the airport with Lisa Henshaw of Fourth Day PR, which gave us a chance to catch up and compare notes on our 3D printing experiences.

I can’t believe how quickly it all went, but, Frankfurt, at the beginning of December, is definitely the place to be if you are involved with / interested in 3D printing. Exiting Frankfurt was a tad bumpy, to say the least, but happy to report I did make it home in one piece.