A bleary-eyed start to the day (at 2.45 am) soon turned around with the help of caffeine — in copious amounts — and I landed in Frankfurt on time and ready to pound Hall 11 of the city’s vast exhibition centre on the opening day of this year’s Euromold event.

Just on the off-chance that anyone is not familiar with Euromold, it is Europe’s largest annual manufacturing, mould-making and product development event. It is now also the biggest exhibition on the 3D printing calendar, with the whole of Hall 11 dedicated to 3D printing and associated 3D technologies. The big 3DP vendors really go to town at Euromold and traditionally save all their big new announcements for this show. For someone like me it’s a must-attend. I tried to do it in 18 hours last year. That didn’t go so well. This year I’m here for three full days of 3D printing news, launches, speculation and gossip!

Walking into the entrance of Hall 11 this year and vistitors were greeted by a host of entry level machines — across a spot that was taken up the the Cubify café last year. It was constantly busy here through the day, but I managed to make my first port of call to Leapfrog, and I got to see a Xeed up close (BIG) and meet Saswitha de Kok, which was nice. Also got to meet the guys from colorFabb and see some parts 3D printed with the new wooden material they released recently. Reporting huge growth and upscaling of production to meet demand, Sander Strijbos is a  full-on enthusiast and obviously loving every minute of the new venture.

Stopped by to see Colin Cater of ES Technology, who was on the Concept Laser stand. Some BIG parts there. Reports from the company are of steady growth and lots of industry interest. The growth was to be a reoccurring theme across the day — sometimes steady, sometimes ridiculously full-on, but it’s all about a growing industry.

Next stop was Andy Allshorn — Andy’s new company 3D-Parts Ltd was announced today, but when I got to his stand he had another surprise up his sleeve! Andy’s longevity in the industry and comprehensive understanding of the stereolithography process is, quite literally, second to none. He has now, with some serious backing, developed a Retrofit Service that can give a whole new life to older SL machines that have been rendered redundant. And then some! The retrofit service is currently only for SLA 250 machines but there are plans to change that. What the retrofit service does is turn an SLA 250 into a faster, more accurate 3D printer that is both easier to use and easier to maintain courtesy of a build processor and machine control software from Materialise. The retrofit also permits the use of any resin, with, get this, both high resolution and high speed modes, which can be applied simultaneously — in the same build. What that means is that you can build low-res models on one side of the chamber and high res models on the other — or anything inbetween. 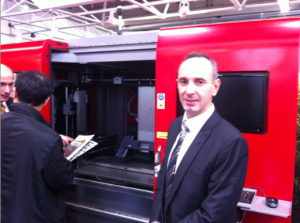 I met with Arnaud Guedou of Prodways — the company Mike introduced us to a couple of weeks back — and this company, in its new and old guise, has been operating under the radar. Intentionally, Arnaud told me. Until now. Now they’re ready to shout from the roof tops. And well they might. What they’ve got here is a big machine, with some original tech and some equally big claims.  I am convinced that this is original — a combination of DLP and UVA LEDs to produce large (or many), high resolution parts — at speed. To give you an idea, Arnaud told me that a single small part would take about 45 minutes to build on a ‘traditional’ DLP 3D printer. On the Prodways system, they can print 500 of the same part, in one go, in one hour!! The aim is naturally, industrial applications. They have had a lot of interest from the dental industry in particular. This is definitely one to take a look at / keep an eye on. They have started big but will down size, there are smaller platforms to be added to the portfolio I understand. 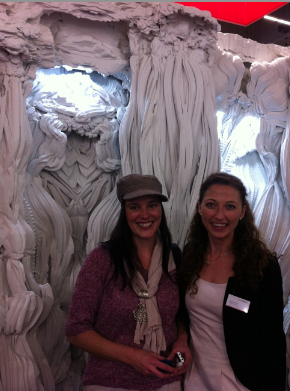 I met with Claudia from EOS who introduced me to the BIG additions to EOS’ metal and plastic machine portfolio, ahead of the press conference later in the afternoon.  Mike will fill in all the details on these very soon, he’s been briefed.

Similarly with the voxeljet launch, Mcor Update and Stratasys product announcement. All of which deserve more in-depth coverage than I can give here. Needless to say, lovely to catch up with all the relevant marketing people.

Stratasys’ press conference was largely about reporting on the last 12 months of consolidation. That I totally buy, actually; it is all coming together extremely well, growth of 20% in that same year, 2 Objet 1000’s installed in Europe under beta conditions, with 2 due to land in the US imminently and growth in terms of facilities and people. Commercial availability will follow. Big support of Makerbot — who, by the way, in contrast to a tiny stand at the back of the hall last year — were in a feature spot at the front on a massive stand. That support was showing clearly — and it was certainly much more than words. 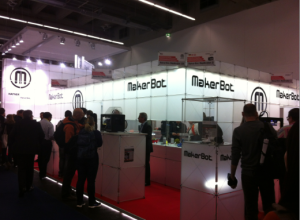 No reference to the Afinia thing (although plenty of non-Stratasys people talking about it). I got interview time with Scott Crump and David Reis, it went on for well over half an hour, details to follow. Yes, I did ask, and pushed, but there’s a definite party line and it’s being stuck to. I asked some other Stratasys peeps I nabbed too — same story. Plenty came out of the interview however, more details to follow and some will be used elsewhere.

Having missed the early 3D Systems press tour of all the new products on show (I was en route) I did manage to get Cathy Lewis on her own to probe a little further following the pre-announcement yesterday and the other new things. Regarding the language of the press release that I picked up on — the “pixels” and the “pantone-like” phrases, this was wholly intentional and designed to reach out to new markets that fully understand these terms in a traditional sense, working with pixels and pantone colours in a 2D way. The premise, and I can see this, actually, is that 3D printing is not a huge step up for these tech-minded people. And using 3D printing to improve their work processes is the aim but making them as comfortable with the concept as possible.

On the “swipe” I mentioned in yesterday’s post regarding the longevity in offering ink-jetting 3D processes, it wasn’t quite so clear. Cathy’s explanation is plausible, I grant you, she told me: “We originated multi-jet modelling, which we now call multi-jet printing years and years ago. Almost 18 years ago. And brought that to market in a variety of products. So that’s why we make that claim. Secondarily, when we acquired the Z Corporation, we acquired that group of technologies, which is a second type of jetting process. The third option within jetting is you can begin to jet multiple materials that you can mix together. So, we have been heavily invested in jetting for many, many years and we want to stake our claim so that people understand we’re not just SLA.”

Me: So it’s about identity?

Cathy: “Exactly, it’s about identity. It’s about branding. And it’s about a commitment to our markets.”

Personally, while I do buy into some of this rhetoric, and I can see why this approach is necessary for a multi 3D printing platform company, I suspect that it is also about a power struggle to be #1 in the industry. And I don’t think it will go away any time soon either!

3DS vs Stratasys has been a “thing” for 25 years plus, but it does seem like they’re going toe to toe even more these days!! I’ve had some thoughts brewing on this for a while now. Watch this space — post Euromold (and recovery)! I’ll just leave you with an analogy I came up with last week about these two being the new Apple and Samsung, because someone else threw it out there today too, quite unprompted, confirming that I’m not necessarily over-thinking this! You can argue between yourselves who’s Apple and who’s Samsung 😉

Other must-mentions today are Kerry Stevenson of Fabbaloo (such a pleasure to spend time in this man’s company, pondering and speculating the past, present and future of 3D printing). Also Bertier Luyt, who I caught briefly at the end of the day, saw the seaweed material spooled and printed. Will catch up in more detail tomorrow, but unsurprisingly, Le FabShop has had huge interest in this. I caught up with Junior Veloso of Kevvox. This machine developed and manufactured in Singapore, is doing extremely well — exceeding all his expectations. Key markets are proving to be the jewellery and dental market. But also toys. And the primary region to date? China! Surprised? Me neither.

China came up in lots of conversations today — it’s proving to be a key market for many of the vendors. Good job there are lots of 3D printing events over there next year then!

One of the best meetings I had today was with envisionTEC. I dropped by to say hi to long-time comrade in 3D printing Martin Forth and got to sit down with him and his CEO Al Siblani. I have vague recollections of meeting Al very briefly many years ago, when I was very new to the whole industry. Meeting him today was a wholly different affair. Such a passionate and knowledgeable man. His joy and enthusiasm, as he told me about the new Xede 3SP 3D printing process, was wonderful. I’m not entirely sure I’ve completely wrapped my head around the technical elements of the concept, despite Al’s patience in explaining it to me, but, in broad brushstrokes: “Xede” = exceeding customers’ expectations, while “3SP” is a triple S plus P, namely scan, spin & selectively photocure. What this means is that on the much larger build platform than envisionTEC has ever offered before, the process builds parts fast — the claim is it’s the fastest system on the market today — without losing ANY of the resolution for which the company is renowned. Al told me that printing at full capacity of the build chamber (that’s 18” x 18” x 20”), the Xede 3SP builds at 1 inch per hour. Reduce the size of the part within the platform and its exponentially faster again.

Another toe to toe match going on maybe — the established envisionTEC vs the newbie, Prodways?

The other major news from envsionTEC is that the company has developed a micro machine and it is now available on Amazon. Amazon approached them! It’s retailing at $10k and is primarily targeted at professional designers.

Anyway, my overall take-away from today was that size IS still an issue, but no where near as much as last year. This year it is much more about minimizing the traditional trade-offs that customers have always had to make between different 3D printing processes. Now many of the vendors are working on speed, accuracy and size — and offering little to no trade-off. That’s the messaging any way, the next 12 months will bear out the reality!

That was my day. And tomorrow is even busier, but thankfully travel-free.