For some time, we’ve been exposed to FFF machines that process filament to create their prints, but some companies and independent Makers are wise to the fact that filament may not be necessary at all. Leonard Dodd, for instance, is an experienced engineer who has developed his own line of 3D printers that cut out the filament middle man by processing granules of plastic directly. 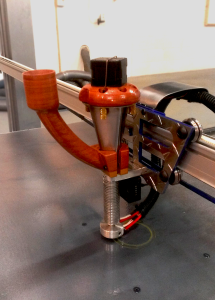 The ErectorBot, or EB1, resembles the familiar gantry 3D printers we’ve grown to love. Without the sleek exterior of the latest generation of desktop 3D printers, the EB1 comes in a range of sizes, from a “desktop” model measuring 3′ x 2′ x 2′ to an enormous 20’x7’x6′ model. The EB1 also uses pellets to produce prints, rather than filament, which can cut costs greatly. To do so, it operates with a Pellet Max or Pellet Micro Erectostruder, which is hooked up to a simple shop vacuum outfitted with a laser that senses the level of pellets in the Erectostruder hopper so that, when it runs low, the vac sends more material to the extruder.  To ensure maximum utility, however, Dodd says that the EB1 is capable of running standard filament, as well, with a simple change of the tip (The EB1 can use “the smallest of tip sizes all the way up to 2mm”). The inventor explains the reason for this, saying, “It was important for the extruder to be able to have the exact same abilities as the standard extruders out there. I would always recommend having both but for a different purpose. To mix unique materials such as the flex, or dissolvable etc. These are not currently sold in pellet form so need a way to maintain the use of them.” 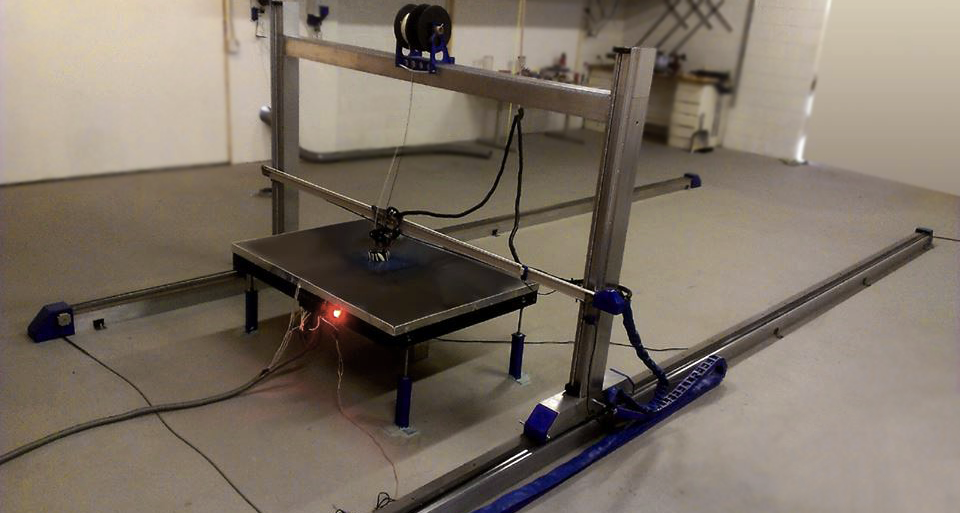 Uniquely, Dodd has also come up with a stationary heated print bed that is separate from the main body of the printer, so that it requires almost no calibration and can withstand a good deal of weight.  He points out that this modular print bed allows users to shift it out for a larger bed, when constructing larger objects and “to add additional axis and rot able turret construction.”  And because there’s no vibration with the stationary bed, it can be used for more viscous applications.  In describing how the printbed functions, he says that the EB1 doesn’t require a boxed enclosure to maintain its temperature: “The bed reaches 100 Celsius with ease, gypsum base, wire element grid, glass insulated. I’ve seen hotter temps but stable at 100. I’ve found that (heat drafting eliminates the need for ‘the box’ and other heating methods). I generally print ABS on 70-90 and get nice adhesion. The bed can actually get a lot hotter by bumping the Volts/ Amps around. I ran a large PLA piece the other day and didn’t even turn it on. 🙂 Or you can cook on it :)”

The machine was born out of a need for Dodd and his team to make full scale prototypes for industrial clients, Dodd tells me:

This setup was developed out of necessity over the years and began its infancy for the build of the Shelby Series One sports car. We needed a light weight styling bridge that we could use to not only develop the prototype model but to also double as a digitizer. All along wishing we could motorize the apparatus to do the refined model. Over the years we have added rollers and continued to abuse the “styling bridge”. At the beginning of this year I finished a very successful windmill project that I deployed the Arduino on with great accuracy. One month later I was contracted to design and build an electric car for a foreign government. IN 30 DAYS!

The gantry proved so powerful that he’s been using it since 1996 – when he and his team constructed the aforementioned Shelby Series One – until, he came across 3D printing and more recently added an extruder to his device. A nice story, but what it means for potential customers is that, if you purchase the ErectorBot in any one of its four sizes, you can also purchase different heads for a CNC plasma cutter, router, and welder.  In other words, the EB1 seems to be a versatile and capable machine.

ErectorBot’s website seems like it’s still being established, but Dodd says that the machines will be sold in the range of $11,500 to $35,000, saying, “The bots are geared toward smaller developers like myself to now have the ability to compete with the larger tier one studios within their industries.”  As the company is a start-up, his machines are made to order, until they can grow larger and keep up a larger inventory.  Dodd explains, “We have extrusions and electronics ready for a machine at all times as all are the same, but currently need to order, ball screws and rails at time of order placement, due to size / lengths and so on,” adding that there is a 4 to 6 week turn around time.  Interestingly, they keep a camera feed providing live footage of customers’ printers being assembled, “as if they were making it themselves. Very important part of the experience.”

In an email, Dodd tells me that he was, “originally born and raised in the Motorcity. The bots allow me to be more competitive against the larger corporations out there. Ultimately [I] will print a full scale supercar not too long from now.” Sounds ambitious, but Dodd also sounds like the type of guy capable of pulling it off.  And, if he does, he may be able to bring others with him because, if the ErectorBot Facebook page gets 10,000 likes, he says, “we will publish our Erectostruder .stl files and a step by step tutorial on how to build [it] open source; with credits to us of course. I feel this is the best way to express that we are supportive of the 3d printing community and this is our way of giving back.”