Encryption Through Destruction with Disarming Corruptor

Artist Matthew Plummer-Fernandez is interested in distorting the forms of 3D printed objects as a means of conveying the translation processes that occur in the digital and physical worlds. 3D scans distort the original objects and create something new. Intelligent, but far-from-perfect, search engines misinterpret the indiscrete, organic demands of human users. The artist’s latest piece utilizes his views on interpretation for a practical and political purpose. It is a piece of software called Disarming Corruptor , “a tool for making reversible damage to your STL mesh file” for the purpose of encryption. 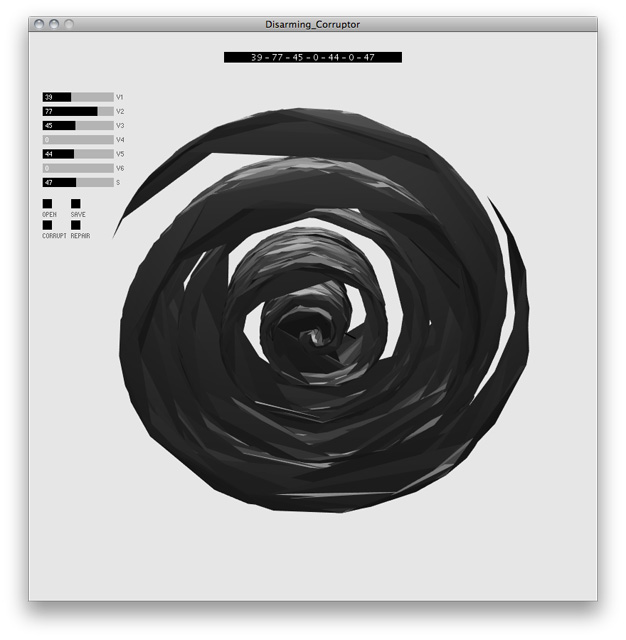 With Disarming Corruptor, you can tweak seven different sliders to disfigure your 3D model.  How you tweak them sets the basis for a 7-digit code, an encryption key. Then, you can upload your hot mess of an .stl file to sharing sites like Thingiverse, handing out the key to users of your choice. They download your file, enter the code, and the 3D model reverts back to its original design. The artist also offers some useful pro-tips for further mutilation and for early adoption of the program: “You can double-encrypt a file by corrupting twice with different parameters. To decode you would need to repair the file twice in the reverse order of the corruptions. Tag with ‘DC’ on Thingiverse so that DC early adopters can find each other.”

Why reversibly destroy your 3D objects? To avoid the feds and lawyers, Plummer-Fernandez says : 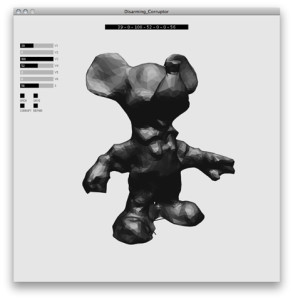 In a time of prolific online espionage, crackdowns on file-sharing and a growing concern for the 3D printing of illegal items and copyright protected artefacts, DC is a free software application that helps people to circumvent these issues…When patent trolls and law enforcement agencies find these files on sharing sites they will only see abstract contortions, but within the trusting community these files will still represent the objects they are looking for, purposely in need of repair. It could also be used to symbolically decommission files and throw away the keys, or to make something inoperative yet still recognisable so that other users would have to request a key to put it into use.

Modelled after the encryption device used by spies during WW2, Plummer-Fernandez’s software is a revolutionary tool for a disjointed and disoriented populace facing the unwieldy powers of governments and corporations. The artist pointed out to Deezeen that such a tool could protect people who practice harmless acts of copyright infringement, saying, “Think of all the Yoda Heads out there. These are exposed to all the patent and copyright trolls to dive in and pick out victims, and I’m sure the small print on these sharing services leaves their communities hanging out to dry when they come for them.”

DC, for the moment, can only be used to aid Mac users, but the artist is working to make it available to Windows and Linux users, as well. I tried to download and use the software myself, but my Mac told me, “‘Disarming_Corruptor’ is damaged and can’t be opened. You should move it to the Trash.” An attempt by Apple to thwart the ability to circumvent the status quo? Perhaps the corruption of the Corruptor is a further layer of artistic commentary by Plummer-Fernandez. Or maybe it’s all just a coincidence.

For a tutorial further explaining how DC works, watch below: