Artist Matthew Plummer-Fernandez has used Shapeways’ 3D printing technology and a “Hill Climbing” algorithm to birth the Venus of Google. The Roman goddess manifests from the foam of the sea in mythology, so of course the deity would find rebirth in the oceanic expanse of Google image search results. It started as a game of exquisite corpse in which a person receives an image from a friend via a Google image search, pastes the image for a new search, and finds a new image to add to the string. Plummer-Fernandez utilized image comparison between the two images of a wooden box and a woman in a body wrap. With a Long Tail Multiplier system based on the Hill Climbing Algorithm and a 3D Mesh render – distortion done with Processing and Hemesh Library – the image comparison is finally managed with a Python script calling a command-line tool called ImageMagick. The end result took physical form thanks to a Shapeways 3D printer and can be found among other works of 3D printed art on Plummer-Fernandez’s website. 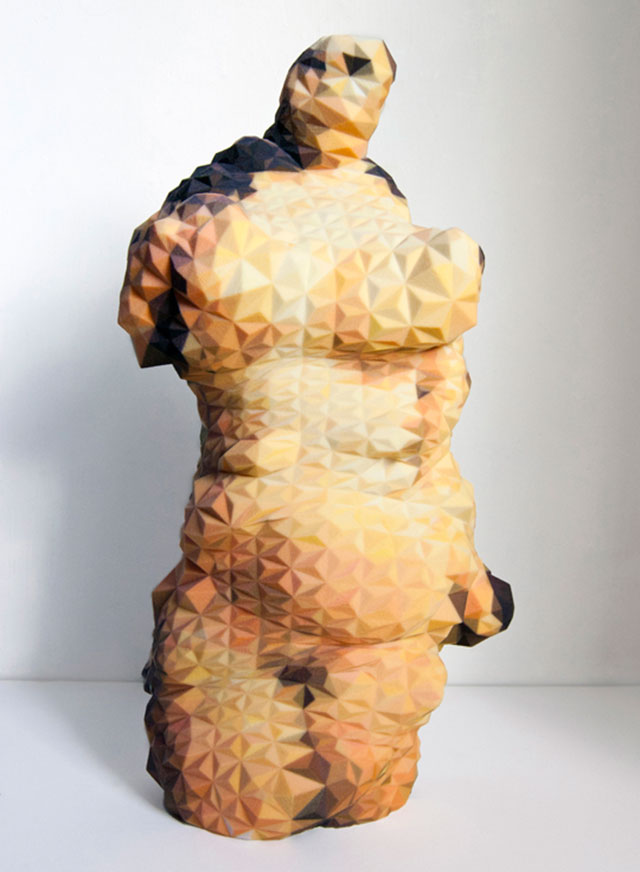 The work touches on a remarkable truth often unackowledged when caught up in a new technology, and that is how primitive, especially at this stage, the technology is while simultaneously embodying complicated and modern qualities. The pixilated form and amalgamation of two forms not only embodies the assimilated nature of the goddess, but also the very real crux in our present society between software and tactile reality. 3D printing is at the forefront, the bridge, between conceptual forms and a material embodiment appearing layer by layer and at a faster rate than ever before. The technology is very much in its nascent stage while making leaps and bounds in various fields no better reflected than in an artistic zeitgeist. The two images, a box and a woman in body wrap, provide an interesting pairing meant in the artist’s vision to represent a Venus, but the more apt qualifier is ”of Google” considering the process that developed the image.

Google has become a source of information and standard in many daily routines on par with a religious fervor for prayer.  Beyond the intent of Plummer-Fernandez and the paradox of primitive and advanced characteristics of technology is the physical manifestation of a deity representing a new theism. This is not an attack on religion or an attempt at blasphemy, but simply an observation of our awe and worship and source of comfort and knowledge. It makes sense for such a form to be born out of seraches, algorithms and 3D printing. A new pantheon emerges with the rosy fingers of a technological dawn, and one artist has given us a vision of a Venus for our day.