If You Can't Stop it, Trace it — Personalised Forensics and 3D Printing

Earlier this year, Cody Wilson’s Defence Distributed scared many of us with the potential menace of putting a gun “anywhere there’s a computer and an Internet connection”. The varied response – from advocating an outright ban of 3D printed guns to finding ways to detect firearm-like shapes prior to print – somehow missed the point: we can no longer stop the printing of guns. Instead, agencies should quickly focus their limited resources to make the new technology work for them argues Andre Wegner. 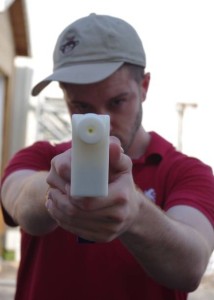 In a much vaunted tale, that gets a quick recap here by way of introduction, it is now widely known that within two days of the successful trial of a 3D printed gun, and subsequent release of the “Liberator” designs by Defence Distributed earlier this year, it had been downloaded more than 100,000 times. By the time the State Department had issued a take-down notice citing export control violations, the files had already permeated the web and were freely available on dozens of other sites, including Pirate Bay. The upshot — in terms of 3D printable gun designs, the cat is truly out of the bag, and unlikely to ever get (or be put) back in.

Given how relatively easy it is to build a 3D printer, simple access to 3D printable gun designs could indeed be worrying news. At their most basic level, 3D printers are but a few stepper motors and a heat coil. Not that it’s that simple in reality, but the real possibility that you could buy all the items needed to make a home 3D printer off the shelf is enough to immediately render impotent any attempt to stop the printing of guns. Banning machines or designs, or some form of Digital Rights Management software (always problematic as it hardly ever works) to catch a gun design before it’s printed are all doomed to failure.

3D printing is only going to become more accessible, making a world awash with homemade plastic guns a real possibility. How then are lawmakers to react? Calmly, says Michael Weinberg of Public Knowledge, a leading researcher on the topic: “there is no such thing as a 3D printing-specific solution to the problem of plastic guns… any attempt to address these concerns should focus on plastic guns, not 3D printers.”

And yet 3D printing-specific solutions may be able to help law enforcement organizations, not hinder them. By building on 3D printing’s core advantage – that is that complexity is free and each design printed can be unique – each gun printed could be slightly different from the next. This has already led researchers to introduce the possibility of traceable information embedded on the outside and on the inside of 3D printed objects. Translating this opportunity to the problem of 3D printed guns means: gun forensics could, in future, be personalised.

Personalised forensics means that those guns could not only be linked back to the designer, but the place at which they were fabricated. Theoretically, it also means that the bullets shot by such guns could be traced back to the same locations. Soon forensics teams would be able to link back bullets not only to the gun from which they were fired (for which they still need the gun) but also to the person who made the gun, who designed it, as well as additional information that could lead investigators to the identity of the shooter.

Armed with these opportunities, agencies would no longer have a reason to fear 3D printing. Each fresh 3D printing technology development, such as news of 3D printable electronics, would be warmly embraced, leading to new possibilities to track down guns, printers and designs that have been used illegally and the users thereof. Coupled with updated traditional forensics, such as identifying the chemical and mechanical properties represented in 3D printed guns, personalized forensics has the potential to safeguard us from 3D printed gun misuse in a way that driving the 3D printing of guns underground never would.

Andre Wegner is Founder and CEO of Authentise, a Silicon Valley based start-up building software to address intellectual property and associated 3D Printing challenges. The company recently filed a provisional patent related to forensics for 3D printed objects. Contact him under [email protected]