One of the main goals of a Fab Lab is to help people unleash their creativity and give them the means to bring an idea to reality. Ideas are often abundant but very often, they are not solid enough to become a prototype of something that can be truly marketable. However, among the many products seen at last Week’s Maker Faire in Rome, I discovered Dr Jack, which is an idea that leverages on all of today’s new technologies to become a prototype of something which could one day help to save your life.

Codeveloped by a team formed by Hardware Developer Alessandro Matera, Software Developer Alessandro Manno, Product Designer Carmen Russo, with the support of Fab Lab Catania, Dr Jack is a small device which easily connect’s to any smartphone’s headphone jack and, combined with an App soon to be released on all the main platforms, allows people access to their health information. 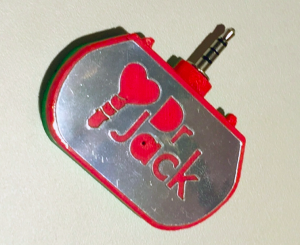 The concept is that the device is small enough that it can be worn as a pendant or carried around in a purse or pocket, and can be used in case of an accident or sickness, to allow a potential rescuer to rapidly access your critical data in case you are not able to speak.

The patent pending device is based on the idea of using a QR code as a life saving database. After developing the App and software environment to make it as easily accessible as possible, the team designed, developed and prototyped the Dr Jack hardware device and officially presented it at Rome’s Maker Faire.

Now, perhaps another difficult step begins, finding supporters and potential investors to mass produce and launch the device. Fortunately, in the age of rapid prototyping and distributed manufacturing, they already have a perfectly working product to show them.