The market for apps that make 3D modelling and scanning simple for ordinary computer users is exploding. This year has seen the launch of more than a handful of ambitious projects that make the conversion of 2D images into 3D models or the scanning of 3D objects simple so that anyone can begin 3D printing useful or detailed items. As there is obviously a need for such technology, there will also be a number of competitors rushing to fill that gap. Today, we take a look at two Indiegogo campaigns that hope to make 3D rendering an easy and simple process.

First, we’ve come across a project called Cirri. Named after cirrus cloud formations for the point clouds it generates, Cirri attempts to make 3D scanning easy through the use of 2D photo to 3D model conversion. Boasting a software that “provides the same professional quality results at price points that the rest of us can afford” and “with the proper setup achieve accuracy of less than one third the thickness of a human hair with sufficient resolution to capture the shape of the relief on a coin”, Cirri will walk users through a step-by-step process in which they take several pictures and stitch them together to make a 3D model with a highly detailed point cloud. The software isn’t finalized, hence the Indiegogo campaign, but, after telling Cirri what kind of camera you use (megapixels, etc.), the approximate distance of the object from the camera, and after picking some overlapping points between a couple of photographs, you can generate a 3D model. Based on the model created below, the results seem to be pretty phenomenal:

At the same time, the application looks a little complicated and intimidating. In other words, it may not be for folks who don’t have time to learn a new software. Our other 3D scanning project on Indiegogo, Dolly: the 3D Portable Scanner, goes in the other direction, offering, what looks to be, a simple and innovative approach to 3D scanning. Dolly, in kit form, is a box filled with a servo motor, a bluetooth adapter for wireless scanning, and an SD card with the .stl file to 3D print a scanning turntable. After printing your turntable, you have something not unlike the Makerbot Digitizer. Only, instead of utilizing some sort of laser, Dolly uses your smartphone’s camera. The video, which can be found on the Indiegogo page, depicts a pleasant experience with a limited number of steps that will have you scanning in no time. 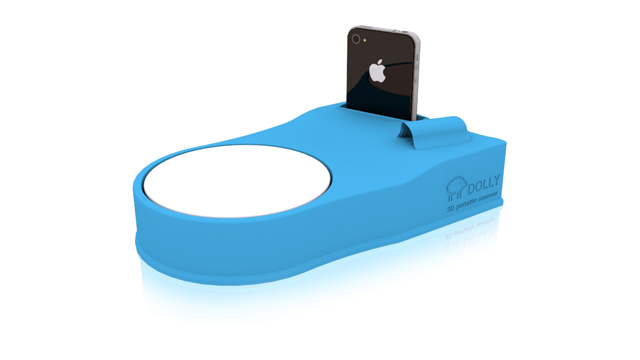 Obviously, because Cirri is not limited to the size of a turntable, you’ll be able to capture much larger objects with it; however, the price of the software will begin at around $349 for the Lite version, and the process of stitching together 2D pictures doesn’t seem all that easy. Especially when 123D Catch offers a free iPhone-based alternative with a relatively intuitive experience.  Dolly, on the other hand, starts at about $99 for students. More importantly, it relies on a nifty DIY gimmick and I’m all about gimmicks. Unlike Cirri, though, Dolly does not offer any examples of objects rendered through their app. It’s quite possible that, while the experience of creating dolly is as fun as a barrel of monkeys, its scanning quality is about as useful as a barrel of monkeys.

So, will either Cirri or Dolly cure our 3D scanning woes? Or are we left to wander the desert of the real in search for something that will truly transform our world into the 3D model we so desire? Stay tuned, friends. If there’s an answer out there, we will find it!