3D Prints Inspired by Bitcoin: The Convergence of Two Technologies

Just before Thanksgiving last week, Shapeways added an interesting post to their blog, briefly defining Bitcoin and showing three Bitcoin related objects that had been 3D printed. Though I’m still new to the financial technology of a digital, decentralized monetary system, I recognized that the Bitcoin inspired 3D prints posted by Shapeways, in some ways, represent a variety of reactions people may have to the cryptocurrency. So, what I thought I’d do, is to explore each object and couple it with some opinions gathered online to give a sort of overview of where the currency stands and how it might connect to 3D printing.

Before I get started, some folks might be unclear on what Bitcoins are exactly. This video does a pretty good job of outlining the currency:

But here’s another definition from The Economist that I’ve found useful:

It is a peer-to-peer currency with no central bank, based on digital tokens with no intrinsic value. Rather than relying on confidence in a central authority, it depends instead on a distributed system of trust, based on a transaction ledger, which is cryptographically verified and jointly maintained by the currency’s users.

Digital dollars with no bank, tied to a network of computers solving math problems.There’s way more to it than that, I gather, but I’m not sure we have the time to go into further detail here.  So you might want to watch a few videos and read the Wikipedia page. I learn best through hands-on experience, so I’m going to be getting a Bitcoin wallet myself. Let’s move onto the 3D printed objects. 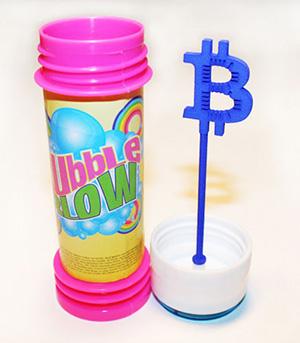 The first object posted by Shapeways is a 3D printed bubble wand. Stick the plastic Bitcoin emblem into a soap canister and blow B-shaped bubbles. The symbolism of this shouldn’t be glossed over. The digital currency is like any currency when it comes to speculation. As whole marketplaces wager on the value of the dollar or the Euro, Bitcoin has attracted a huge number of speculators, including the Winklevoss twins made famous in The Social Network. And, with all investment, there are bubbles. This past week, Bitcoin passed the $1,000 dollar mark, when it began at around $15 this year. In fact, the value of Bitcoin is notoriously volatile, leading many to think that its value is at the cusp of a bubble. Patrick L. Young had this to say at RT:

Like it or loathe it, bitcoin is an entity of extremes. Not merely its value oscillations but also the vehemence with which its acolytes support it and indeed its detractors seek to destroy it. BTC supporters are ecstatic with a vertical leap from barely 215 bucks to over 1000 dollars during November alone. Prices never move in a pure straight line; rather they tend to ebb and flow like tides and emerging currencies are often very volatile. Indeed, bitcoin has been more volatile than most during its 4-year existence. Moreover markets can remain irrationally priced longer than contrary investors can remain solvent.

Readers vested with a dose of realism will recall great historical bubbles like Tulipmania, where Holland became obsessed with flower bulbs imported from Turkey. Vast inflation in blooms sadly led to bust.

Therefore the massively balkanized world of bitcoin opinion will likely remain charged. In fact, bitcoin may yet have another collapse at which stage obituaries will be written once again (as they were in 2013, 2011, 2010 and…Well, BTC was only born in 2009).

The currency, in this way, is like 3D printing, with multiple haters predicting the eventual fall of additive manufacturing and the bursting of the 3D printing investment bubble. 3D printing stocks have been said to be extremely over-valued and the technology itself has been argued to be impractical and imperfect. 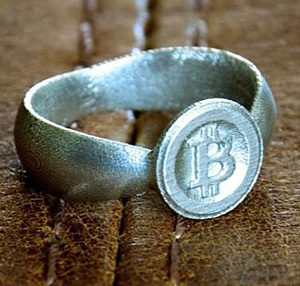 The next printed object listed on Shapeways was a simple ring with the Bitcoin sign embedded into it. The ring, to me, resembles the superhero decoder rings of the 20th Century, buried in boxes of cereal. This links to the heroic feats Bitcoin is promised to perform. Due to its decentralized nature, advocates argue that its freedom from regulation will be a democratizing force. The mind behind Defense Distributed’s 3D printed Liberator handgun has begun a new project to attempt to make Bitcoin anonymous, with the project’s Indiegogo page saying this:

Bitcoin is the next battle ground in the fight against supranational political domination. Nation states harrass their governed populations with parades of open lies, and dedicate their time to the modern statist paradigm: developing emergency powers and containing the growth of new technologies. Digital anonymity and freedom of financial speech are some of the last tools left in the dwindling garrisons of Liberty.

Wilson himself has argued for the utopian power of 3D printing, though his vision of a utopia may differ from others’.  3D printing, like Bitcoin, has been thought by some to give people power over the means of production by making it possible to manufacture items in their own home, rather than remain dependent on large conglomerates for their everyday goods. At the same time, a deregulated and anonymous currency (though Bitcoin is not completely anonymous) allows some to avoid paying taxes, according to Richard Stallman, originator of the Open Source Movement:

One good thing about Bitcoin is, you can send money to someone without getting the permission of a payment company. So, for instance, if you want to support WikiLeaks – which is very good thing, and which the US government doesn’t want to let people support  – and has used extrajudicial means to chase off the Internet partially – well, with Bitcoin you can do it.

On the other hand, there is a potential problem with Bitcoin, which is, it might get used for tax evasion. I’m not in favour of tax evasion, but we have to realize that the biggest and most harmful cases of tax evasion are lawful. Governments don’t dare make businesses pay the sort of taxes that they ought to and they wouldn’t dare make rich people pay the taxes that they ought to. And thus, if we really want to put an end to tax dodging, we really need to change the tax laws so that businesses can’t offshore their profits. Now, we’re speaking from London, and as we know, there were big protests against the off-shoring of profits that the UK government doesn’t have the courage to stop.

As is the case with 3D printing, the technology is a tool and, as such, can be used for potentially positive or negative purposes. 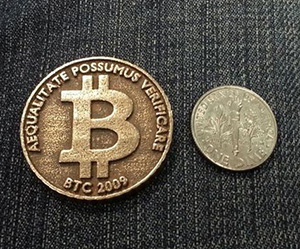 Finally, on the blog, there is a 3D printed Bitcoin, transforming the digital currency into something physical. The coin, which is imprinted with your Bitcoin Wallet address, demonstrates the currency’s possible practical use, somewhere in between the dreams of speculators or idealists and the real world.  There may be some advantages to a decentralized system, so that Bitcoin may have real world value. For instance, commenters on the Shapeways post explain that it can be used by people without access to USD payment options, saying:

Please accept bitcoin. 3D printing and bitcoin is the perfect combination. Both are innovative and disruptive. Both are major players in the new industrial revolution. And if you don’t want to be visionary: 6 billion people don’t have access to normal banking systems and visa cards. It it not improbable that amongst those 6 billion is the Albert Einstein of mechanical engineering, sculpting or art. You can be sure this person has internet and will be able to print his or her visions with you using bitcoin.

In Iran citizens have been able to use the cryptocurrency to circumnavigate US sanctions that previously prohibited access to US dollars. This, to me, signifies the fact that some form of cryptocurrency may have a very important use so that, despite the flaws found in Bitcoin, such as the ability for hackers to steal from Bitcoin Wallets or the money’s volatility, there is some very practical value to having a form of monetary exchange that is not tied to the corrupted hands of government officials.  In the same way, 3D printing will probably not usher in a new era of economic equality, but it has already started to have a practical impact on the world, with streamlined jet engine nozzles and additively manufactured implants hinting at a happier future for the human race.

The 3D printed coin also represents chance. Heads or tails will determine if either technology will change our world for the better or worse, depending on how you bet.