Even though recent news regarding 3D printing has, for the most part, been about empowering the almighty consumer and unleashing the design forces within, this does not mean that the people on the other side of the increasingly ambiguous and fuzzy consumer-provider front are not studying the potential applications of this technology within their offerings as well.

The latest evidence of precisely this comes from the entertainment behemoth Disney, which has published a paper on its research division site entitled Printed Optics: 3D Printing of Embedded Optical Elements for Interactive Devices. The team behind the project explains that the results presented in the paper, though impressive, are merely a phase towards a future of taking advantage of the potential of 3D printing. “Printed Optics is part of our long term vision for interactive devices that are 3D printed in their entirety. We envision a future world where interactive devices can be printed rather than assembled; a world where a device with active components is created as a single object, rather than a case enclosing circuit boards and individually assembled parts.” These statements give us some idea of where the people behind the 2D Mickey Mouse are heading moving forward.

So what have they done so far? Well, take a look at this video for a visual abstract of the research results.

As shown in the clip, Disney has developed several different kinds of displays that react to voice, position or light as well as unique pressure and motion sensoring technology to create a unique interactive experience for the user. The outcome of all this ‘tech-travaganza’ is certainly impressive, and original isn’t really something that has never seen the daylight before. However, the advantages in the long run and from a wider perspective look substantial. 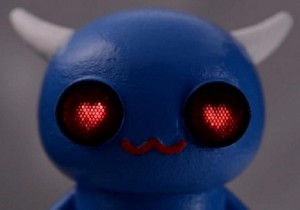 The favourable difference between producing interactive toys and other consumer goods with 3D printing compared with more traditional methods of manufacture is clearly the ability to do so without having to construct and assemble the components from separate units. And this of course translates directly to cost savings, as the objects can be created shelf-ready in a single build, following the ever more shorter testing periods of prototype iterations before the actual launch.

Another interesting angle is the introduction of optics, such as lenses, into the equation.

As Disney is highly unlikely to turn their full attention to competing with the Leikas and Nikons of the photographing world, suggests the kind of products and innovative product features that might be included in their already vast consumer market offering in the future. However, the company has not yet announced any specific plans for their future road map regarding the usage of 3D printing, but we will be sure to keep an close eye on the developments — as we are certain many other toy manufacturers will also. It seems that even off the chess board, the king, while moving slowly, is hard to overtake shy of any surprising tactical moves.