While Canon has been distributing 3D Systems 3D printers in Europe for almost two years now, and its cameras are often used for high-resolution 3D portrait booths, today, at the Canon EXPO in Paris, the photo and printing giant unveiled its first 3D printer concept, meant to be faster and produce stronger prints than current technologies.

Canon mostly teased the public with the video below, which states that their new resin-based lamination process is “not only suitable for [rapid prototyping] but [rapid manufacturing] as well.”  The company put out a number of vague marketing statements doing little but indicating their move into the 3D printing space, like, “With the highest level of precision in the industry we’ve reduced the need for time-consuming post-processing. Plus, higher modelling speeds and faster setting times mean you’ll spend more time innovating and less time waiting.”

In addition to claiming reduced post-processing times, Canon suggests, in the video, that a wide variety of materials will be made available, like ABS and PE. The system is also meant to connect wirelessly and bridge with 3D scanners and other 3D printers on the network. In a separate press release, the company declares the emergence of a new “Imaging of Things”, saying, “In the future nearly everything will be connected through smart devices. These rely on built-in cameras or sensors and the data they generate. As a result, Canon predicts that the Internet of Things will largely depend on the ‘Imaging of Things.'”

To help establish dominance in this new area, the company has partnered with other companies to form a larger network with regional headquarters across Europe, Africa, and the Middle East.  Europe will focus on network video surveillance (NVS) and printing, bringing on Axis and Milestone Systems to “respond to society’s ever-expanding monitoring needs” with “the concept high-sensitivity network camera with ultra-telephoto lens.” In addition to 3D printing, through 3D Systems, the company has partnered with Océ for 2D color printing, and other companies for B2B services and digital consumer services.  Canon subsidiary Océ, it is worth remembering, also partnered with DEMCON to produce a specialty metal 3D printing system.

Now the largest printing and network surveillance system company in the world, Canon seems to be primed to shape the future of technology, as well.  Perhaps pushed by the blended reality ecosystem being developed by HP, which sees 3D scanning and 3D printing seamlessly connected to translate physical and digital objects across media, Canon has not only unveiled their resin 3D printer, to rival HP’s Multi Jet Fusion technology, but they have developed their Mixed Reality (MREAL) headset, rivaling HP Sprout. Canon describes its MREAL headset by saying, 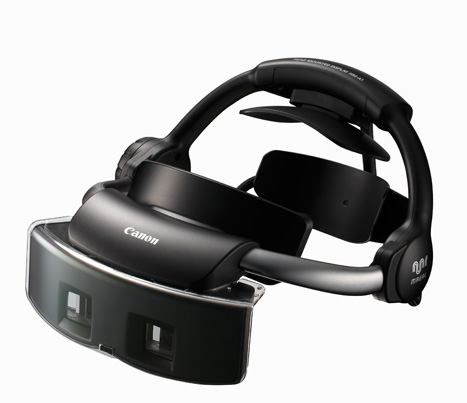 By wearing a headset, you’ll be able to design and create prototypes at actual size and assess them in 360°. MREAL will allow you to share and review these before the actual manufacturing starts, for more efficient, effective and quicker problem solving during the Product Lifecycle. Giving you the ability to look inside an object and interactively check its inner workings, the system is ideal for manufacturing and training.

Both companies, along with Microsoft and Autodesk, seem to have a firm grasp of the future direction that computing and manufacturing technologies are taking. Now, we’ll wait for the larger ecosystem of 3D scanners, 3D printers, haptic devices, and AR/VR headsets to take shape, at which point an all-encompassing phrase will be used to describe them.