BitDrones Show Glimpses of 3D Modeling in a Future Far, Far Away

If 3D printers are the ancestor of Star Trek’s replicator, what is the ancestor of the infinitely amusing holodeck? Some feel it is liquid-metal based 3D fabrication, others see it as self assembling/shape retaining models. According to Roel Vertegaal, from Queens University’s Human Media Lab, programmable matter is based on self-levitating displays, allowing physical interactions with mid-air virtual objects.

What this results in is an interactive swarm of flying 3D pixels (or, actually, voxels, since we are talking about matter). Each voxel is represented by a 3D printed, connected miniature drone. This system, called BitDrones, allows users to explore virtual 3D information by physically interacting with self-levitating building blocks.

The BitDrones system was unveiled on today at the ACM Symposium on User Interface Software and Technology in Charlotte, North Carolina. It was also already featured in a Motherboard article which is somewhat peculiar, since VICE’s technology sibling had recently announced the “death” of consumer 3D printing, but appears quite eager to believe in technologies that are just a few more decades down the road. 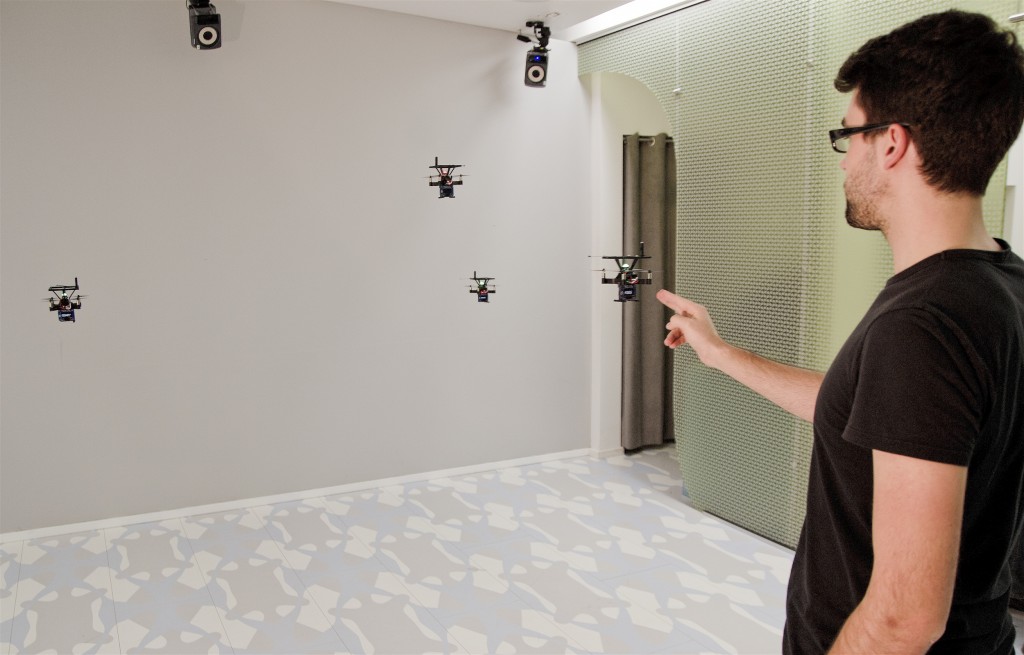 “BitDrones brings flying programmable matter, such as that featured in the futuristic Disney movie Big Hero 6, closer to reality,” says Dr. Vertegaal. “It is a first step towards allowing people to interact with virtual 3D objects as real physical objects.”

At this very earl stage, the system works through three types of BitDrones, each representing self-levitating displays of distinct resolutions. These include “PixelDrones” which are equipped with one LED and a small dot matrix display, and “DisplayDrones”, which are fitted with a curved flexible high resolution touchscreen, a forward-facing video camera and Android smartphone board. The actual building blocks for complex 3D models are called “ShapeDrones”, which are augmented with a light-weight mesh and a 3D printed geometric frame. 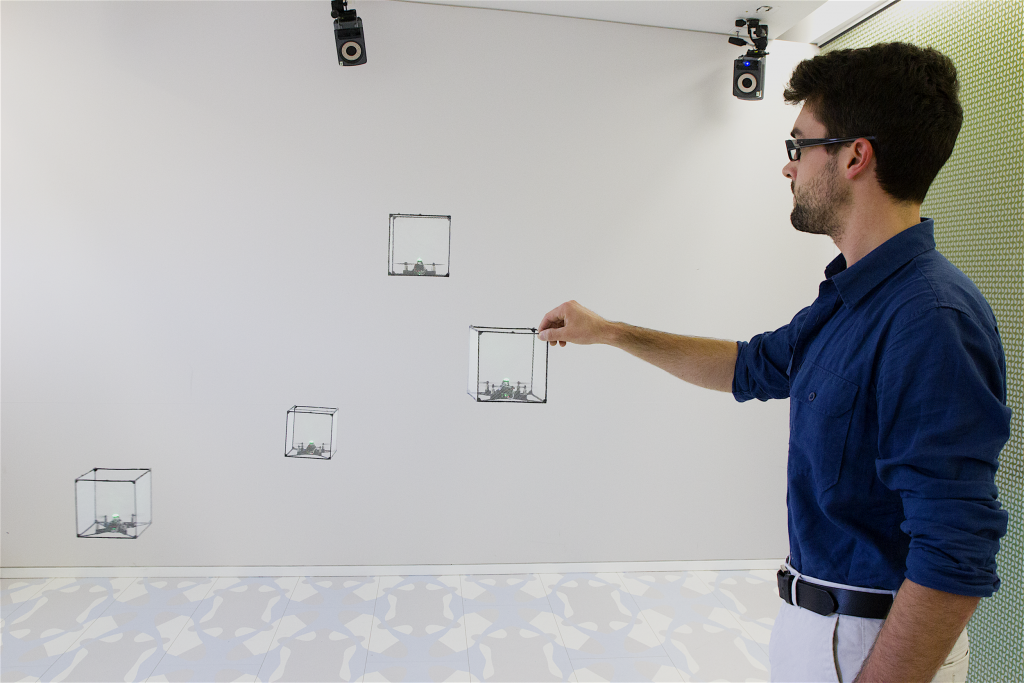 All three BitDrone types are individually tracked and positioned in real time via motion capture technology. The system also tracks the user’s hand motion and touch, allowing users to manipulate the BitDrone voxels in space. “We call this a Real Reality interface rather than a Virtual Reality interface. This is what distinguishes it from technologies such as Microsoft HoloLens and the Oculus Rift: you can actually touch these pixels, and see them without a headset,” says Dr. Vertegaal.

Although future evolutions are fascinating to say the least, the current range of applications for this technology is limited. Users could use the BitDrones to physically explore a file folder by touching it. When the folder opens, its contents are shown by other PixelDrones flying below it. Files in this wheel are browsed by physically swiping drones to the left or right.

Users are also able to manipulate ShapeDrones to serve as building blocks for a real-time 3D model. One more possible short terms use is telepresence, where the Bitdrone enable remote users to move around locally through a DisplayDrone with Skype. The DisplayDrone automatically tracks and replicates all of the remote user’s head movements.

While their system currently only supports a dozen comparatively large 2.5” – 5” sized drones, the team at the Human Media Lab are working to scale their system to support thousands of smaller size drones (as small as half an inch in size). These would be able to replicate the shape of increasingly complex objects. By the year 2400, they might even be as small as an atom and we would have ourselves a working Holodeck. 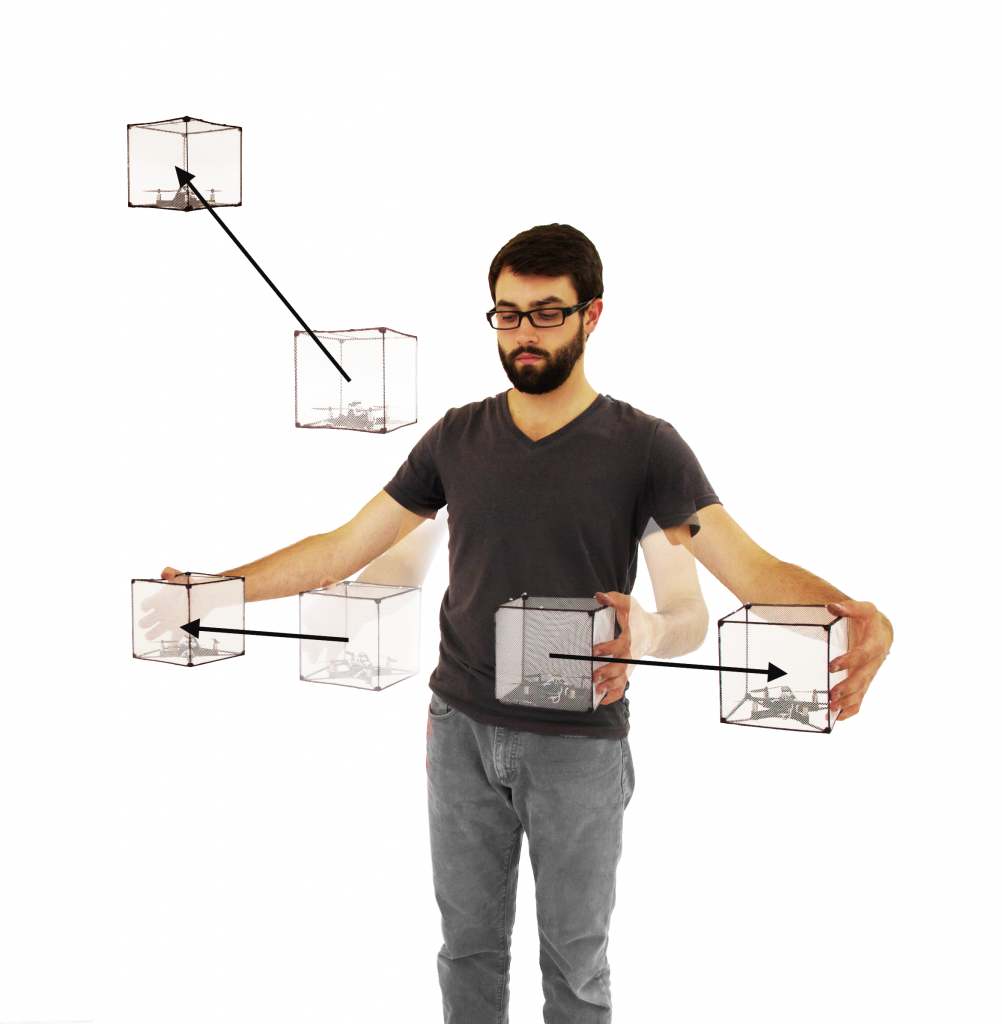