Vancouver’s Aspect Biosystems has created a 3D printer that will bioprint human tissue capable of developing full biological functions. The bioprinted tissue can be used to test dangerous or experimental drugs, and could eventually lead to completely viable and transplantable bioprinted organs.

The Canadian start-up was founded by a group of researchers from the University of British Columbia after receiving seed funding from the schools entrepreneurial mentorship organisation [email protected]. Their bioprinting technology places living cellular material in a liquid hydrogel, which is fed into their 3D printer and extruded into a specific shape layer by layer. The living biological structure will then be placed in an incubator and cultured, where the living cells start doing their jobs and create living tissue that develops biological functions.

The need for alternative drug testing methods are becoming increasingly urgent beyond the desire to eliminate the need to harm the animals. There are many diseases and conditions that animal testing will produce inconsistent or false positive reactions and find themselves unable to simulate in the human trial. Being able to bioprint humanlike tissue for drug testing purposes would remove the inherent unreliability of animal testing, and save money on drug development.

Testing drugs on bioprinted human tissue would drastically reduce – if not entirely eliminate – the need for animal testing. Valuable research time and money would no longer need to be wasted on extended trials that may be effective in animal models but will be found to not work in human models. Additionally it could find treatments that work on human physiology that would have never made it past the initial animal test phase due to poor results. But Aspect Biosystems has bigger plans for their technology than just drug testing. 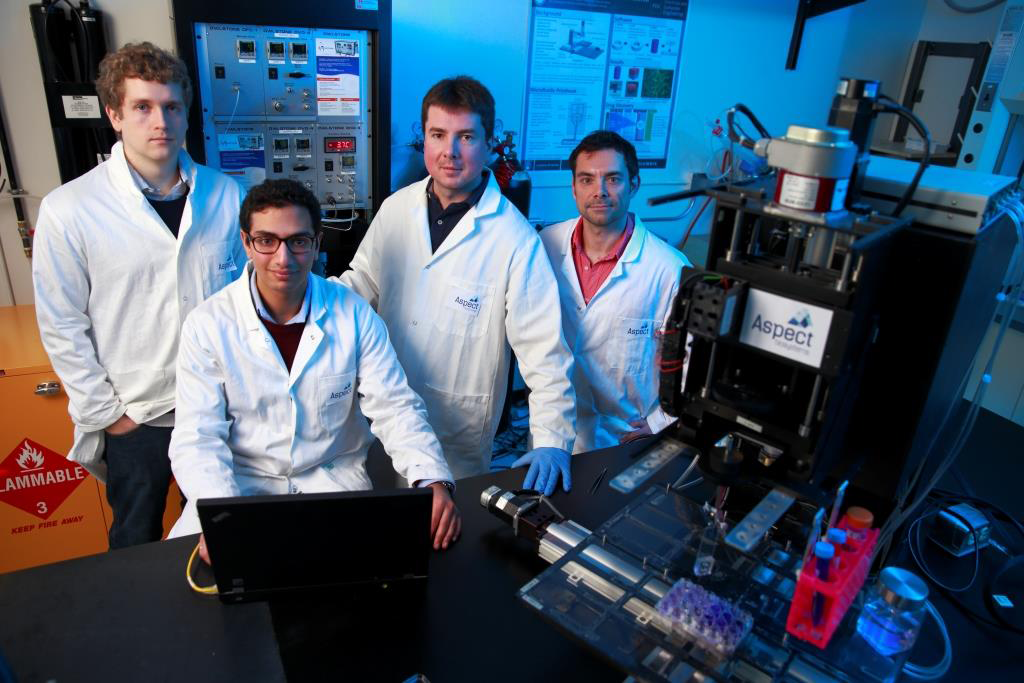 “Our business strategy is to work up from the lower-hanging fruit and definitely the drug development market is the best and most strategic opportunity for us in the short term. Going forward, the opportunity in personalized medicine will be a big one and going even further than that, we open up the doors to making implantable structures — these could be parts of organs rather than full organs,” Aspect co-found Konrad Walus recently told The Vancouver Sun. “In the future if everything worked out splendidly, one could imagine making replacement organs.”

The technique can also be used with a specific individual’s cellular material to create 3D printed biomatter that is a genetic match to a specific patient. This would allow drugs to be screened for side-effects, or test various available treatments in order to find one that works best with a specific human patients body and causes the least amount of harm. For instance, with diseases where the treatments are often just as deadly as the condition it’s treating, a patient with cancer could have their tumor replicated. This allows doctors and researchers to find the treatment that has the least amount of risky side-effects for that individual. 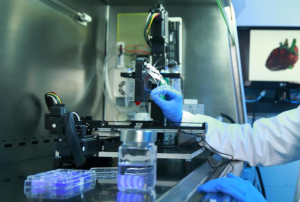 This is only the beginning of what bioprinting is going to start doing for the medical industry. As soon as the process is refined the limits are almost non-existent. It starts with 3D printed material for testing, then comes the bioprinted organs, and then we get into the customized organs. Were you born with a weak or inefficient heart? Get a new 3D printed model that eliminates the weakness. And while you’re at it, have them bioprint you new a new nose rather than try and reshape the one that you were born with. Is pollution starting to cause respiratory problems in the general population? Bioprint new lungs for people that can’t filter out the toxic material.

All of that may sound like science fiction, but twenty years ago 3D printing rocket engines out of titanium would have sounded like science fiction too, but we just shot a rocket into space with one. This is the future that 3D bioprinting will be taking us to, this is the future of medical science. It’s coming, and based on the advancements that have been made in only a handful of years, it’s coming far quicker than most of us ever expected.