3D printing is becoming increasingly implemented in the operating room, with surgeons turning to the technology to create tailor-made implants for their patients.  This time, surgeons at Southampton General Hospital have 3D printed a hip joint for 71-year-old Meryl Richards and have used her own stem cells to hold it in place.

The patient had had six hip replacements in the past, making her pelvis brittle enough that her leg had bored a hole through the bone.  This has left Richards with one leg two inches shorted than the other, debilitating pain, and the inability to walk without crutches.  In fact, if doctors didn’t perform this surgery, she would ultimately be confined to a wheelchair.  Richards told the UK’s Sky News, before the surgery, “For years now I’ve walked with crutches or stick. Hopefully this will give me movement and mobility again. It’s absolutely fantastic.” 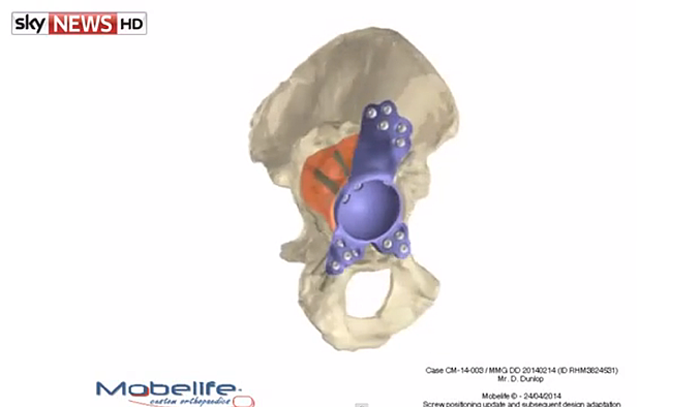 Southampton doctors have stepped in, creating precise CT scans of the patient’s pelvis from which they could 3D print a replacement hip joint.  The team sent the CT scans to the Belgium-based Mobelife, the daughter company of Materialise.  The implant design and production firm was able to model and 3D print a custom socket for the new hip joint from titanium powder.  The lead surgeon, Dr. Douglas Dunlop, said that, “The benefits to the patient through this pioneering procedure are numerous. The titanium used to make the hip is more durable and has been printed to match the patient’s exact measurements – this should improve the fit.”  And because the implant is made to fit the patient’s body exactly, Dunlop believes that there would be less of a chance for infection. Not only that, but the technology was able to help the team cut down on procedure time dramatically. 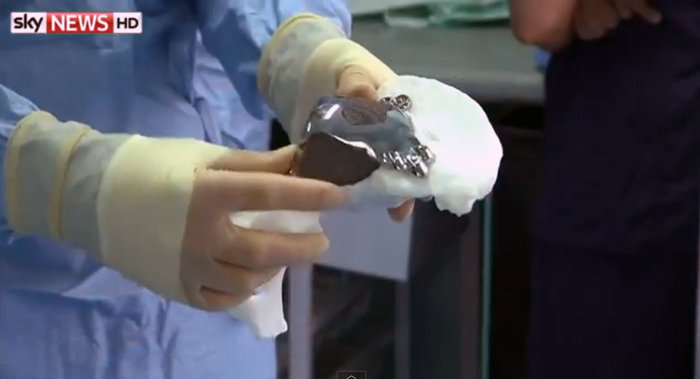 In fact, the implant was so specific to Richards that the scientists used stem cells from her own bone marrow to hold the implant in place. The cells will grow new bone around the implant, which Professor Richard Oreffo says “will allow the structure to be much stronger and for Meryl we hope it will be the last time she comes back to the operating room.”

This patient’s implant, including the CAD modeling and printing, had a price tag of about £12,000 (about $20,100).  As the technology becomes more affordable and is used in more such surgeries, proving its overall viability in implant medicine, we could see tailor-made 3D printed implants become standard procedure.  Richards certainly thinks so, saying before her surgery, “This 3D printing is just taking off, isn’t it? Absolutely wonderful, yes. So we’ll all be able to come in and have knee replacements fit specially for us. And just take out an old part and put a new part back in again.”  I, for one, look forward to the day when we will be treated like old, broken automobiles.  Watch the Sky News coverage of the story below: