Designers Ami Drach and Dov Ganchrow created several stone age flint stone axes, scanned and then 3D printed a variety of handles for them. The project is called Man Made, and yes, it is completely unnecessary. But I’m pretty sure that’s the point. 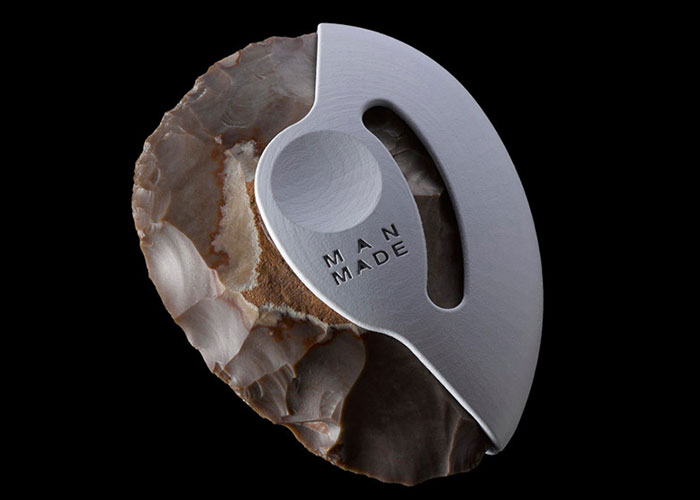 For three and a half million years our modern world was built using only crude stone axes and blades. The Stone Age is the period of prehistory beginning when humanity’s ancestors first learned to create and use crude stone tools and ending with the advent of simple metalworking. Many stone materials were used, but perhaps the most common was flintstone as it was extremely hard, but when struck at certain angles it could be split off into thin sharp pieces called flakes or blades. This process is called knapping, and the flakes can then be refined by craftsmen called flintknappers using more precise tooling. This refinement can turn them into simple axes, spear and arrow heads, knives or specialized tools for skinning and cleaning food. 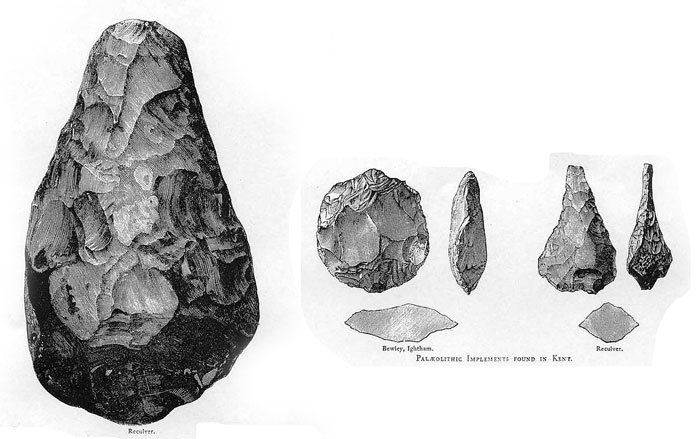 The type of tool created by Drach and Ganchrow is called an acheulean stone tool, and was first used by Homo erectus almost two million years ago. Considering that the Stone Age only ended about seven thousand years ago, that means that for the vast majority of human history these types of stone tools were the dominant form of technology. While there are some smaller societies that still use acheulean tools today, they are rare and extremely isolated from the rest of the world.

“The first stage of the project was one of hastened evolution and bleeding. Flint rocks of desirable size, shape and material quality were sourced from the Negev desert in southern Israel, while time was spent improving and understanding the skill of knapping – striking the flint with a softer stone to create controlled breakages, and chipping away flint flakes as the impact’s shock wave runs through the stone.” explained Ganchrow “Needless to say this is where the bleeding came in…” 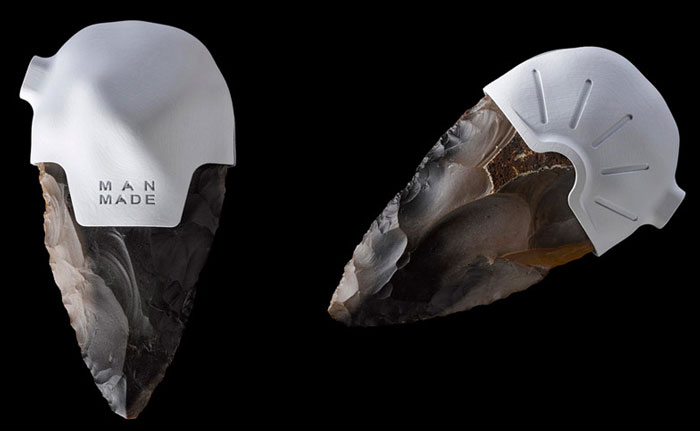 Drach and Ganchrow crafted their acheulean tools using real flintstone with traditional knapping techniques. The tools were then 3D scanned and various handles were designed and 3D printed to fit the stones perfectly. A Stratasys Objet 3D was used to produce the handles in VeroGray, a rigid opaque photopolymer 3D printing material used in PolyJet 3D printers. Each different handle turned the tear drop shaped blades into different types of tools, including spears, chisels, axes, adze, and even a tripod display holder.

The tools may look a little silly with their plastic handles and modern ropes and belts, but the point isn’t to make Stone Age tools useful again, it’s to contrast how incredibly far we’ve come as a species in such a spectacularly short amount of time. For almost all of prehistory stone tools and weapons were pretty much all that we had. We used them to till the soil so we could grow better crops and to chop down trees so we could build sturdier dwellings. We used them to kill and prepare our food, and then we used them to create clothing from the animal hides. We used them to protect ourselves from wild animals and sadly we often used them to attack or defend ourselves from other humans. For a million and a half years we built our world using broken stones stuck on the ends of sticks and in only a handful of thousands of years we’ve created a machine that can create other tools for us at the press of a button.

After the end of the Stone Age we moved into the Bronze Age, a period of time that is defined by us learning to evolve from stone tools to crude metal tools. Then came the Iron Age when we learned to press our trousers–i mean refine our crude metal making techniques and use primarily iron tools and weapons. So what then will our historical period be designated when our cities eventually crumble into antiquity? Let’s hope it isn’t the Plastic Age, apt as it may be. 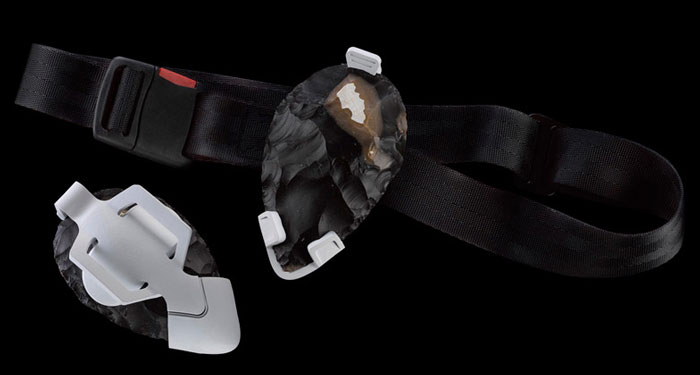 In historic terms we’re just a stone’s throw from using these primitive axes and chisels to creating a machine that can create just about any object that we can imagine. We’re still in the infancy of our modern age, so how it will become defined historically is completely unknowable. However it isn’t hard to imagine that the concepts and basic techniques of 3D printing will be very heavily informing our future.

Visit Ami Drach and Dov Ganchrow at their website, and see all of the Stone Age weapons and their 3d printed handles on dezeen.com.