Ask anybody at your job or any of your friends and family to tell you which country makes most of the stuff that they use on a daily basis, and the answer you will most likely receive is “China.”

For decades, nations in eastern Asia, such as China and Taiwan, have built up a global manufacturing powerhouse based on the principles of mass production and cheap labour. Many have also done an excellent job of adapting to twenty-first century technology, and they now supply electronic components for a very large portion of all the consumer electronic products in the world. China and Taiwan have been the go-to countries for outsourced manufacturing for western nations, slowly drawing production away as a result of attractive lower costs.

Now that 3D printing technology—or, as it is also called, additive manufacturing —has reached “escape velocity” in terms of investment, research and buy-in price, the possibilities to fundamentally change the way businesses create products are very real. As 3D printing continues to evolve to accommodate more and more production-based applications, it could begin to reverse the outsourced manufacturing trend and bring production back to the West.

Naturally, just as the development of this technology has some positive economic implications for western nations, the same potential implications could be negative for a nation with an economy based on manufacturing.

Instead of waiting to see if proliferation of the technology ends up hurting its global manufacturing dominance, China recently began leading the East’s response to these implications with ramped-up investment, research and activity in the 3D printing space. Its goal is to become a dominant player in 3D technology within three to five years.

The newly formed Chinese 3D Printing Technology Industry Alliance is already promoting development of the technology in China. The country currently holds only a very small portion of the total market share for sales of additive manufacturing systems compared to other regions, but this is not truly a good indicator of the country’s fresh commitment to the technology.

China’s proactive approach to turn a potential threat into a new opportunity is a smart move. But will it successfully buy its way into becoming a 3D printing powerhouse? 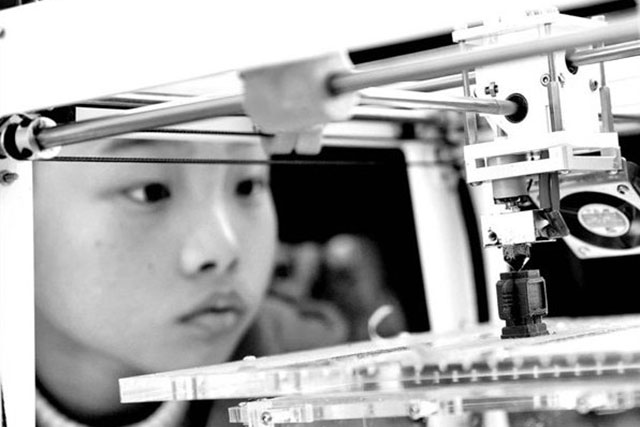 Recently, Terry Gou, president of Foxconn Technology Group (also known as Hon Hai Precision Industry Co.), made statements in which he claimed that 3D printing is simply a gimmick. Foxconn, a Taiwanese company, is the world’s largest electronics contract manufacturer and has 13 factories in China. It goes without saying that Foxconn is a primary representative of the East’s, and specifically China’s, manufacturing empire.

In his statement, Gou went on to say that Foxconn has been using 3D printing technology for nearly three decades, and that the technology is not suitable for mass production and therefore has no commercial value.

This type of statement, from the president of one of the world’s largest manufacturing organizations, certainly sends some mixed signals regarding China and other eastern nations’ commitment to 3D printing. Gou is absolutely correct in his assessment that 3D printing technology is not suitable for mass production. But by looking at the future in terms of the present, he is overlooking some important points about 3D printing’s future.

If one of the East’s largest manufacturing organizations does not see 3D printing as anything more than a gimmick, what impact will that have on China and other similar nations’ goals of becoming leading innovators in manufacturing? How many other manufacturing companies will remain dedicated to the current manufacturing paradigm?

The key to the East’s development of 3D technology will be to overcome the mindset among organizations that because 3D printing currently is not a viable replacement for mass production, it isn’t relevant to their business. 3D printers will likely never produce whole cell phones (an example cited by Foxconn’s president), but what happens if they could eventually produce a few more of the components found in them, like circuitry? Until this disconnect in principles and practice is overcome, nations like China may not become the manufacturing powerhouses of the future as quickly as they would like.