The Artist and the Prosthetist: An Interview with Tom Most on 3D Printing

A short while ago, I got a chance to attend the 3D Printer World Expo. Most drawn to the medical applications of the technology, I sat in on a lecture series titled “Innovations in Medical 3D Printing”. As the series exposed visitors to the current applications in 3D printing for internal and external applications, I learned about the work of Thomas Most, an artist and prosthetist. While his life may seem divided between his online store/freelance service, Mostly Fantasy, and his day job performing CAD modelling for prosthetics, Tom explained to me that the two worlds aren’t all that different. 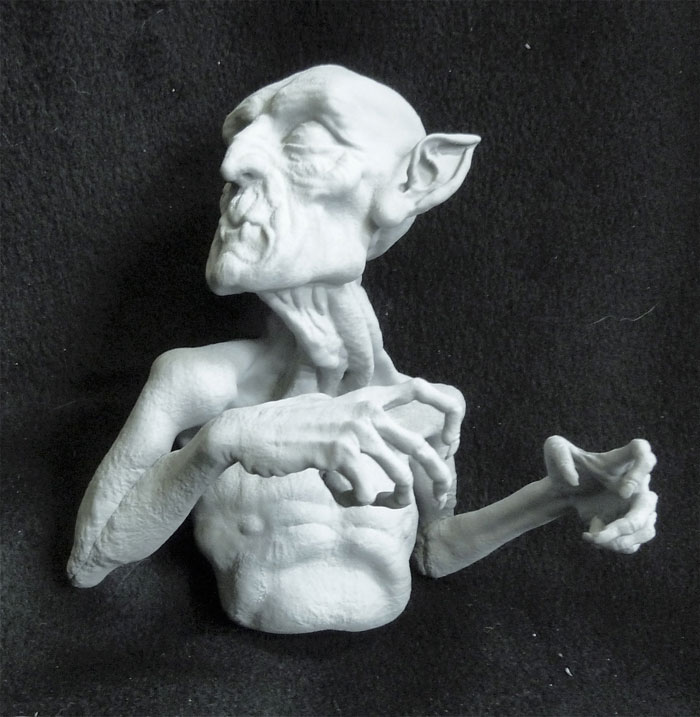 Tom began his career obtaining a bachelor’s degree in sculpture, allowing him to get into prosthetic makeup, followed by the display and toy industries. When he was first exposed to 3D printing technology, he immediately understood the advantages it offered, saying, “I knew from the day I first saw an SLA [machine] in action that this industry was going to have a huge impact on my own personal work. Having come from the toy industry, where (at the time) we were still doing enlargements/reductions by hand, I could see the potential with 3D files, just for enlarging/reducing a sculpt. So it was a pretty natural transition from transitional sculpting to digital.” 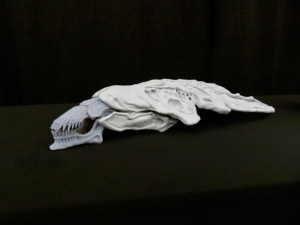 With digital modelling software, it became easy for Tom to alter designs in the virtual space before ultimately creating the physical object: “The motivation, aside from allowing incredible freedom in what I can sculpt (i.e. letting me sculpt something that would be, in the physical world very difficult, if not actually impossible), also allows me to make changes/iterations without having to waste time/materials. The queen alien skull, for example, went through 31 iterations before I settled on the final design, and didn’t cost a cent in the making.” At the same time, translating those models into a physical reality with 3D printing gives Tom a flexibility in regards to print media, “Using 3D printing also allows me the choice of printing techniques/materials for the finish I want for a particular piece, and letting me switch materials easily, all from the same file.”

Since he started, he’s since transitioned from the art of fantasy to the art of medicine, moving from toy making to rapid prototyping and, finally, to prosthetics and orthotics, pointing out that the same software and manufacturing practices can be used equally for art and prosthetics, you just end up with a different result. When he was in the process of obtaining his prosthetist license, Tom played a small role in the DARPA prosthetic hand project. The researchers at DARPA wanted to make replicas of their prosthetic, so Tom found them a solution with 3D printing.  It was during this time that he began to see the cost-saving and customizability possibilities of additive manufacturing. 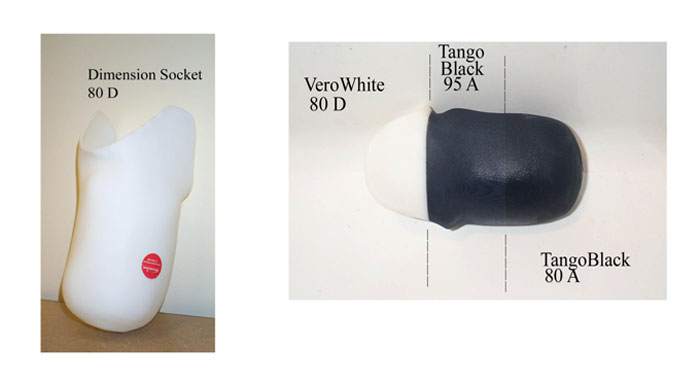 While in his prosthetics residency, Tom wrote a report titled “A Study of the Practicality of using 3D Rapid Prototyping Techniques, Methods and Materials for Prosthetics and Orthotics.”  In it, he explores the various methods of AM and how they might be used to create custom prosthetic arm sockets, coming to the following conclusions:

First, I wanted to determine if the processes was possible, and yes, it was. Fairly easy, as well, once I determined the way to convert the .aop file format to the .stl format needed for the prototyping machines.

Secondly, I wanted to determine if the process was economically feasible — anyone can make something more slowly and for more money — if the process wasn’t economical, that would be the end of the project/study — it’s not worth it for any company to make the same product for less profit. Initial comparison of the prototyped socket vs. traditional fabrication indicates the prototyped processes produces product for about 50% of the cost of processes currently being used (based on in-house labour/ material prices).

Third, was the process practical? Although the smaller FDM printers (some of the slower processes) can take between 8-12 hours to build a socket, the machines can be run at night as an autonomous “2nd shift”, and preliminary data suggests that the laminate/ABS combination is, at least, on a par with properties of laminated material currently used, if not stronger — there is also a possible weight savings, as the ABS “matrix”, while bonding with the resin, does not actually absorb resin as do the layers of cloth (Dacron, Nyglass, etc.) currently used in traditional lamination. This may also produce a more consistent strength in socket production, as a more ideal proportion of resin to matrix strength could be more consistently/easily achieved, but this bears further investigation. There will always be a learning curve with new technologies, but I believe the investment is worth the time, based on these preliminary findings.

Since conducting this research and becoming a certified prosthetist, Tom’s found that the prosthetics and orthotics fields are slow to adapt to new technology.  As a result, he continues his research independently with his own patients. In addition to printing sockets in ABS, with FDM, and PA, via SLS, Tom’s expanded his materials to include SLS nylon. He says that his patients have been quite satisfied with the results.

Tom also emphasizes the value that 3D printing has for the orthotics industry. At his lecture, and presumably in everyday life, Tom wears personalized 3D printed insoles. He didn’t have access to the proper software or time to construct orthotics based on a scan of his feet, so he opted for scanning an old pair of his own inserts, printed via SLS out of nylon. Others have since followed in Tom’s footsteps, such as 3DOrthotics in Australia and FDM Digital Solutions in the UK.

The artist/prosthetist is now in the process of convincing the industry and the world of the power of 3D printed prosthetic sockets. Not only did he speak at 3D Printer World Expo, but he gave a lecture at the 3D PrintShow in London and will be doing the same in New York this week. The 3D printing industry, of course, understands that the technology can allow for the affordable construction of highly customized prosthetics, but the prosthetics industry is still waking up to that fact. If the two industries do see a way of intertwining, Tom envisions a future in which customized prosthetics can become a form of self-expression, perhaps reducing the social stigma surrounding disability, saying:

As I mentioned previously, making prosthetics/orthotics is not that much different from creating a digital sculpt. They both involve fairly similar software/processes, just for a different end result.  In fact, I can see combining the two in order to make customized sockets/components. Say that, instead of a transfer image, a patient wants a bas-relief of the same image as part of their socket- it could be done fairly easily, giving the patient a customized personal device. The same software/process could also make a “mesh” socket, reducing weight/heat, etc.  The possibilities are really wide open!