3D Printing at home with metals is now truly an emergent trend. The release of an open source welder based home 3D printer this month has caused massive ripples in the open source 3D printing community on social media. This is further to the a crowdfunding project for the Mini Metal Printer initiated in November, an emergent Liquid Metal Jet Printer (LMJP) and the ongoing RepRap open source MetalicaRap.

Now, Esteban Schunemann, PhD student at Brunel University in London has announced the Newton 3D Home Metal Printer… Newton 3D’s publicity tag line is ‘Just like Isaac Newton whose scientific discoveries lead to the industrial revolution, Newton 3D innovates in bringing metal 3D printing to the desktop environment.’ Whilst the list of home 3D printers at the start of the article make this statement seem a little over the top regarding an analogy to scientific discoveries by the author of the Principia Mathematica and many of the fundamentals of modern physics, speculation that in time the advent of home metal 3D printing will be a momentous breakthrough may be no overstatement. 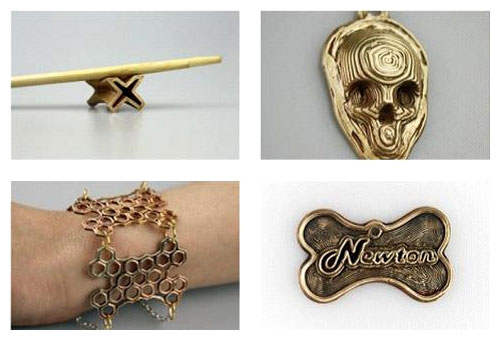 “Mortals rejoice that there has existed such and so great an ornament of the human race!” – Isaac Newton’s tombstone.

Inventor Esteban Schunemann authored a PhD project entitled ‘3D Deposition of Silicone and Metals: An Exploration into Real World Applications.’ The primary focus of Esteban’s has been to investigate the possibility of using 3D printing as a means of manufacturing products.

To quote from the outline of the project:

‘Naturally every manufacturing process has limitations that determine what can or can’t be manufactured with that specific process. As such Esteban’s research has developed a range of products and applications keeping to the strengths and weaknesses of the process.

The machine developed for research is capable of printing in a large range of materials, including but not limited to: rigid polymers, elastic polymers, ceramics and metals.’

Esteban has already been awarded the joint winner prize for the Goldsmiths’ Technological Innovation Award 2013 by the Craft and Design Council.

The release of information has been staggered carefully, first an email to myself and colleagues regarding the presence of the printer for purchase. Then came an email with a link to the webpage with a few videos of the printer in action. Whilst I’ve spotted other 3D printing news channels suggesting that they have unique access, these videos were sent out in the usual blanket group mail one would anticipate for a marketing strategy for any commercial product.

The project is backed by the UK’s current largest independent 3D printing specialist venture capital course iMakr.vc. iMakr has a very corporate approach and has reached out with a very strong strategy into most home 3D Printing niches. iMakr has appeared on the BBC, partnered with politicians to get their 3D ‘selfie’s’ into elite London store Selfridges and much more.

This company is approaching 3D printing far from an open source or maker approach, quite the opposite — but as a source of capital, undoubtedly they are primarily in it for the money, but they are also a cataylst for innovation for those not wishing to peruse and pursue the crowd funding approach.

The early specs for the Newton 3D are as follows: the metal is in the form of metal clay. The 3D printer has a standard resolution of up to 400 microns and a low build volume of 5 x 5 x 2 inches – low, but perfectly sufficient for jewellery and small mechanical items. There is much potential here.

This is a very similar set of specifications to the Mini Metal Printer, which is currently in its last week of crowd funding over on IndieGogo.