There is only one word to describe Amsterdam, and that would be: “cool”. The term does not refer to the temperature either, especially not in July. Amsterdam is cool because it has everything and it offers everything to everyone. So what better place for personalized manufacturing to take hold? The manufacturing perfection reached by Erik Swetter with his Ultimaker at his Printed in Space shop, the Dutch city’s first of its kind, believe it or not, transforms the store into a dream of a place where ideas magically become real, physical objects. 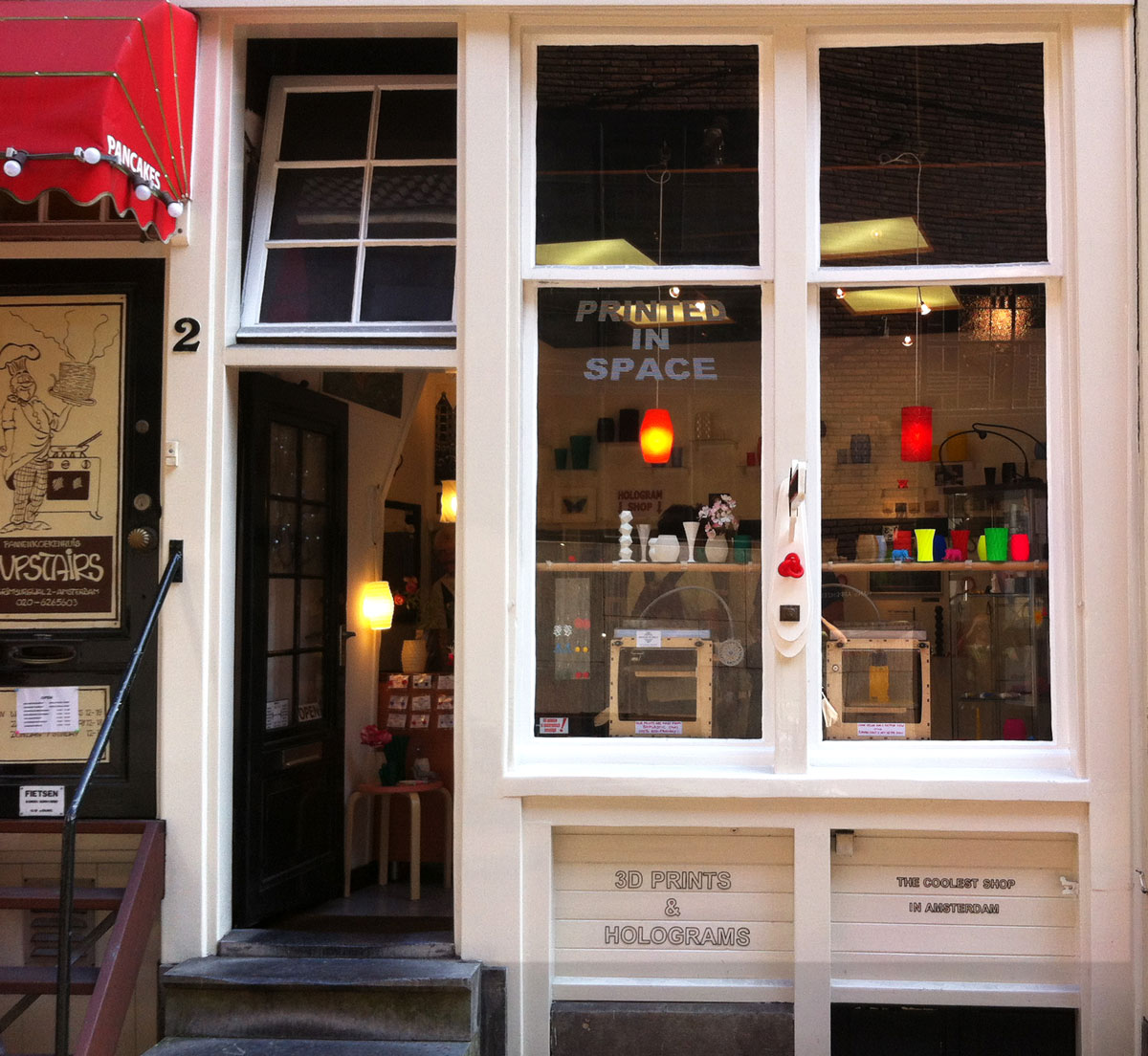 Printed in Space ha s a mysterious, fascinating aura even before entering. It is located in one of Amsterdam’s most suggestive corners and it doubles as a hologram shop, which was Erik’s main activity until discovering 3D printing, both connected by 3D and 3D modelling. Erik does all his own modelling and printing. Perhaps it is because he has been open for slightly longer, perhaps it is because the shop is smaller in size than most of the other 3D printing retail outlets I have visited over the last year, but the first thing I noticed upon entering is the great number of 3D printed objects on display and for sale. 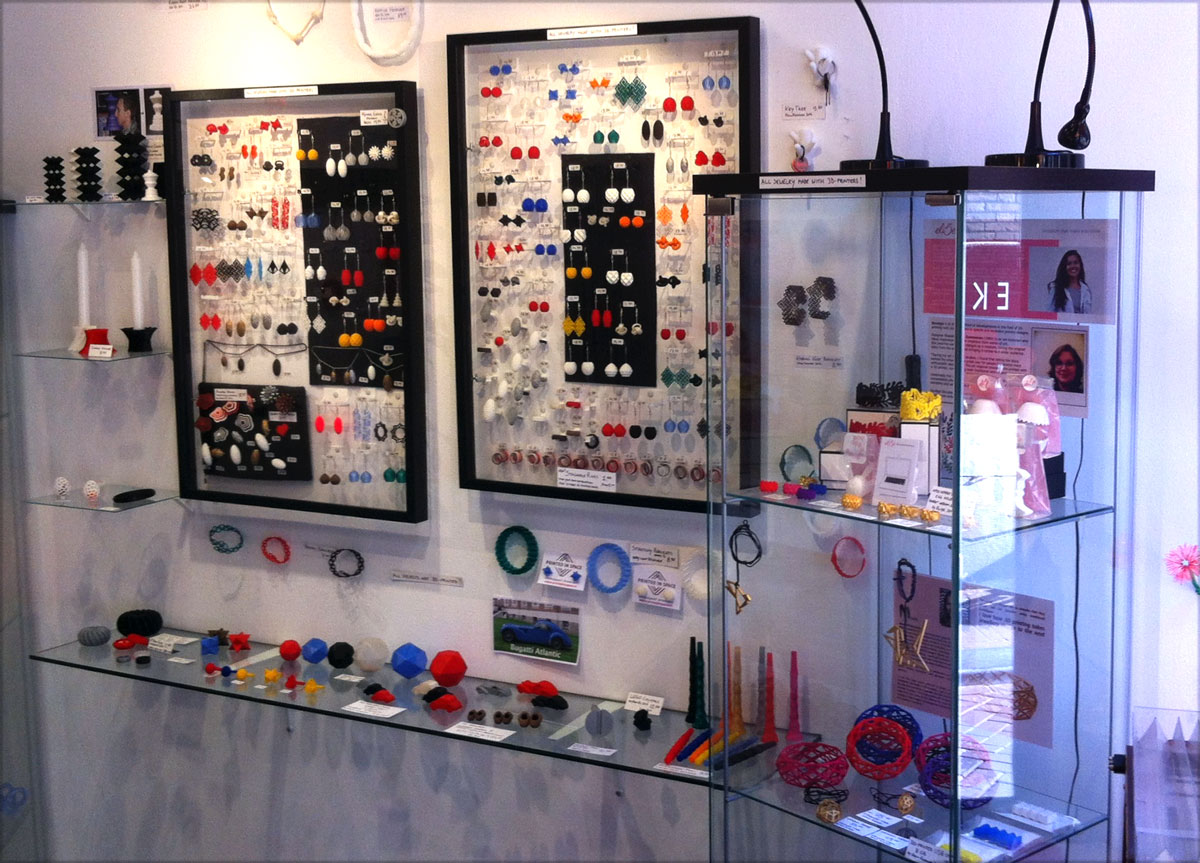 Unlike most of the other 3D print shops I have visited throughout Europe, which either tend to follow the Fab Lab model or become 3D modelling and rapid prototyping services with windows, ‘Printed in Space’ is a pure 3D print shop, that sells 3D printed objects and 3D prints objects on demand. 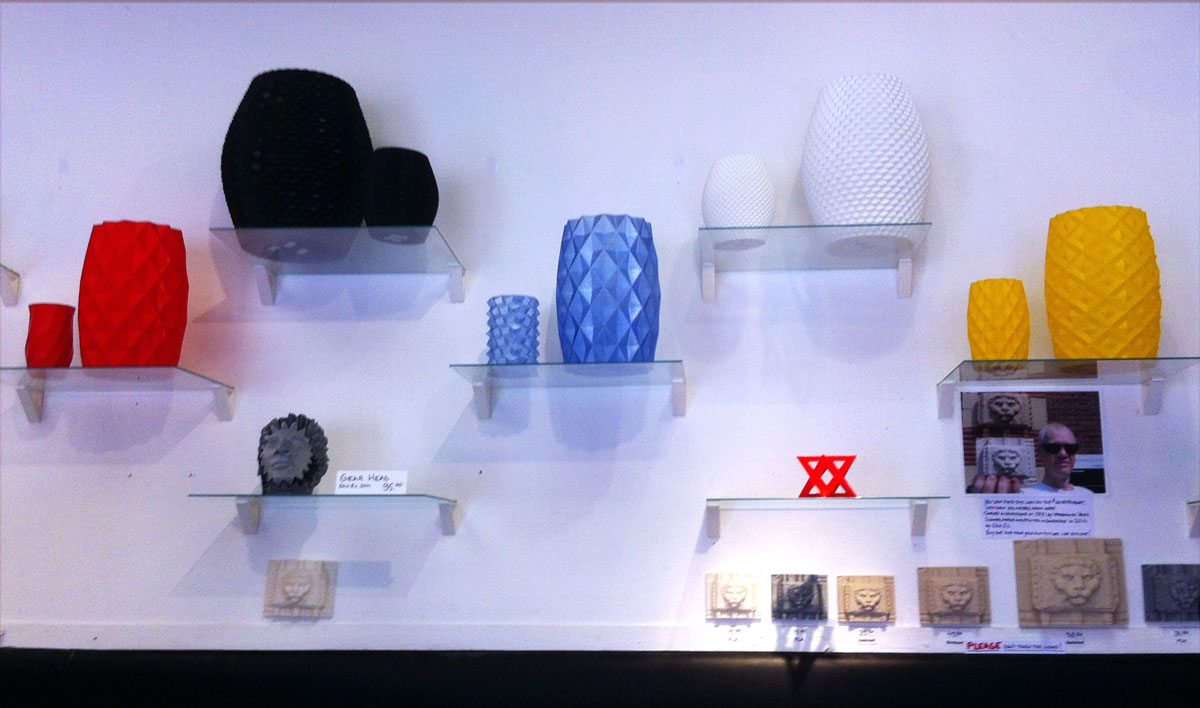 Erik can support this business model because the shop was already established as a hologram store (the separated hologram section is still quite impressive) but also because he is simply great at 3D printing. Even without further finishing, his objects have no errors that can be seen and have amazingly thin walls with highly complex shapes. The smaller objects, like earrings or bracelets are original and detailed. “Using a 3D printer is like running a locomotive,” he says. “You can’t just start it and let it go, you have to play and tinker with it, adjust it constantly to get it to do the best possible job.”

Erik told me that business is going great and that he is selling a lot of 3D printed products. His case might still be rare on the consumer scene, both because this high footfall location in  Amsterdam is particularly well suited for selling original jewellery and accessories – the kind of consumer products that can be produced today with a desktop 3D printer – and because Erik is a particularly talented artist. Elisa Luttik, a Dutch designer of 3D printed objects that we have covered in the past, is collaborating with him and helping him attract a more heterogeneous clientele. Whether Printed in Space is a business model that can be replicated elsewhere remains to be seen, his success, though, remains a great indication of what can be achieved with talent, dedication and an Ultimaker original.