What is the largest 3D printing facility in North America? It seems like a straightforward question, but depending on if you are speaking to the marketing or engineering department – the answer can differ.

3D Printing Industry takes a look behind heading grabbing phrases such as the world’s largest 3D printing factory and spoke to experts to get the facts.

As industrial additive manufacturing progresses, manufacturers, service bureaus and engineering firms have invested in facilities housing various 3D printing technologies. The U.S. has seen the recent establishment of facilities such as the Emerging Technology Center in Athens, Alabama, designed to support industries including aerospace, transportation, and oil, gas & energy.

California has also seen the addition of an Advanced Manufacturing Laboratory (AML), from Lawrence Livermore National Laboratory (LLNL) which intends to accelerate research using additive manufacturing equipment. In the healthcare and dental sector, facilities including the Jabil 3D printing center of excellence, have been established for end-to-end scaled production of medical devices.

Of the significant investments made on such sites, many present themselves to be the “largest” or have the “most 3D printing systems.” Recently, SmileDirectClub, a Nashville-based teledentistry company,  has declared its existing clear aligner manufacturing operation in Antioch, Tennessee, as the “largest 3D printing facility in the United States.”

We’re no fans of hyperbolic claims here at 3D Printing Industry, and for a while, it seemed terms such as world’s largest and world’s first had ceased to be bandied about.

But how should such a claim be tested? Is it based on the number of operational systems, the production capacities and or overall sizes of a U.S. 3D printing facility?

Last year, SmileDirectClub and HP announced a partnership to increase the production of its customized clear aligners. As a result, 49 HP Jet Fusion 3D printing systems were deployed at the Antioch site running 24/7 to produce over 50,000 unique mouth molds a day, an estimated 20 million molds yearly. Speaking with 3D Printing Industry, the company expressed plans to deploy 11 more in the next couple of months to meet increasing product demands, as well as a second manufacturing facility in Kyle, Texas, set to be established this year.

The company declined to provide numbers, but based on the information above SmileDirectClub will have around 60 3D printers at its Antioch site as of 2020. This figure accounts for the reported HP systems. It’s unclear if they have other additive manufacturing systems.

Its competitor, Align Technology, the Californian company behind Invisalign, produces over half a million unique 3D printed parts per day using an undisclosed number of 3D Systems additive manufacturing machines.

Elsewhere, a source at 3D Systems tells us that the number of 3D printed parts produced at its 60,000 square foot Lawrenceburg, Tennessee, facility is estimated to be four times more than SmileDirectClub. The figure was provided to us but the company, however, it will remain undisclosed. Suffice to say, 3D Systems may be holding or just shy of 3D printers in the three figures at this plant.

On a broader scale, Minnesota-based on-demand digital manufacturing company Protolabs holds eight facilities within the U.S. All of its 3D printing requests are dealt with at its additive manufacturing site in Raleigh, North Carolina. This spans from approximately 77,000 square feet and operates over one-hundred 3D printers, including the 3D Systems Viper SLA machines and HP Multi Jet machines.

Moreover, EOS North America shared with us that it has the “largest global installation of powder bed fusion 3D printing systems in both North America and globally.” Nonetheless, the company was not at liberty to disclose the number of installations.

Although it is clear that SmileDirectClub does not have the largest U.S. 3D printing facility, the company does indeed have a significant amount of HP Jet Fusion systems. In contrast, Californian 3D printing service provider FORECAST 3D, which is believed to be the first to offer MJF production at this scale, holds 28 HP Jet Fusion 3D printers in its 49,000 square foot manufacturing space, and 47 industrial 3D Printers overall, the company tells us. 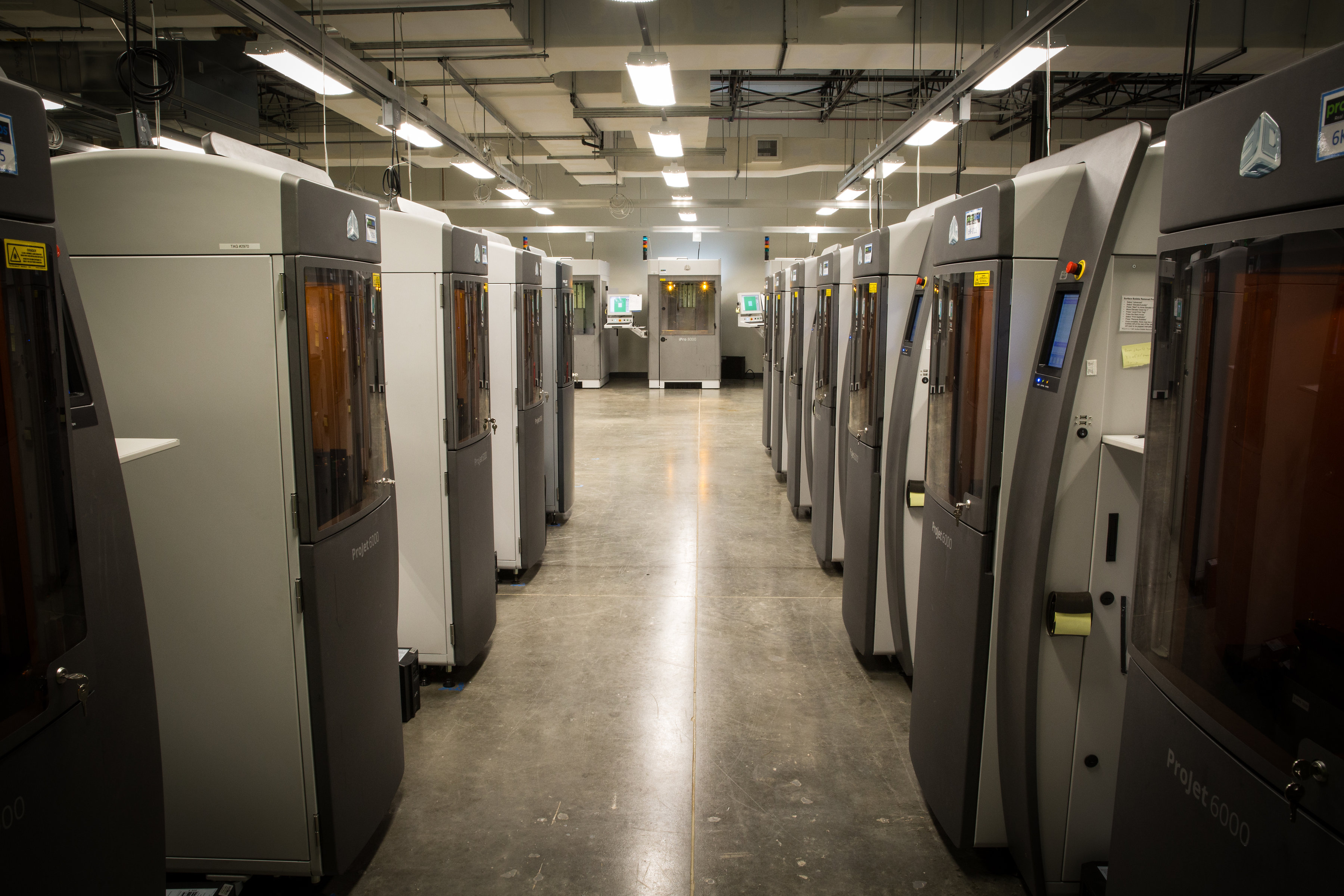 With all these figures being thrown around, here is a direct comparison of the 3D printing facilities mentioned:

Disclaimer: Several replies are still pending from other facilities throughout the U.S.

Featured image shows the interior of an EOS facility.

Tia holds a BA in journalism, and has a background in writing news and features and is a senior journalist at 3D printing industry.