At the start, it took Aleph Objects over two and a half years to print 500,000 printer parts, but they now have the capability to match that production amount in just a single year. Unlike the 3D printed parts before it, this lucky one millionth production part, which is a large herringbone gear, will be put on display at Aleph Objects to commemorate this special milestone. 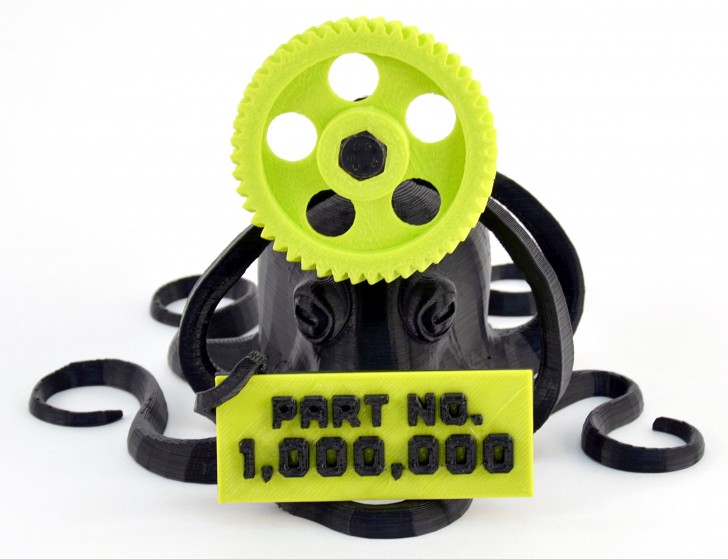 The unique ‘self-production’ operation taking place at the Cluster, which includes both LulzBot TAZ and LulzBot Mini printers, is inspired by the method pioneered by the RepRap Project. There’s a good reason Aleph Objects is using this method, too, as it is much more affordable and quicker than using traditional processes like injection molding.

“The alternative to having Cluster producing those parts would be injection molding everything, but the injection molding cost for a die could be thousands of dollars and upward,” said Stan Middlekauff, the production supervisor at the Cluster. “With the Cluster now in place, the up-front cost has been paid for us to make any type of part. Plus, if at any moment in time we need to change a part, we can change it quickly.”

Though the Cluster may have a large amount of 3D printers working on-site, Aleph Objects’ base also serves as an educational component and experimentation platform for their R&D team. “On the R&D side, Cluster is itself a long-term test environment for harsh conditions of our printers to see durability and longevity, and also an individual piece-by-piece testing structure for any changes that need to be made or want to be made,” Middlekauff added.

As you can see, Aleph Objects has a pretty solid reason to celebrate, as the one millionth part signifies more than just another self-produced 3D printer part; it also demonstrates the expansive growth and innovation that LulzBot has undertaken over the years. If you want to see the Cluster in action, Aleph Objects hosts a public company tour every Friday at 2 p.m. (Mountain time).