Here on Earth, many of us can’t start our day off until we’ve had a sip of that first cup of coffee, and the astronauts in the International Space Station are no different. But due to the microgravity in the ISS, these astronauts generally have to drink instant coffee from a bag with a straw (yuck!). 3D printing technology has dabbled in the world of coffee on quite a few occasions, whether it be through caffeinating 3D printers with a coffee-based filament or conjoining a 3D printing store with a cafe in Berlin.

Now, a graduate student in the Mechanical Engineering program at Portland State University , named Drew Wollman, has used 3D printing technology to give the ISS astronauts a new and improved way to brew and drink their coffee. ISS astronaut Kjell Lindgren got in contact with Wollman, and his professor Mark Weislogel, after discovering their zero-gravity espresso cups in Wired Magazine’s The Most Cleverly Designed Objects of 2015.

And so, using a 3D printer, Wollman and Weislogel created a new espresso cup equipped with a modified brewer attachment, called (by Lindgren at least) the Capillary Beverage Cup. A syringe filled with hot water is pumped through an attached K-Cup, which creates freshly brewed coffee directly into the printed espresso mug. The geometry of the espresso cup creates a surface tension that brings the freshly brewed coffee right to the lip of the cup, yet remains held in place within the 3D printed device. Though coffee is certainly an important part of almost anyone’s day, the geometric design of Wollman’s 3D printed cup could lead to even greater innovation for these astronauts. 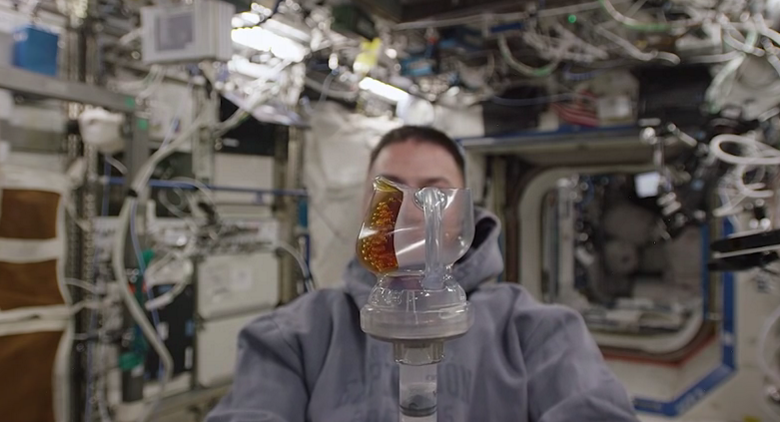 “We’ve been testing this cup up here as a way to see how fluids flow,” Lindgren said in the YouTube video presenting Wollman’s device. “The applications for something like this are fairly tremendous. If you can move fluids without having to use a pump, mechanical moving parts, or electricity and power, that’s highly beneficial for a system like the space station.”

The method developed by Wollman and Weislogel has certainly stirred up the excitement on the ISS (as you can tell by the giddy Lindgren in the video above), who can now freshly brew their coffee even while living and working 250 kilometers above the Earth. And who knows what other innovations this 3D printed espresso device will lead the ISS astronauts to? I’m sure their minds will be even sharper and more awake now that they can begin their day floating around with a fresh cup of joe.