Know Your 3D Model Rights! MakerBot and Others Respond to Thingiverse-eBay Controversy

If you happened to miss out on the controversy involving Thingiverse last week, here’s a quick recap of what went down. One Thingiverse user, named loubie, had noticed that her design had been taken straight from Thingiverse and was being sold in 3D printed form on eBay by a an account vaguely named just3Dprint. Upset that there was no compensation, let alone any credit or recognition for her design, loubie got the attention of the Maker community by telling her story on Thingiverse through her Sad Face model. Since then, other Thingiverse users have noticed that their designs are also being sold by just3Dprint on eBay, and the controversy has even garnered a supportive response from 3D printing law expert Michael Weinberg. 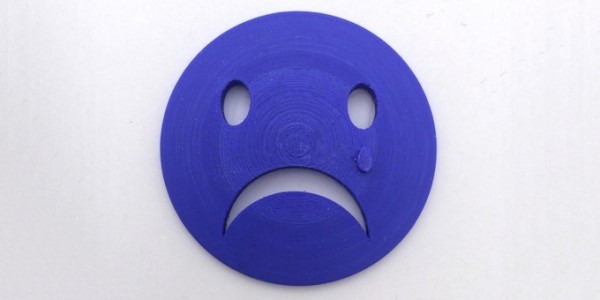 Now, likely due to rising complaints within their Maker community, MakerBot has just released a statement addressing the controversy, and seems to be (wisely) backing up loubie and the rest of their Thingiverse users. In the statement, MakerBot claimed that their users are able to select the license they wish to protect their design, and this includes an option for a Creative Commons (CC) license. Therefore, assuming that at least a few of the 2,000 3D printed models being listed for sale by the eBay account have a CC license attached to them, just3Dprint is clearly in violation of the Thingiverse terms of use.

But the issue here seems to be the fact that Thingiverse doesn’t own the models upload by their users, so what can they really do to stop third party platforms such as just3Dprint from violating their terms? This is a part of their recently released statement that muddles the answer to this question up a bit:

MakerBot is committed to protecting the rights of its community members. In the case of the eBay seller mentioned above, our legal team is preparing communication to the appropriate parties. Since MakerBot does not own the content that our users upload to Thingiverse, we also encourage community members who recognize third party conduct that violates their CC licenses to contact the platforms that are harboring such behavior.

So although their legal team is reportedly working on communications with the eBay seller, they are clearly encouraging their users to reach out to just3Dprint themselves. The problem with that, which was made apparent by their response to loubie, is that just3Dprint doesn’t seem to think they’re in the wrong here. “When you uploaded your items onto Thingiverse for mass distribution, you lost all rights to them whatsoever,” just3Dprint said in response to loubie. “They entered what is known in the legal world as “public domain”…No court in the USA has yet ruled a CAD model an original work or art. Therefore, you have no right to exclude others from utilizing the CAD models you have uploaded.”

By telling their users that they support them, but that they should try and deal with it themselves or through a lawyer (which I assume most Thingiverse users can’t really afford), it’s unclear exactly how MakerBot plans to alleviate the situation. However, some other 3D marketplaces, such as Cults, are taking this controversy as an opportunity to try and show why their services may be a safer alternative for 3D models. According to the Cults team, every 3D design on their platform is protected with a CC license as soon as it is uploaded. Here’s a part of the Cults team’s statement addressing the Sad Face controversy:

“Contrary to Thingiverse, on Cults you have to register to be able to download a creation. And when creating your account, you have to fully accept our Terms and Conditions, where it is strictly specified that, unless you decide to do otherwise, no one can use your work for a commercial purpose.”

It seems that, if this issue expands or gains anymore traction in the maker community, MakerBot may have to rethink the way that the Thingiverse terms of use work. Though I’m sure they had nothing but the best intentions by putting the creative licensing of 3D models into the hands of their uses, the unclear, hands-off approach they’ve taken may be a big reason why this has happened. Like loubie, I’m sure many Thingiverse users now feel that their 3D models are vulnerable to being downloaded and sold by vague third party platforms like just3Dprint, which is a feeling that I’m pretty sure MakerBot does not want their Thingiverse users to have. Here’s to a quick (and hopefully painless) resolution!