Stocks and investments — whether you are a lover or a hater, they tend to get people hot under the collar. After all, money, usually in significant quantities, is involved. The alternative is indifference, or, possibly, ignorance. I tend to slot in somewhere between the last two. However, I’ve had to pay a bit more attention over the last year or two as the burgeoning 3D printing industry has become a darling of the stock markets.

3D printing stocks have, overall, been on a steep upward trajectory. Depending on whether you are a “bull” or a “bear”, this will likely continue for some time yet or all come crashing down. This is a feature of the stock market in general though — gamble and make money or gamble and lose money. To date, investors looking at the 3D printing industry have had to research 3DP companies floated on the stock market for themselves and decide one way or the other on specific share investments.

However, as last week came to a close, news broke of a new — and the first ever — mutual investment fund covering 3D printing and additive manufacturing. Named the ‘3D Printing and Technology Fund,’ it was introduced by Outlook Funds Trust as its inaugural fund together with the announcement that it will be managed by 3D Printing Fund Advisers, LLC, with Alan M. Meckler serving as Senior Portfolio Manager and John M. Meckler, his son, as Co-Manager and Chief Compliance Officer. 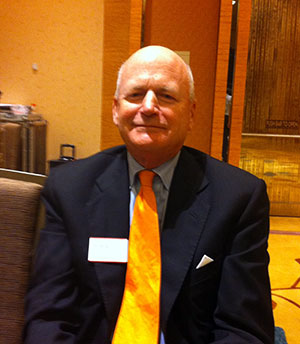 You may recognize that name, Meckler Senior is the CEO of MediaBistro, a company that provides business-to-business services for creative, business and information technology professionals. Among its portfolio is the international Inside 3D Printing Expo brand, the next edition of which will take place in Berlin next month.

It is clear to me that Alan Meckler believes in the future of 3D printing. I immediately understood this when I first met him in Singapore last year. I sensed then that while our common ground was, obviously, 3D printing — past, present and future — and we agreed on plenty then, and in our communications since; that our perspectives will be forever different. Alan Meckler has an aura about him — he is a business man through and through with a touch of ‘headmaster’ (or Principal for US readers) mingled in; which probably explains his success in his chosen fields.

This new mutual fund, a separate entity to MediaBistro and Inside 3DP, is further evidence of Alan’s conviction about the future of this technology sector. I got a chance to catch up with Alan when the news of his new venture broke to ask a few pertinent questions:

Rachel Park (RP): As the head of MediaBistro you have been, and continue to be, instrumental in taking 3D Printing on a global road show to huge effect. This new, and separate, venture is quite a departure from your media expertise, can you tell us about the motivation for the Outlook Funds Trust, and specifically the mutual 3D Printing and Technology Fund and 3D Printing Fund Advisers, LLC?

Alan Meckler (AM): It has been a long time coming — back in the early 1990s when I was in the middle of all things Internet and had the Internet World trade shows (they ran in 20 countries), I was the first person at that time to think of a mutual fund devoted to Internet stocks. I gave the idea to others, who launched, and went on to make a huge amount of money. It dawned on me last summer that 3D Printing, in its commercial infancy today, is much like the Internet was in 1994-95. And that the mutual fund idea for 3D printing and technology, if open, was giving me a chance for a redo so to speak — and thus the idea.

RP: I’m sure I am not the only person with an avid interest in 3D printing that does not fully “get” or have a specific interest in the heat around stocks and investments with this technology. For the layman, can you explain the current status of the market as you see it and who it is for?

AM: I see this initially as a retail play for smaller investors who love the idea of — and believe in — a big future for 3D printing but are not sure which stock (or stocks) to buy. This fund offers them the opportunity to invest and to spread the risk across a large portfolio of 3D printing stocks so that they do not have to pick one or two. Then, if we are all correct about the upside over a long period of time, then the investor makes money. Within a year, I believe, if the fund performs well, that institutional money will come into the fund too.

RP: Which particular 3D Printing stocks are currently included in the portfolio? Will it include small cap stocks and big cap?

AM: I am not currently at liberty to disclose this information, as we have just launched.

RP: Will the portfolio expand with new 3D printing companies that will, inevitably, go public in the future?

RP: As I understand it, mutual funds are generally supposed to be ‘less risky’ but with 3D printing still considered by many to be in its infancy, is there an increased risk with this fund?

AM: As with any stock investment there is risk — however — our philosophy here is long term — and over time we believe 3D printing is a growth industry that is just now in the toddler stage. There is greater risk trading in and out of stock versus being a long term investor — anyone interested in the 3D Printing and Technology Fund should have a mindset that is focused on the long term and not necessarily be looking for a fast return.

Lacking a certain confidence in my own knowledge on the markets, both Mike Molitch-Hou at 3DPI and Gary Anderson of 3DPrintingStocks.com, a regular contributor to 3DPI, made themselves available to help and/or comment on the content of this article. Thanks and credit to the guys for their support. Pertinent, I think, to also include Gary’s thoughts on this new development, his knowledge and research in this particular area of 3D printing is phenomenal. Gary told me:

The initial fund offering is available currently in one class —Institutional (TDPIX) — and the minimum investment is $2,500.

Before investing in 3D Printing and Technology Fund you should carefully consider the Fund’s investment objectives, risks, charges and expenses. This and other important information is contained in the Fund’s prospectus and summary prospectus, a copy of which may be obtained by calling or by visiting the Fund’s website.

There is no guarantee the Fund will achieve the investment objective. The Fund may not be suitable for all investors.