3D modeling has long been a skill meant for professionals, specifically in the field of engineering and product development.  Only more recently, as free and low-cost video game developers have become available, have independent 3D artists really started to get into the fray.  And, with 3D printing becoming accessible to consumers, these skills, previously cultivated through higher education and professional environments, are necessarily more relevant to the non-engineering class, resulting in a plethora of free and simple modeling platforms, like Fusion 360, TinkerCAD, and more.  The 3D ecosystem still has a long way to go before 3D modeling becomes as intuitive as Instagramming, but today’s iPhone announcement by Apple opens up a whole new pathway to bring 3D modeling to the masses.

The much-anticipated iPhone 6S and 6S Plus were finally unveiled today and, in addition to a 12-megapixel rear camera, some shiny colors, and 4K video recording capability, the tech giant introduced its first big feature since whatever the last one was: 3D Touch.  Once billed as “Force Touch”, 3D Touch introduces haptic capabilities to the company’s flagship phone.  Outside of Nintendo Rumblepacks (and later XBox’s own version of this shake-n-play feature), most consumers are not all that accustomed to haptic technology, which brings the sense of touch into the computing experience. 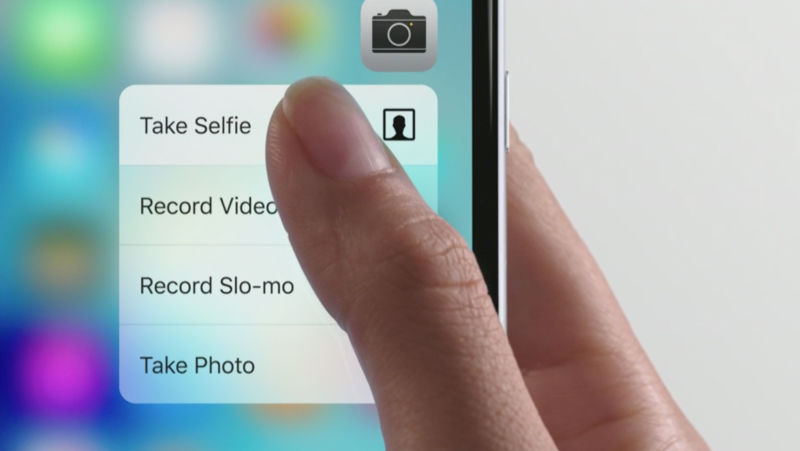 By varying the pressure applied to the iPhone’s touchscreen, different actions are implemented. Pushing lightly, or “peeking”, allows glimpses into apps without actually entering them. Pushing hard, or “popping”, on icons brings up a (right-click-style) context menu, for instance. And, with these varying touches come accompanying vibrations to provide haptic feedback to let users know what they’re doing.

More importantly than right-clicking and glimpsing into things, developers in the 3D world will be able to take advantage of the new capacitive pressures sensors, which measure the distance between the phone’s glass and backlight, to make for iPhone-powered 3D modeling. Like haptic-modeling tools already on the market, such as Leopoly or Geomagic, new apps could make it easier to sculpt an object, push harder for indentations and push more lightly for gentle sculpting.

Though Apple may not have released a 3D camera for the iPhone at this latest event, to compete with Google’s Project Tango, I’m becoming more and more sure that the iPhone 7 will have one.  When it does, along with an improved “Taptic Engine”, as they’re calling it, the task of bringing the 3D world onto the ubiquitous smartphone will be almost complete.