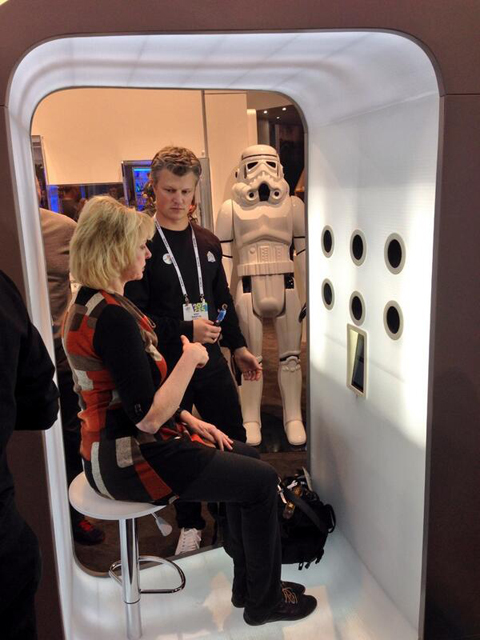 It was a big week for 3D printing period at CES this year, but un-arguably the star of the show was 3D Systems, who had not one, but twelve new product introductions. Commercial ready3D food printers, 3D sculpting mice, amazing ceramic printers and even a 3D printed doll house were among some of the new offerings, but the most exciting for me was the 3DMe Photobooth.

Envisioned as a product that can be installed into any mall, movie theater retail store or event space, the 3DMe Photobooth allows consumers to insert themselves into the retail 3D printing experience by offering lightning fast, full-colour 3D face capture. The 3DMe Photobooth was demoed on this year’s convention floor, and as you can see from 3D Systems’ video, it seems to be extremely user friendly and very customizable for businesses who bring them into their establishments. I’ve queued the video up to the relevant bit at 48:27 but the whole thing is worth a watch. (Seriously you guys, we can buy a machine that 3D prints candy! If 3DS produces a machine that can print me a boyfriend, I may never have to leave the house again!)

As with any traditional photo booth, you take a seat, strike a pose and let the camera do its thing. Then, once your 3D pictures are captured and converted, you will have the option to mash your face onto any number of pre-set, licensed statues and products powered by 3D Systems’ 3DMe cloud-hosting, publishing and fulfillment platform.

“Mainstreaming 3D printing for the benefit of everyone is at the heart of our 3DMe Photobooth development,” said Keith Ozar, Director of Marketing Consumer Products, 3DS. “We are committed to democratizing access to the entire 3D printing lifestyle and getting a ‘selfie’ mash-up makes getting there easy.”

Of course the same drawbacks that hamper all mainstream adaptation of 3D printing technology still remain. Having to wait hours – even days, if it has to be shipped – for your custom statue is going to be a big hurdle to leap for your average consumer sipping an Orange Julius and picking up a new pair of slacks at the Chess King. But while the print time may not be ideal, it is getting faster. The interesting thing about the design of the booth, for me, is the lack of an integrated 3D printing unit. I would imagine this would be significantly more appealing to a retailer looking to buy in because you won’t be buying printing technology that will be outdated in 6 months.  That way, you can continue to upgrade your printers as print speeds increase. I would be pretty shocked if 3D Systems didn’t offer bundles of Cubes with 3DMe booths as well.

3D Systems has plans to begin shipping consumer units in the spring, so there is a very good chance that we’ll start seeing 3D printing photo booths in our local malls and movie theaters just in time for the summer movie season. With new X-Men, Spider-Man and Wizard of Oz movies coming this year, it isn’t hard to imagine that I’ll finally be able to get that statue of me wearing ruby slippers while swinging from a building with Wolverine claws that I’ve always wanted.