A few weeks back at the Inside 3D Printing Santa Clara Conference I was able to try out the new Shapify 3D scanning booth from Artec Group and watch as the insanely detailed scan was processed and rendered in a matter of minutes. 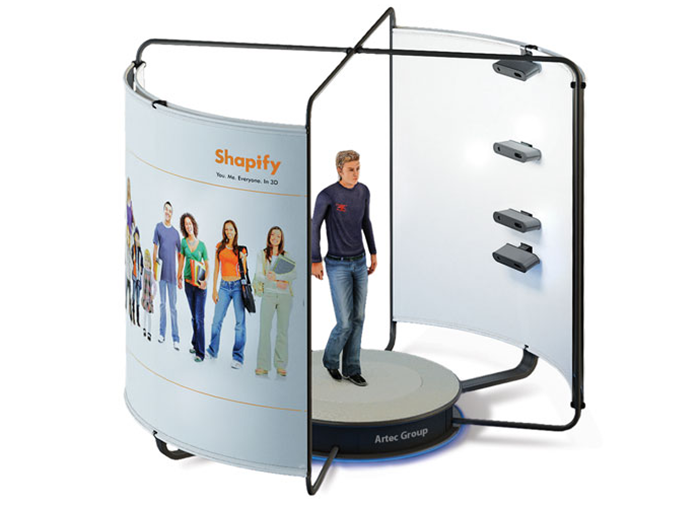 Artec’s Shapify Booth is arguably the first large-scale full-size 3D body scanner to hit the mass market. Several companies sell smaller handheld 3D scanning options, many of them quite powerful and accurate, however they are comparatively slow. 3D scanning with a handheld device can take upwards of five minutes, and it can often take hours to process all of the data collected into a 3D printable model. The Shapify Booth can capture an impressive 700 surfaces in about 12 seconds and turn it into a fully watertight 3D printable model in under four minutes.

I had the pleasure of talking to Artec’s Leonid Volkov about the Shapify Booth technology and get myself 3D scanned while I was at it:

Yes, the Artec team did catch me trying to take a selfie in the booth and yes they did need to restart the scan. I was live tweeting the conference and wanted to share the experience with all of you. Don’t judge me, I did it all for you!

It really is impressive how quickly the scan is over, and how fast the final 3D model is generated. The level of detail that it can capture in that incredibly short amount of time is absurd. Of course I had to be wearing a pair of hilariously baggy slacks on the day I got scanned, so it looks like I was just fished out of the river.

The scan captured every fold and bend in the fabric of my clothing as well as the bulge from my wallet, the comically thick ape hair on my arms and the detailed pattern on my shirt. It even captured the depressing bald spot that is rapidly expanding on the top of my head. Next time I get myself a full 3D body scan I’ll make sure that I wear tighter pants and a hat.

Artec is going to be selling and leasing the Shapify Booth to business and sports arenas so they can offer their customers 3D printed selfies that they’ve been calling a “Shapie”. There is no way that in the right location a booth like that isn’t going to be a huge draw. Especially if the customers can see the 3D model process and render right in front of them. Granted customers may need to wait a few weeks to get their physical Shapie, but Artec even offers a print and ship option that can have it sent right to their door.

The Shapify Booth is already being tested in several ASDA – basically British Wal-Mart –  locations in the UK, and if successful it is expected to expand to more locations soon. If you’re a business who wants to buy or lease a Shaify Booth you can find out more about the technology here.