3D printing with metal had been conceived of since the early 1970s and, in practice, has mostly been achieved using laser sintering (LS) although these days most people seem to be calling it laser melting, either way the process is very similar and involves fusing bits of metal powder together with the heat of a laser beam.  Researchers at North Carolina State University, however, have developed a new method for printing metal and the best part is that the metal is liquid… and conductive… and it can be printed at room temperature.

The researchers noted that most attempts to print liquid metal has been done by either encasing the liquid in a solid polymer or by introducing solid elements into the liquid to make them more stable.  The problem with the first approach is that the metal loses its conductivity and the second yields results that are often limited to a spherical shape.  Instead, they created a eutectic[1] composition of gallium and indium, a metal alloy that remains liquid at room temperature. Akin to fused deposition modeling (FDM), the researchers extruded the alloy out of a syringe. When the composite was exposed to air and oxidized, a thin film of gallium oxide covered the liquid metal as it was ejected so that it was able to form a structure shape, while maintaining its liquid properties and conductivity.

They then printed the alloy using a few different extrusion methods. The team extruded the gallium-indium composite as a free-standing wire that was about 8 mm in length and 270 μm in diameter. Additionally, the metal was sort of shot at/ejected onto the substrate for reasons that are still unclear to me (frankly, I think they were just getting their rocks off). They also injected the liquid into a template, so that it would flow into a pre-formed shape. The template was then dissolved and the metal left in place. Finally, the team printed the metal in the form of cute, little balls stacked one on top of the other, which yielded the most media-friendly images. Here’s a video of the different techniques:

Just kidding. That was a scary scene from Terminator 2: Judgement Day. Here’s the real clip:

The paper listed a variety of applications for printing with liquid metal, saying: “The ability to directly print metals with liquid-like properties is important for soft, stretchable, and shape reconfigurable analogs to wires, electrical interconnects, electrodes, antennas, meta-materials, and optical materials.” And to demonstrate that such possibilities can be achieved, they printed a thin metal bridge between two LED lights, which lit up as a result: 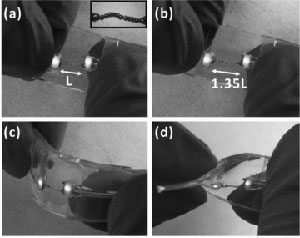 The study was published on July 4, 2013 in Advanced Materials, by PhD student Ju-Hee So, professors John Muth and Michael D. Dickey, and lead author Collin Ladd, who, interestingly enough is only an undergraduate student and, according to Dickey, “helped develop the concept, and literally created some of this technology out of spare parts he found himself.” Could Ladd be the John Connor of the robot apocalypse, as some Hollywood movies would predict, or is he simply a badass college student? Only the future and time traveling robotic governors can tell.

[1] The definition according to Wikipedia, useful for understanding how the metal works: “A eutectic system is a mixture of chemical compounds or elements that have a single chemical composition that solidifies at a lower temperature than any other composition made up of the same ingredients.”