This post is part one of a series of three by Spencer Wright, a strategist at Undercurrent, on the state of the metal 3D printing process. Tune back tomorrow and Thursday for parts two and three, which describe the DMLS process in detail and offer an assessment of the metal additive manufacturing marketplace today.

Last December, in an industrial park in Cincinnati, I watched as Dave Bartosik set up a build platform on an EOS M280. The part he was printing is one that I began designing a full fourteen months earlier, before I had any idea of the intricacies of metals 3D printing, nor the complexity in bringing an additively manufactured part from design to prototype.

While the consumer 3D printing community has coalesced around openness, the industrial market tends to be opaque. Sure, anyone can design parts with free software. But the process of bringing those designs to life requires hundreds of engineering hours, tens of thousands of dollars worth of software, and millions of dollars worth of tooling — and even then, developing a single working prototype is a long and expensive process.

To many people, 3D printing offers a new manufacturing paradigm. It stands for rapid iteration, customization, and distributed fabrication. But today it’s arduous and costly, and the knowledge base needed to enter the market is concentrated in a select few people.

Here, I’ll share what I’ve learned about 3D printing titanium parts so far — and what other designers should expect out of the process as well.

A primer on 3D printing metal

Within the maker and startup communities, a 3D printer is essentially an extremely accurate, robotic, hot glue gun, capable of making complex plastic parts within a few hours. For some people, that means making functional models more quickly, and with less interaction with outside suppliers, than if they were machined or injection molded. For others, it means a couple of desk trinkets. And, for the really ambitious, it provides a peek into a new way of bringing products to market, replete with on-demand, custom-to-order parts, produced just walking distance from where they’re used.

My background is in short-run manufacturing. I spent a few years building custom bicycle frames, and later ran a small prototyping shop, where I designed and tested robotic door assemblies on fast development cycles. When people talk about the need to iterate rapidly, I get it.

For five years, I worked in a shop that could make machined and welded parts on demand. There were always hiccups — prototype development is often more art than science — but, in general, we could, with a day’s notice and a bit of help from McMaster-Carr, take a 3D model and create a useable part from it. So, when I think of 3D printing metal, I keep those kinds of capabilities (which are shared easily by thousands of shops around the US) in mind.

Metals parts are 3D printed in one of three ways:

Though it’s used extensively within the aerospace, medical, and tool & die industries, there are no metal powder bed fusion products on the consumer market today. Which made me think: why not?

When it comes to machine design, humans aren’t nearly as creative as you might think. The basic model for milling machines has been around for more than a century, and, despite the fact that the process has changed significantly during that time, the overall layout of industrial tooling today is much the same as has been since the Civil War. Today’s powder bed fusion machines are no exception: If you squint just right, they look a lot like CNC vertical mills. 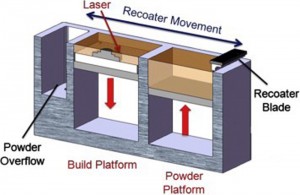 During operation, a thin layer of powder is spread by the recoater blade across the build platform. Then the heat source — either a laser or an electron beam — scans across the build platform, melting powder selectively as it goes. Where the metal is melted, it fuses to the metal around it, creating a solid part. After one layer is scanned, the recoater blade spreads another layer of powder and the process repeats.

Printing things this way is slow; a part the size of a juice glass might take ten hours. The recoater takes a few seconds to spread each layer, and although the laser is moving incredibly fast, it takes some time to scan the cross section of a part line by line. Add to that the fact that each layer is about eight ten-thousands of an inch thick, and you see how anything larger than a thimble would take a long time to complete.

Although powder bed fusion can be done by both lasers and electron beams, lasers are far more common. Electron beam melting (EBM) is notoriously difficult to control, and although it has some advantages, EBM parts tend to have very coarse surfaces and require more post-processing as a result. EBM also suffers from relatively low market penetration; by my count, there are fewer than five service providers for EBM in the US.

Within the aerospace industry, DMLS has a high adoption rate — at least in an R&D context. In fact, my collaborators and primary tour guides to the industry (Dave Bartosik and Dustin Lindley) both began their careers in additive at Morris Technologies, the aerospace DMLS giant that was acquired by GE Aviation in 2012. Between the two of them, there’s about as much experience printing titanium parts as anyone else in the world.

But for all the work that has gone into understanding the properties of additively manufactured parts, the process is still very much in its infancy. It is not in any sense a mature technology, and the result is that each new part you design for DMLS — and, indeed, each new copy of the part that you print — is very much an experiment. Small variations in geometry and orientation can have huge effects on the way that a part prints. The laser’s scanning path is a closely studied subject, but much is not yet understood about it. Even keeping those variables constant, it’s often the case that building the same part on a different machine will produce very different results.

All of which is to say that DMLS is anything but plug-and-play. Even when a design has been optimized specifically for the process, it often takes dozens of tries before a functional part comes out of the printer. And the process of troubleshooting a failed build — even at the most advanced DMLS shops in the world — still involves a lot of trial and error.

In general, parts that benefit from 3D printing tend to have the following traits:

The part I’m building is a seatmast topper for high-end road bicycles. Cyclists want lightweight, custom parts. Custom bicycles are increasingly popular with consumers, and they carry high price tags and long lead times. Broadly, it’s my suspicion that more and more bicycle components will be produced on-demand through 3D printing — if only for the simple fact that within high-end cycling, sexy sells.

At about 60 grams, my part is fairly lightweight. It’s also relatively small, and fits easily within nearly every DMLS machine’s build platform. And, because of its function (seatmast toppers are used to hold a bicycle saddle onto the frame), its structural requirements are fairly predictable. These factors, plus the fact that seatmast toppers are easy for almost any cyclist to install on their own bike, make it a good candidate for 3D printing.

But that doesn’t mean it’s easy to print. My part consists of two cylinders, oriented 90° apart and joined together by a funneled neck. The part’s wall thicknesses fall between 1mm and 1.75mm — roughly .039″-.068″. And it’s critical that these walls not vary much in thickness; if they end up just .010″ thinner, the part could be unusable.

Harder yet, the inner diameters of both of the cylinders must be accurate and consistent. Again, variations of just .005″ can have a big effect here — and if the cylinders end up with oval cross-sections, the part won’t work at all. And the titanium 6/4 that my part will be made of (which is named for its 6% aluminum, 4% vanadium content) is made of is notoriously prone to built-in stresses, meaning that we’ll have to be very careful setting up the build parameters and support structures to prevent the part from turning into a pretzel during the process.

As with almost all 3D printed metal parts, mine will require some degree of post processing; at an absolute minimum, the clamp bolt threading will need to be tapped. But ,because of the physical tolerances listed above — and the mechanical and aesthetic properties of DMLS parts, which tend to be rough and unpredictable — it’s likely that extensive finishing will be required on both the inner and outer surfaces of the part.

In short, my part’s manufacturing process chain (the total number of processes required to make the finished product) was always going to include some subtractive steps. There are many feature types that 3D printing simply isn’t intended for, and I knew going in that this part would require more than one process as a result. But until we picked a build orientation — and built parts that passed fit & finish tests — we wouldn’t know for sure what our total process chain would look like.

See part 2 to learn about how the build orientation affected our process chain, and how we anticipated stress buildup during the process. 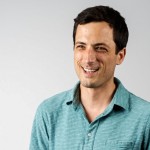