The 3D printing market will continue its stratospheric rise and the market will expand by 25% each and every year until 2020, according to EY’s Global 3D Printing Report 2016.

To compile the report, the company surveyed more than 900 decision makers in 12 countries and nine industries, covering both mature and emerging markets. It also studied the market sales and forecasts before coming to the conclusion that 3D printing will generate $12.1 billion in 2020.

That’s some way short of the most optimistic estimates, which suggest that the industry will generate more than $20 billion a year by that time. But EY, which concentrates on product design and supply chain work in the additive manufacturing industry, highlighted a number of reasons to be optimistic.

24% of the survey’s respondents already use 3D printing and 12% are considering it in the near future. The US is far from a leader in the field, though. 37% of German respondents have experienced 3D printing, while just 16% of American firms had taken the plunge.

Of course the uptake with 3D printing is highly industry specific and the automotive and aerospace industries have rushed to embrace rapid prototyping and limited run manufacturing. In these fields, 20% have already used 3D printing and 29% anticipate doing so in the near future. The ones that haven’t adopted it already cite their own lack of skill as the main reason, with 17% admitting to a lack of in-house knowledge.

So it seems that the original obstacles of consistency and quality have long since fallen by the wayside and a number of companies will have to recruit 3D printing staff in a hurry. This could lead to a severe skills shortage that the educational establishments will have to address with tailored courses. 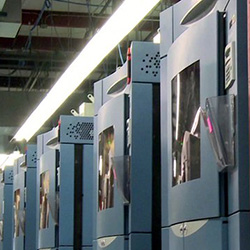 3D printing has already evolved well beyond rapid prototyping and 5% of the companies questioned claim to be using the technology to create end products. 38% expect to use additive manufacturing on a grand scale within five years, if they can get past the perceived cost.

There’s no doubt that replacing an entire production line with 3D printers is an expensive exercise, especially with the speed of development meaning that the printers could be rendered obsolete in a matter of years.

The restrictions on colours and multimaterials are also proving an issue for 12 and 10% of companies respectively. Not everybody is ready to fully commit and using outside suppliers means that companies can take advantage of a variety of materials, cutting edge equipment and no buy-in costs.

41% of the respondents expect to work with service providers while they evaluate additive manufacturing and decide on the best system. The industry itself has to shake out, too, and big business expects deals between 3D printing firms and logistics companies that could change the complexion of the market and make a service deal more attractive than bringing the whole operation in house.

15% of the respondents actually expect that their products will end come from third party print shops and logistics companies in the end, which could mean they just don’t need the same amount of logistics or warehouse facilities if a third party is actually taking care of the supply.

There’s no doubt that most companies will have a printer in their facilities, too. 35% of the respondents believe they will be able to redesign their products from the ground up and take full advantage of mass-customisation, integrated design that replaces a number of separate components with one printed piece. They’re also looking forward to creating internal channels for wires and other integrated parts that will save time, labour and money on the factory floor.

The old will work with the new

Some will use 3D printing in combination with traditional processes, for instance for the fast production of molds that we see today. Of course rapid prototyping, the initial purpose of 3D printing, has already changed the way a number of companies do business. In 57 case studies, additive manufacturing helped reduce the time to produce a functional prototype by 63% and the costs by 70%.

As for the printer companies themselves, EY noted a levelling off of the growth of large 3D printing systems companies like Stratasys and 3D Printing, whereas the metal printing firms have seen a spike in sales. EOS grew by 53% year-on-year, Concept Laser by 54% and Acram by 70%. The main question the report poses is: “Have the metal printing companies set up as service suppliers, too?”

Watch for the consolidation

Consolidation and service departments could be the big news for the years ahead and the larger companies could snap up the smaller players. The report specifically mentions the rumour that HP will buy Stratasys, which could change the industry overnight.

3D printing is growing at such an intense rate that predicting the future is fraught with danger. EY’s Global 3D Printing Report 2016 offers a unique insight into the world of additive manufacturing, though. If you’re in the industry, or even if you’re curious, this should be required reading.