I’m beginning this article on 3D printing services provider ARC Group Worldwide (ARCW) with an impressive chart that compares the year-to-date performance of ARCW shares to 3D Systems (DDD), Stratasys (SSYS), ExOne (XONE) and voxeljet (VJET). There are several material factors at play that lead me to believe that ARCW will continue to outperform these 3D printer manufacturers as well as the market in general over the next 3-6 months, factors I’ll discuss in this article. 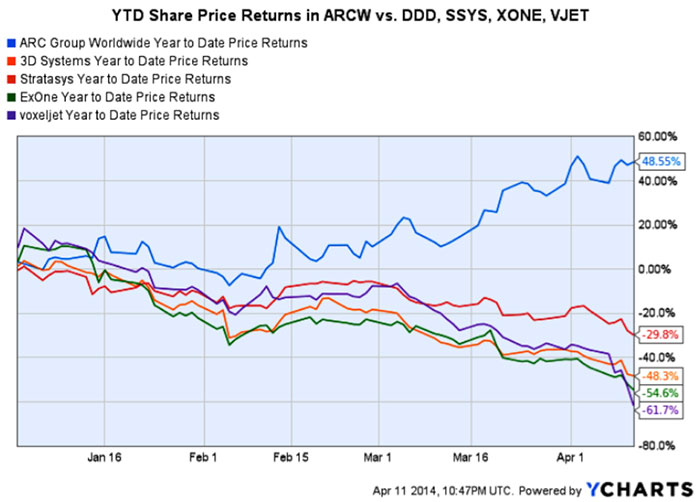 High Growth at a Reasonable Value?  In the 3D Printing Industry?

At the recent Inside 3D Printing Conference and Expo in New York, I was honored to be part of a panel discussion on investments in the 3D printing space moderated by industry expert, Terry Wohlers. One panelist mentioned that for the short term, pure play 3D printer manufacturers don’t have the fundamentals to support substantially higher share prices now that much of the “hyped” air has been let out of their bubbles. Another opinion on the panel was that if you’re investing in the 3D printing industry you can’t look at fundamentals — just buy and hold until their earnings growth can sustain higher share prices.

Personally, I believe there are several companies within the industry right now that have both reasonable fundamentals as well as the fast revenue and earnings growth required to support higher share prices. ARC Group Worldwide is one of these companies and the chart above suggests that the market agrees.

ARC Group Worldwide is the largest metal injection moulding (MIM) company in the world. Headquartered in DeLand, Florida, the company has multiple subsidiaries in the US and Europe, approximately 440 full time employees, and a market capitalization of $213 million. For the trailing twelve month period ARC Group Worldwide generated $76 million in revenue, (which is $20 million more than the combined revenues of voxeljet and ExOne for the period), and reported adjusted earnings in fiscal 2013 of .85/share.

In December of last year, ARC added 3D printing services to its operations with the launch of their 3D Material Technologies division, while also adding renowned 3D printing industry expert Todd Grimm to its board of directors. As a result, ARC Group Worldwide can now leverage existing sales channels from its extensive MIM operations to ramp sales in the new 3D printing division.

“Given ARC is the world leader in metal injection moulding, we quickly identified 3D printing as a complementary technology to our core business. Metal 3D printing in particular dovetails with our metal injection moulding business quite well given the customer base and the fact that the end use is quite similar; since metal 3D printing is still in its early days we believe our incumbent business will position us to be leaders in metal 3D printing.  At the very least our initial results for 3D printing technology in our facilities have clearly demonstrated the significant opportunity associated with reduced lead time and decreased cost across our supply chain.”

What CEO Jason Young then stated last week is really quite remarkable:

So in a few short months, ARC has rapidly grown its new 3D printing services division to position itself as a future market leader in the space, particularly in the fastest-growing space in industrial 3D printing, the production of high grade metal components.

Many investors have focused on the manufactures of 3D printers as the only way to invest in the 3D printing industry due to the high level of media attention applied to the handful of public 3D printer OEMs. With the upcoming US IPO of Materialise, a 3D printing services and software provider, I believe some of that media attention will shift focus to 3D printing service providers. In fact, ARC Group Worldwide, now having “one of the largest capabilities in metal 3D printing today” may receive direct attention from the media as well as from investors unable to obtain what could be a high-demand Materialise IPO allocation. Like ARC Group Worldwide, Materialise is earnings positive. However the company’s 16% revenue growth for 2013 pales in comparison to revenue growth reported by ARC Group Worldwide noted below.

For the fiscal year 2013 ARCW reported the following:

ARC is now well into fiscal year 2014, and while there are many positives in its SEC filings, the bottom line numbers are:

Potential For Earnings Estimates To Increase In Near Term

Average analyst estimates for fiscal year 2014 (ending in June) are $1.19/share, a 40% increase over fiscal year 2013. However, these estimates were made prior to last week’s announcement  of two acquisitions that ARC Group Worldwide states will “add meaningful cash flow” to the company and will be “immediately accretive to earnings.”

As a result, earnings estimates may very well be revised higher for 2014.

Despite the strong earnings growth noted above, (which rivals the growth in any pure play 3D printing OEM), ARCW shares are currently trading at the lowest PE and the lowest price-to-sales ratios found in the 3D printing industry.

*Note: While Proto Labs (PRLB) offers no 3D printing services, I’ve included it due to their CNC machining and injection molding operations.

There are many reasons why management might sell shares of their company that are not inherently negative — such as accessing funds for a home, a big wedding bash for a daughter or grand-daughter, a new boat, etc. However, there’s only one reason for management to buy shares in the open market, and it’s because they believe the company is undervalued.

I invite investors to research SEC Form 4 insider transactions in any 3D printing company, pure play or otherwise. None will show the high ratio of insider buys to sells that ARCW has over the last year. In fact, almost all will show far more open market selling than buying from insiders.

I believe ARCW shares will continue to outperform 3D printer manufacturers and the broader market due to the company’s reasonable valuation and strong projected forward earnings growth. In addition to being an established leading metal injection moulding company, ARC Group Worldwide has quickly emerged to offer “one of the largest capabilities in metal 3D printing today.”

Average earnings estimates of $1.19/share for their fiscal year 2014 may be revised higher soon due to accretive acquisitions announced last week. Earnings growth in the most recent quarter far exceeds earnings growth in any publicly traded 3D printer manufacturer or in Materialise as it readies for its IPO, yet ARC Group Worldwide sports comparatively favourable valuation metrics.

Insiders are buying shares in the open market for a reason. CEO Jason Young may have shed some light on that reason when he explained last week:

“We don’t know of any other companies that have this model which we believe is quite unique and scalable. We have an extensive and high quality customer base with underlying industries that are growing and we believe there’s an exciting opportunity to round-out our product offering while bringing new technology like 3D printing and automatic online quoting software to pioneer the future of manufacturing.”

Disclosure: I own shares in ARC Group Worldwide (ARCW). I have not been paid by ARC Group or any third-party for this article.