Advances in various types of 3D printing have progressed to the level where they parallel the output quality of more traditional methods of production. A good demonstration of this can be found in a remote control car model that was originally produced using injection moulding, and has now been three dimensionally printed using carbon fibre reinforced polymers. A company that was founded by a rapid prototyping expert who has worked with Red Bull racing has worked with a leading manufacturer of remote control vehicles and accessories to make a radio-controlled car almost entirely by 3D printing.

Graphite Additive Manufacturing has teamed up with Schumacher Racing Cars to 3D print a remote control car in carbon fibre reinforced plastic. Graphite printed the parts using the Selective Laser Sintering (SLS) 3d printing process, using carbon fibre reinforced plastic material. The collection of companies set about the project to show that the weight-saving benefits of this production method can be applied to a wide range of other applications in manufacturing. 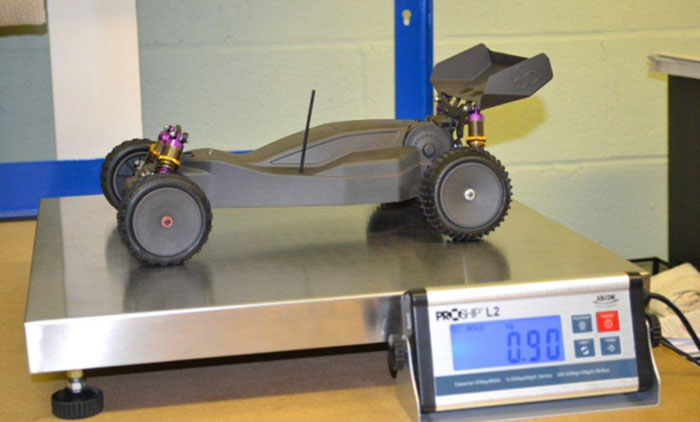 The team at Graphite Additive Manufacturing says that the carbon fibre reinforced material used in this process has the highest stiffness-to-weight and strength-to-weight ratios of any available 3Dprintable plastic material.

The metal components for the remote control car that were not manufactured by 3D printing were bolted straight into the parts that were and these included the shock absorbers and floor pan, along with the obvious nuts and bolts.

The company has strong credentials in this area, as it is headed up by managing director Kevin Lambourne, who previously managed the UK’s largest rapid prototyping department in the 1990’s and also spent seven years at Red Bull Racing using rapid prototyping.