Oventus, an Australian company, has teamed with the Commonwealth Scientific and Industrial Research Organization (CSIRO) in an effort to use 3D printing to aid people suffering from sleep apnea. Accordingly, they suggest that roughly 5% of the population suffer from this disorder that often leads to high blood pressure, cardiac disease and diabetes. The solution the team has come up with is a new device that offers a cheaper and better solution for those suffering from the condition. A simple cast is taken from the dentist and from that point, the joint operation begins and results in a personalised 3D printed device, as explained here:

The CEO of Oventus remains calm in demeanor throughout the video, yet the enthusiasm just beneath the surface is warranted considering the wide-reaching effects of the new appliance. After Neil Anderson describes the awful symptoms of sleep apnea, when the throat collapses during sleep hundreds of times throughout the night, he continues to explain the application and function of the new device. A front airway functioning as a breathing port for the patient, acts as an unobstructed pathway for air to get past all the obstacles: lower jaw, tongue, and blocked nose. 3D printing enters the scene at the end of process

The information from an impression or CT Scan is uploaded and sent to the manufacturing center. The information becomes a device file and receives specific modifications for individual patients. Finally, a 3D printer receives the files and provides the device. “Tens at a time,” according to Neil Anderson. 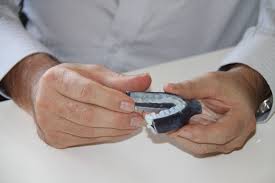 The application is an indication of the shift in manufacturing already evident in the medical field. At the forefront because it deals with human well-being, the medical and dental industry tends to side with what proves itself. As evident by the application from Oventus and CSIRO, 3D printing is continuing to emerge as a facilitator for a more reliable and sustainable future. With this new device, an improvement from the display, 3D printing accounts for preventative care as well as rehabilitation. It is simple and exactly what those suffering from sleep apnea need, reassurance and a safe night’s rest knowing the new wave of technology works for them.