Polaris Industries, the manufacturers of Victory Motorcycles, is revitalizing the iconic Indian Motorcycle brand, and their CEO Scott Wine credits 3D printing with allowing him to bring America’s first motorcycle back to market. Late last year he spoke to Bloomberg TV about how integral 3D printing was to that process.

Over a hundred years ago America got its first motorcycle, and it was an Indian Motorcycle. While the brand has always been sought after and popular, at one time they were the largest manufacturer of motorcycles in the world. Unfortunately during World War 2 they had devoted so many of their resources to producing motorcycles for the army that their bikes became extremely difficult to get in the states. Many of their dealers abandoned them, and this allowed their nearest competitor Harley Davidson to overtake their market share, a blow that they would never recover from. Indian Motorcycle Manufacturing Company and their iconic bikes disappeared in 1953 due to bankruptcy.

While the name was purchased by multiple companies and slapped on bikes for decades the brand had never even flirted with its previous success. In 2011 when Polaris Industries purchased the rights to the brand that all changed. Already well-versed in creating highly sought after and extremely high quality motorcycles, they managed to get done what no one had been able to do previously, reinvent the Indian brand for a modern market, without losing what was special about it in the first place.

Wine used every tool available to him to re-invent the Indian. In the Bloomberg video he explains that when the first motorcycle came out it was leading edge technology, so while trying to revitalize the brand he used the best modern technology available to him. When designing the new bikes, standard clay sculptors were employed, but their work was aided by in-house Stratasys 3D printers. This ability to rapid prototype just about every part of the motorcycle while they designed was integral to the speed that the new bikes were brought to market.

“We actually built an entire bike using 3D printing and rapid prototyping.” said Wine “We have – I would argue – the best clay designers in the world, and we went from their clay design to a bike that consumers could see in a showroom with the fit and finish that you would expect in three months” 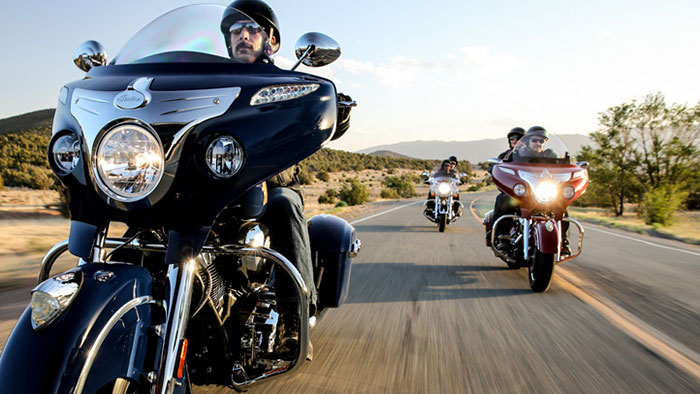 If they had used the traditional designing and tooling techniques that were the only available options as little as ten years ago the prototype would have taken over 15 months to complete. By chopping a full year off of the development cycle Polaris was able to bring three new models to market, not just one.

While I lack the balance to ride a motorcycle myself, seriously my first time on a bike ended with me falling on a BBQ and burning a grill pattern onto my backside, the new Indian Motorcycles are a whole lot of fun to look at. In a time when venture capitalists and investments bankers run so many corporations and they’ve stripped so many iconic American brands of their originality in order to make a quick buck, it’s nice to see a company treating a part of American history with a little bit of respect. While the bikes were debuted last summer, they are expected to go on sale in 200 dealers within the next few months. Head on over to their official site to see more pictures and videos of the new Indian Motorcycles in action.