We have covered the High Speed Sintering (HSS) process being developed by researchers from Sheffield University previously on 3DPI, but recently, the team revealed further progress in their work, namely a new grayscale for the HSS process — one they believe may just be the 3D printing method that can finally replace injection moulding.

Similar to selective laser sintering, HSS replaces the laser with an infrared sensitive ink, but retains many of the benefits that have started to make SLS a popular 3D printing option. In principle, SLS is rather straight forward, a thin layer of plastic powder is laid down on the print bed and a laser melts a pattern into it. Then another another layer of plastic powder is laid down on top of that and the next slice of the 3D model is hit with the laser again and melted to the first and so on. The process has been around for nigh on thirty years, however recent advancements in both material and laser technology has made it an increasingly popular choice for rapid prototyping and low volume manufacturing.

But the process itself isn’t especially efficient, at least not in terms of maximizing the amount of energy put into sintering and what you get out of it. Sintering is when you introduce enough heat to a small grain of 3D printing material, causing the surface of the grains to melt together. However basic physics still apply to plastic, so the grains are only going to melt together so quickly and only so much heat is needed to cause them to fuse together. Using a laser to cause the plastic powder to sinter is like trying to bake brownies with a blowtorch. It’s possible, but extremely inefficient. 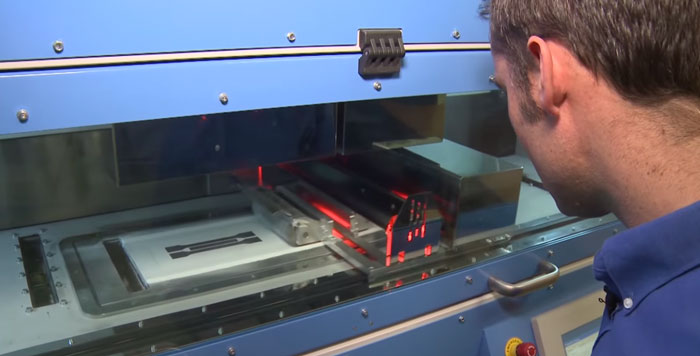 However with high speed sintering the laser is replaced with an infrared lamp and an inkjet printing nozzle. An ink containing a radiation absorbing material made from carbon black is printed into the plastic powder with the ink jet nozzle while a UV lamp follows it. The powder that has been coated with the carbon black ink absorbs more of the UV radiation, causing the individual grains to heat up and sinter together. As with SLS, this isn’t a new process, however Sheffield researchers have discovered that they can alter the amount of the carbon black ink that is deposited, creating different levels of density within the final product.

“All HSS work to date has involved printing 100 percent black, but this doesn’t get the best results,” says Sheffield Engineering Professor Neil Hopkinson. “We found that there is a point at which, as the ink levels increase, the mechanical properties start to reduce. This enabled us to identify the ‘sweet spot’ at which you can gain maximum strength with the minimum amount of ink.”

Currently the material density can be altered up to 40% by printing with the carbon black ink in various shades of gray. By manipulating the printing density, it is now possible for a high speed sintering 3D printer to create single print objects that take on the properties of different materials.

“3D printing has focused on optimising the shape of a part in order to reduce its weight and still retain its mechanical properties,” continues Professor Hopkinson “Printing in greyscale will enable us to optimise the material instead, in a process that would be feasible for commercial manufacture. And by making parts with different densities out of one material, we can also make recycling more straightforward.”

Not only does using less ink change the density of the final object, but it also reduces cost by requiring you to use less of it. Paradoxically the process is also significantly faster than SLS. While a laser may superheat the plastic very quickly contrasted by the infrared ink that heats it up slowly, the pattern can be sintered together as one piece with the UV light, whereas the laser needs to trace the entire pattern one small area at a time, slowing the process down.

Hopkinson sees obvious applications in products as diverse as the aerospace and automotive industries to custom printed sports footwear. Currently the soles in many high end sports shoes are made from two or three materials of varying density, however with HSS that sole could be 3D printed in one piece simply by adjusting the amount of ink used at various points in the printing process. Here is a brief overview of the new HSS 3D printing method and the researchers findings:

Professor Hopkinson presented his findings at the Solid Freeform Fabrication Symposium in Austin, Texas at the beginning of August. While the HSS process is still being fully developed Hopkinson feels very strongly that it could replace injection moulding as many industries dominant high volume manufacturing method.