A few months ago, the mysterious German behind the 3D printing YouTube channel Printing the Revolution purchased himself an Ultimaker 2 and began showing off what the high quality 3D printer could do. But he had never designed his own models before, choosing only to showcase prints of others designs. After only a few months, he decided to combine his two favorite hobbies, sci fi and airsoft, to create his own sci fi-themed airsoft rifle.

As an airsoft enthusiast sci fi fan, the YouTuber had noticed a lack of futuristic-looking airsoft weapons on the market. So, he decided to task himself to try making his own. Designing a working mechanism like a weapon is a difficult project for anyone, much less for someone with no previous CAD experience. And to make a hard job even harder, 3D printing a gun – even an airsoft gun – is illegal in Germany. So, he had to travel to Austria to make it happen. The legality of his hobby is probably why he doesn’t show his face or give himself a name in his videos.To respect his wishes, I will simply refer to him as “The German” for the rest of this article.

The German calls his completely functional gun the M-1 Enforcer. He incorporated a separately purchased gearbox and airsoft mechanism to be able to use standard airsoft magazines. He designed the M-1 with a fire-selector in order to quickly switch from single shot to full-auto, and included handy access panels to the insides of the gun in order to clear jams. The German even modeled a removable battery compartment cover, so the gun doesn’t need to be completely taken apart when it runs out of juice.

As a beginner to CAD, The German chose to use Tinkercad to create the M-1 Enforcer, which does a very good job of showing off how robust the web-based design program is. And the Ultimaker 2 did a bang up job of printing the individual parts. Granted, he probably processed the pieces with some acetone and applied a few coats of paint, but you can’t even tell the parts were 3D printed. 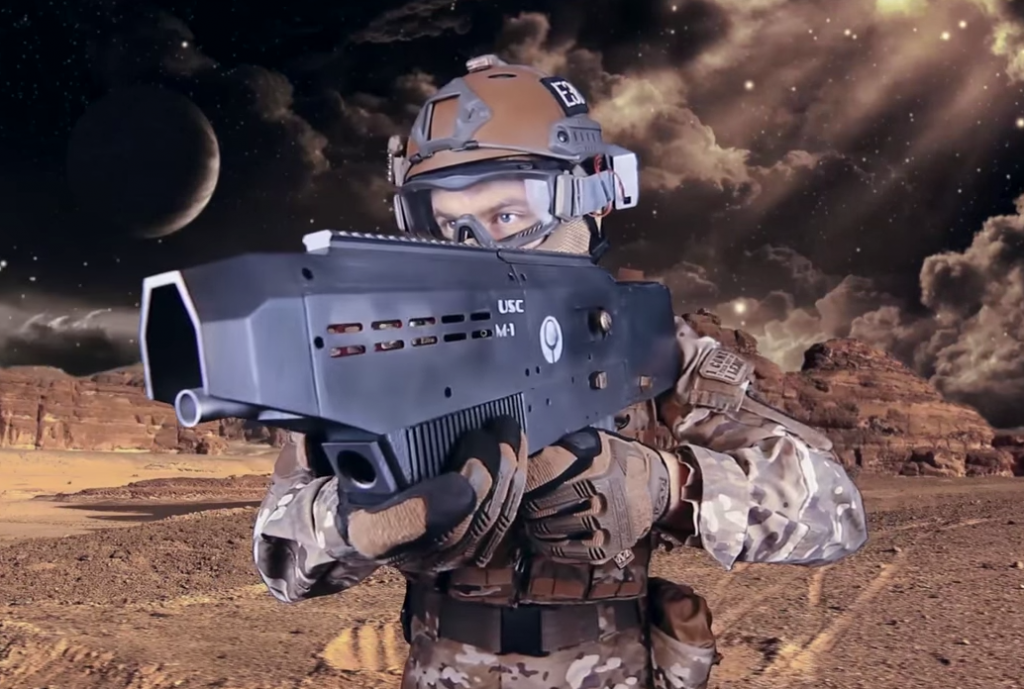 The individual gun parts were printed in black PLA, sold by German Reprap, and the gun was printed in multiple pieces to accommodate the build volume of the Ultimaker 2. All told, the entire gun required several days of printing and assembling, and it’s not bad for a first timer. He points out a few things that he doesn’t like about the design, so The German will probably be taking another swing at his futuristic airsoft rifle.