“Hey, teens!” speaks a totally radical voiceover from the 90’s. “Strap a wild set of 3D prints to your kicks and hit the streets in style ;)” That’s the sort of Gushers–Gak vibe I’m feeling from PUNGAS, a collection of 3D printed shoe accessories whose inventors hope to launch on Kickstarter.

The idea for PUNGAS was spurred through its creators’ original project, HICKIES. HICKIES is (are?) an ingenious method for transforming your lace-up shoes into slip-ons through the replacement of your laces with nifty coloured pieces of elastic called HICKIES. The designers of HICKIES, Mariquel and Gaston, wanted to extend the ability to customize shoewear and, so, have returned to Kickstarter to fund these 3D printed shoe accessories, meant to snap onto your HICKIES (or anywhere else you can find to attach them). 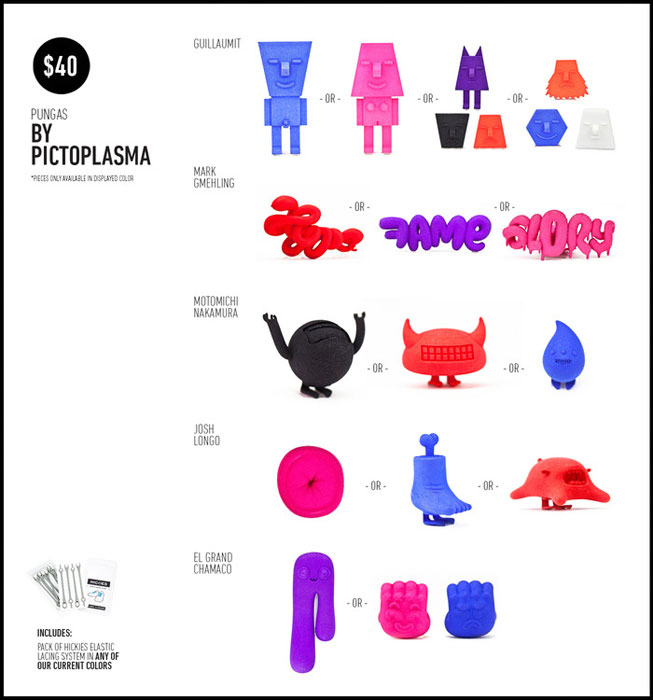 In addition to their own designs, Mariquel and Gaston have found five designers on Pictoplasma, the large character design community, to digitally craft their first set of PUNGAS, which will be printed via Shapeways in a variety of materials.  The idea here is to add some personalized flair to your footwear while also demonstrating the power of 3D printing as a form of manufacturing.  The duo have come up with the tagline: “We want to change the conversation from ‘what COUNTRY are you producing in?’ to ‘what NEIGHBOURHOOD are you producing in?’”  The only problem there is that Shapeways is not a local manufacturer, yet, so, to really live out this tagline, the HICKIES people would have to use a company like 3D Hubs or Maker6, or other service providers made up of a distributed network of 3D printer owners.

A lot of the PUNGAS that the company shows off in their KS video are pretty cute (and they’ll definitely go with a pair of 3D-printed shoes sure to hit the shelves this year).  Little blocky figures to snap onto your sneakers or headphones to wrap around the ankles of your high-tops are somewhat endearing.  I am a little wary of anyone instructing me to “challenge the status quo”, as the HICKIES folks do. The last time someone told me to challenge the status quo, I wound up buying Mountain Dew’s latest edgy flavor, Desert Storm, and it tasted pretty gross.  Check out the KS video below and let us know if they’ve got you convinced: