As I think about computers more and more, I realize that one of the biggest issues with computers is their user-interface, still inorganic and unintuitive. Of all the areas where this has to have the most impact is music. DJs and electronic musicians have been chained to laptops and synthesizers to construct music that explodes beyond the simple 2D interface of a computer screen or the stationary interface of a keyboard with knobs.  Onyx Ashanti, Berlin-based artist and inventor, seems to have also realized this and decided that he was fed up.

If you haven’t heard of Onyx Ashanti already, you will.  If not because you will be into his music, then because he will have influenced the music you listen to, in the future.  He has gone to, and is continuing to go to, great lengths to make electronic music as organic as possible.  Over the past few years and countless Indiegogo campaigns, Onyx has progressed from using wind controllers – MIDI controllers modelled after wind instruments – to developing his own gloves, masks and helmets to create a full-body MIDI music experience.  He’s tried everything, from glass to paper mache, and seems finally content with 3D printed materials to bring what he calls Beatjazz to fruition. 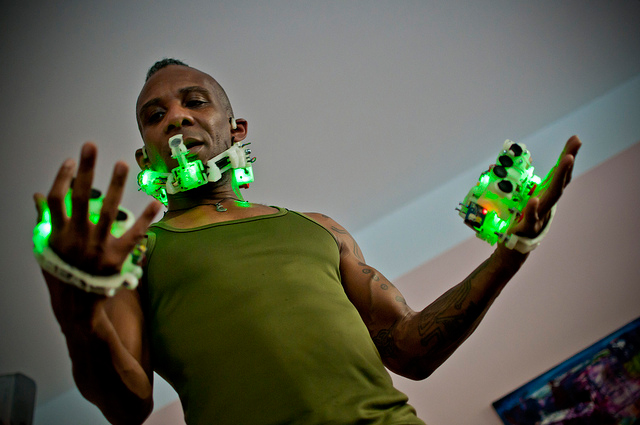 Beatjazz is an immersive electronic music system that frees musicians from the confines of their computer screens and instrument bodies.  With two handheld controllers, a headset and wifi connections, Onyx has made it possible to make the body itself a musical instrument.  The hand controllers are made up of pads for each finger and small joysticks, connected to LED lights that correspond to each pad, all powered by an Arduino. Accelerometers within the controllers allow for gestural manipulation of his music. The headgear is made up of a wind controller and microphone, as well as headphones, which allows Onyx to get lost in stereo sound. All of it is in wireless communication with software on his laptop.

Of course, words never do music any justice, so check out a performance by Ashanti below:

Ashanti told Gizmag in an interview last year, “I couldn’t understand why I had to hold my hands and head in this configuration when a digital instrument doesn’t need an acoustic tube to make its sound.”  But, the reasons for such an elaborate endeavour are probably more complex, as Onyx illustrates in one of his defunct Indiegogo campaigns:

can you imagine what it is like to literally swim in a sea of beats of your own making!? what it feels like to literally “breath” beats and music!?  that is what it is like.  it is beyond addiction…it is religious!  and to collaborate in this space, with others is, to me, a goal of the highest order.  i love performance, but i love collaboration even more. i want everyone to try this!  but i also feel that open source is a concept that we all need right now, so if people are interested in the concept, i am more than happy to share it as openly as is possible.  more importantly, I love what it is and where it is going, so even if no one else wanted to do it, I LOVE it!

The technology and the music is completely free, as Onyx told Smart Planet: “I don’t want to sell it, I want to give it away. I want this to be a new way to interact with sounds. It’s open source: Someone else can go make it and sell it. By the time they get it packaged and shelved, I’ll be further down the line.”

Like all good ideas, this one may never actually come to full actualization. With technological advances and the progress of Ashanti’s own work, it’s easy to imagine tiny electrodes, rather than clunky plastic, embedded into his ideal future suit complemented with space afro hardware and wirelessly connected to a chorus line of robot dancers, virtual or animatronic, that perform a dance so well choreographed and wild that it would beg of a Lady Gaga collaboration.  Watching one of his many TedTalks below, you can already see Onyx Ashanti’s wheels spinning as he discusses his plans for orthopedic MIDI controllers: